Question: Who is Glenn Fleishman? 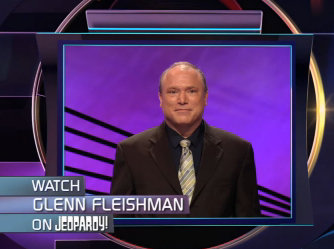 He’s a longtime technology journalist based in Seattle, known for his work for the Seattle Times, Macworld, the Economist and many other publications, not to mention a highly entertaining and informative person to follow on Twitter.

And he’s appearing on Jeopardy! this Thursday night, hoping to uphold a tradition of successful contestants from our region. Yes, he’s up against the Seahawks game, but even if you’re a sports fan, be sure to flip the channel for 30 minutes to support your fellow geek.

Jeopardy is recorded in advance, but of course Fleishman can’t reveal anything about the outcome. However, he was able to share some details from his experience and his behind-the-scenes impressions of the classic show. It’s only appropriate that we quote him in full …

The overall experience and mood on the show: I had a great time on the show. The program is an exercise is good management, which I didn’t expect. It’s a well-oiled machine, and that makes sense. But every single person I encountered, whether it was a contestant coordinator, or a sound guy, or whomever, and every person we saw working on the show that we couldn’t interact with (like the writers and producers), seemed to be having a great time. They all enjoyed being there and worked together beautifully. It’s in its 29th season in this run (it dates to 1964 in its previous incarnations), and some people have been with the show 10, 20, or even 29 years. It’s impressive: they hire well and they obviously run the production well.

The other contestants:  For myself, I was just happy to be called, and even happier to meet all the other players. It’s a tightly selected group, and it’s not surprising that everyone was smart, personable, and professionals (lawyers, doctors, engineers). We did have a couple of educators and college students. One woman, I just found out this morning looking her up, is a senior in college, and I had no idea! Smarter and more mature than her age, to be sure, which is part of what got her there.

The show wants smart people who are personable. They don’t want machines who can answer questions fast, as that’s not good TV. They need a combination of fast reflexes for ringing in, quick minds with trivia storehouses, and good TV demeanor. So it’s a neat group of people that you get to meet.

Impressions of the show’s legendary host: Alex Trebek is a strange, strange man. He’s not a traditional celebrity. He’s pretty anti-technology, which comes out both in the little contestant interviews on stage, and also when he answers audience questions before the taping and during commercial “breaks” as we get a little time to breathe. Apparently, the thing he likes most is driving off to his ranch and clearing brush and sawing lumber. I love that about him. He looks incredibly good for a 70-something guy with two heart attacks behind him, and he’s a got a quick wit and quick mind. The ‘knows all the answers’ bit isn’t just for show, clearly.

Fleishman will be on the show on Thursday evening. Jeopardy! airs at 7:30 p.m. on KOMO-TV (Channel 4) in the Seattle region.