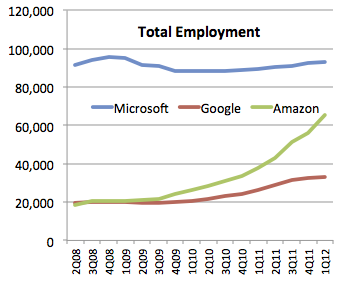 Amazon.com added 9,400 employees to its payroll in the quarter ended March 31, according to numbers released along with its financial results this afternoon. That’s the biggest single quarter of headcount growth in Amazon’s history, according to data compiled by GeekWire.

With its current trajectory, Amazon is rapidly approaching Microsoft in size. Microsoft employs more than 93,000 but hasn’t been growing as quickly as in the past. More than 40,000 of Microsoft’s employees are in the Seattle region; Amazon doesn’t break down its employment by region. Neither company’s figures include contractors or temporary workers.

However, Amazon made it clear that its employment won’t be growing at this pace forever.

“It will moderate at some point, certainly, but given the growth we’re experiencing right now we’re investing and we’re making sure we have the right resources to do that,” said Amazon’s chief financial officer, Tom Szkutak, answering a question from an analyst during a conference call this afternoon.

Szkutak said the “vast majority” of the growth over the past quarter came in operations and customer service, as Amazon brought on former temporary workers on a permanent basis.