I admit I happen to think Jeremy Lin is the Second Coming. We live in a great country at an amazing time when there’s not only an African-American president, but something that would have been even harder for me to have imagined as a kid, an Asian-American starting point guard in the NBA.

But as I was watching Jeremy’s Cinderella run with the New York Knicks the last few weeks, it occurred to me that Jeremy is also an amazing entrepreneur. In the context of the NBA, the Knicks on the court were like a struggling business with dismal metrics. How their fundamentals were vastly improved by this new point guard is a big part of their miracle story.

How is Jeremy Lin doing this as an “entrepreneur”? Here are 5 things I’ve learned.

1.  Be a cross-trained “Scholar-Athlete”

Of course much has been written about Jeremy’s undergrad tenure at Harvard, and how there hasn’t been an Ivy League NBA player since 50+ years ago. But my point is more about eschewing societal expectations to conform to one track vs. another, and thereby broadening your impact. At some point in most young people’s lives, they feel compelled to decide they have to be one thing and not another. They feel they need to choose to be academically rigorous, OR be an athlete. Be musically inclined, OR math focused, etc.

As our careers develop further there is even greater pressure to specialize. At software companies one is either an engineer, OR a non-engineer. Within the product track, you are a program manager or a UX designer, but not both.

Jeremy Lin is an outstanding exception in the NBA, broadening the Knicks’ general fan base from the west coast tech community (Jeremy is from Palo Alto) to east coast intellectuals who also claim him as their own.   He bridges multiple consumer segments together like any great global brand should.  But on the court is where Jeremy’s ‘scholar-athlete’ mentality shines.  He smartly sees the court, deconstructs defensive weaknesses for openings, shoots with perfect form from the outside, gets into the paint to score, AND averages 8.8 assists!

Success in startups requires that founders excel on multiple fronts.  Don’t sell yourself short by limiting your impact to just your core functional expertise.  You have to understand business models and product design. You may also have to speak investor-speak, be versed in capitalization structures, while also relating to the personnel issues of your young work force. You must be a winning public speaker, and a thoughtful student of legal agreements. Entrepreneurs must be “scholar-athletes.”

Too often you hear, “I am an engineer, so I don’t need to schmooze.” Or, “If I focus on my customers, talking to press doesn’t matter.”  The most successful entrepreneurs I know are highly cross-trained.  Take a thoughtful look at your core competencies and shore up the deficits.

2. Get into the Paint

If being a “scholar-athlete” is traversing the horizontal, then the ability to “get into the paint: is about the vertical.  Prior to this current season, Jeremy spent time in the D-leagues learning how to be a much more physical player under the basket.  He gained 20 lbs of heft as a point guard and improved his vertical jump by 3 inches because it was not enough to simply enable a good passing offense, or to occasionally shoot from the outside. Jeremy had to learn to drive into the thick of traffic under the basket.  Taking it to the hole meant shooting while being hit by 275 lb opponents, or releasing the shot at different points of his jump arc against much taller defenders.

Similarly, startup founders have to make things happen by “getting into the paint.”  In the early days, you should be the one to engage directly with customers (even those of your competitors) at conferences or events so that you spark the customer feedback loop.   You should spend several shifts on the phone as a customer support rep to understand the failure points in your product service.  You may have to travel across the country to close your last investor yourself, or hire a key marketing recruit by spending equal time with his spouse. 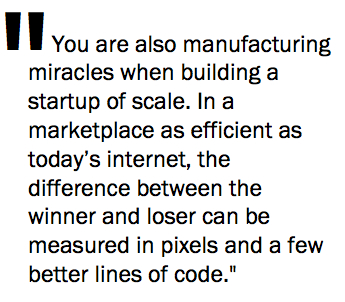 It’s simply not enough to sit back in the office and ‘shoot from the outside.’  If you’re lucky enough in the early days of your startup to have a full ensemble team you can delegate to, that’s great.  But nothing will prepare you to be a more well-rounded CEO or co-founder long-term than to be able to ‘get into the paint’ on occasion. Even Steve Jobs was known to have personally closed top design candidates.

Many of Microsoft’s product successes were due to BillG giving detailed notes to teams about product direction and UX.  More often than you’d think, Larry Page and Sergey Brin offer Google teams specific feature and UI level suggestions to help them compete.  While I don’t advise founders to operate at the wrong level once your company is at scale, there will be plenty of times prior when you simply need to ‘get into the paint.’  Your teammates may even appreciate it.

3. See the Opposite Side of the Floor

With an average of 22.5 points and 8.8 assists per game, the Knicks gain approximately another 30% conversion off of Jeremy’s unselfish efforts.  This high points/assists ratio speaks volumes about Jeremy’s authenticity as a competitor.  With experience, true competitors see “the opposite side of the floor,” and are highly cognizant of where the action is not. Great players set the pick-and-roll on one side, while simultaneously tracking the opposite side to hit an open team ate.  Understanding the connected state of his 4 other team members and feeling who will be in the best position to score is one of Jeremy Lin’s specialty.

Startup founders need to do the same darn thing. I am amazed at how many startups ideas sound like ‘features’ inside of bigger products.  This makes you vulnerable if you only see the extents of the “positive space” that is your product, and not the ‘negative space’ where your product is not. In my own past, some of the best ways to gain that ‘opposite floor’ vision have come from my other non-business side teammates who are highly cognizant of new movements or nuanced changes to competitors’ products.

I give them a seat at the table because they’re just going to see things I can’t see. Leveraging their perspective is akin to gaining 300 IQ points.  A UI designer who use to work in games may be able to discuss new thinking in pay-per-play models.  A former Facebook employee might understand viral co-efficiencies of social features, which may be important to your real estate startup.  Seek a diverse team, and understand ways where they can give you ‘opposite floor’ vision.  You may be surprised by another 30% business yield.

Jeremy Lin has certainly exuded a humble, no non-sense public persona in post game interviews. But a true measure of someone is what they do when they are no cameras around. As an NBA player on assignment in the D-leagues, Jeremy got 1st class airline tickets. But he often gave them up to his teammates. This sent 2 messages to his teammates; ‘I don’t think I am better than you,” and more importantly “I value interacting with you above all else.”

As a result Jeremy was universally liked by coaches and players alike, who all herald his recent ascendence as a function of his hard work ethic and unselfishness. To those who know him, Jeremy is simply someone whom you can’t hate on.

Similarly, startup founders can take heed. It’s not about you. It’s about enabling your team to succeed. My own high school basketball coach use to say, “Your job is to make the other guy look good. If each of you can step on the court with the goal to make your teammates look good, then we all win.”  As a startup founder you are probably the boss, or at least in a key position of decision-making. You should at the very least be cognizant of the distance that others will inherently afford you, and if possible eliminate it. Human nature and our resultant corporate culture are generally hierarchical, but real leadership is knowing how to be more effective laterally, vs. from top down.  You should consider how you can be at the service of your team vs. the reverse. Your teammates will respect you more.

Certainly much of the “Linsanity” results from a perfect alignment of several meta-factors that even Jeremy’s talent can’t control: the Knicks being the team of the world’s media epicenter, starting players being put on injured reserves, and the Asian-American community’s long pent-up anticipation for their own “Tiger Woods.”

But in the words of movie mogul Robert Evans, “Good luck is when opportunity meets preparedness.”  Jeremy came prepared to every practice by arriving 3 hours earlier than the rest of his teammates. When not moving with the ball, he used down time to review video of prior games.  Furthermore, he did not review point-making highlights, but rather missed shots and turnovers (again he was paying attention to the non-obvious).  He was also known to have played a rigorous 3 point shot-improvement game called “Beat the Ghost’ until his 3 point shot percentage went up to 71%.  See the mind-blowing results here in this last-second winning 3 point shot

And still Jeremy did not stop.  He continued with additional workshopping with coaches on footwork, how to set great pick and rolls, and subtle movements to freeze defenders and blow past them. This man prepared with the disciplined and academic rigor of a, well, Ivy league student.  So he really did not emerge from nowhere. He studied this game and earned every inch of success.

You are also manufacturing miracles when building a startup of scale. In a marketplace as efficient as today’s internet, the difference between the winner and loser can be measured in pixels and a few better lines of code. Sometimes, the difference between a .05% conversion rate on a freemium model, vs. a .5% conversion rate is one less click of the interface, and/or crisper upsell messaging.

This is similar to Jeremy’s workshopping. When the premium flywheel was spinning for my last startup, we didn’t want to settle for merely being profitable, but went further to study the user psychology behind new “micro” pricing tiers.

Now that we’ve proven people will pay for a year’s subscription, would they pay for short monthly ones that are effectively more expensive long term?  And how do we up the renewal rate enough that the CLTV on monthly users would end up higher than the yearly payers?

Setting aside the time for this kind of analysis made the difference between a respectable revenue forecast and a great one.

The area of business development with partners was similar. Great startups research their potential partners’ vulnerabilities, and adapt their pitch to offer solutions.  The best pitches I’ve heard from companies who wanted to partner with us were those where they seemed to know even more about our users’ preferences and offered juicier insights than we ourselves had.  They articulated their pitches in a custom-tailored way that acknowledged our UX flow or our pricing sensitivities specifically. By contrast the pitches that registered as ho-hum were the ones where the pitchee merely did a ‘find and replace’ function on the last pitchee and our company name.

I’d wager that if we sampled the most recent successful tech startups, most of the high ROI ideas didn’t come out of nowhere (there are some exceptions but they are not the norm).  They were the ideas borne out of showing up to work at 8:30am, workshopping, and being prepared.