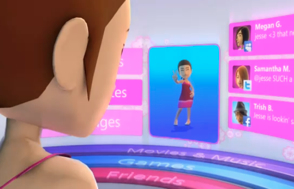 Is this the future of Windows PCs?

ZDNet’s Stephen Chapman has unearthed an internal video from Microsoft’s “Windows Gaming eXperience” team, showing the company’s vision for PC gaming and communications. In short, it looks a lot like the current or near-term reality for Xbox Live and Xbox 360, signaling that Microsoft is increasingly aiming to blend it all together.

The company is clearly hoping to leverage the strength of the Xbox business, which has emerged as a bright spot in its consumer lineup, thanks in large part to the introduction of the Kinect motion sensor last year. At the same time, Microsoft still faces tough competition from Sony’s PlayStation 3 and Nintendo’s Wii in the worldwide console market, and it could help the Xbox unit to forge closer ties with Windows.

This vision to further unite Xbox Live and Windows is not a huge surprise, but it’s notable that the company is still pushing down this path. The initiative started back in 2006 with the announcement of the “Live Anywhere” strategy to connect Windows, Xbox Live and mobile games, allowing people to communicate and play against each other regardless of device or gaming platform.

“Live Anywhere” has been bogged down in part by simple gaming mechanics. In a first-person shooter, for example, somebody using a keyboard and mouse can find it easy to mow down a console gamer fumbling around with a traditional controller. That’s one place where the planned extension of the Kinect controller to Windows 7 could help level the playing field.

In addition, as noted by WinRumors this morning, there are signs that Microsoft is aiming to bring together Xbox Live and Mediaroom interactive television technologies into some sort of unified service. One Xbox executive recently acknowledged to me that this would make a lot of sense, saying that Mediaroom and Xbox Live are “like chocolate and peanut butter.”

So it’s easy to see all of these pieces coming together for the company … at some point.

Microsoft’s Kevin Unangst talked about the situation in a recent Computer and Video Games interview: “We always had the vision it’s just the platforms have started to catch up. We’re delivering those pieces that we talked about years ago but it doesn’t change the focus. It’s a unique starting point to be able to connect all the consoles but what matters is that you can’t lose sight of making great experiences on each platform.”

So it makes sense that the video — from 2010, according to ZDNet’s Chapman — focuses heavily on cross-platform social experiences.

“My friends and I connect and share our experiences across social networks. Our gaming experiences are not limited to a single platform or property, but extend inclusively across the Internet,” reads one of the on-screen messages. Another adds, “My Avatar is my online identity. It represents my style, attitude, and character. I can see and personalize my Avatar on the web, my PC or while playing a game.”

That part about personalizing an Xbox Live avatar on the web is already a reality. The only question: When will we see the rest?