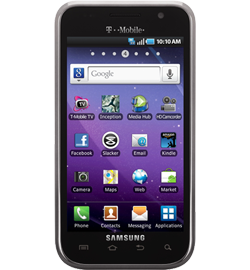 Last week we held a contest for GeekWire’s followers on Facebook, in conjunction with T-Mobile’s Speed Challenge this past weekend at its stores in the Seattle region. GeekWire’s contest was to guess the average download speeds registered by the iPhones and the Galaxy S 4Gs that raced against one another over a three-day span at T-Mobile’s downtown Seattle store.

Most of you assumed, accurately, that the Galaxy S 4G was faster on average than the various iPhones brought in for the challenge — which of course was the underlying point T-Mobile was making with the promotion. But just how much faster?

The average download speeds, according to the company, were 12.7 Mbps for the Galaxy S 4Gs and 1.08 Mbps for the iPhones.

Keep in mind that these were for specific phones in a specific location. This wasn’t a broad survey of the market. That said, a few of you were very close with your entries in the GeekWire contest. Jason Marez guessed 1.09 Mbps for the iPhone, while Shanne Liszewski and Craig Black guessed 12.86 and 12.6, respectively, for the Galaxy S 4G. Others were close, but they were the closest.

So those are our three winners of Galaxy S 4G phones, courtesy T-Mobile. We’re in the process of notifying each of them to get them their phones. (Guys, look for friend requests and/or messages from me on Facebook if we haven’t connected already). In case anyone is wondering, we tracked and included every entry anywhere on our Facebook page, whether on the contest post or directly on GeekWire’s Facebook wall.

Thanks to T-Mobile for putting up the prizes, and thanks to everyone who entered. Let us know if you like this sort of contest, and we’ll explore similar ideas with others in the future.