Seattle tech startup entrepreneurs Mike Koss and Peter Vessenes joined us on the latest GeekWire radio show and podcast to talk about Bitcoin, the digital currency that has been getting lots of attention lately, good and bad.

Koss and Vessenes have been exploring the world of Bitcoin and  thinking about starting a Bitcoin-related development center inside StartPad, the Seattle tech co-working space. Despite Bitcoin’s well-documented mishaps and volatility, they expressed optimism about — or at least deep interest in — the potential for the decentralized digital currency to make a bigger mark on the world.

“It feels kinda naughty admitting on the air I sold Bitcoins for dollars,” Vessenes said. “But it’s just like bagels or something else, fundamentally.”

If you missed the show, or prefer text, continue reading for highlights from our conversation.

What is Bitcoin? For somebody who’s never heard of it before, how do you describe it?

Mike Koss: Bitcoin is a digital currency. The really interesting thing about it is that it’s totally decentralized. No government agency, no bank stands behind it. It was a geek by the name of Satoshi Nakamoto who started it in January 2009. He just invented a protocol and said, if you want to join me in this activity, we will all share in this new world of creating our own currency.

So how does it work, exactly? Can you give us a Bitcoin 101 on the mechanics? How do you get a Bitcoin, how is it created, and what’s the economy like?

Peter Vessenes: Fundamentally, how you get a Bitcoin would be just like how you buy anything else. You could buy one online because they’re digital. You can come by Startpad. Mike will sell you one, or I will sell you one. Or ten or whatever you want. The way most people are obtaining their Bitcoins is just through some economic transfer.

Peter: That’s funny. It feels kinda naughty admitting on the air I sold Bitcoins for dollars, but it’s just like bagels or something else, fundamentally.

So why do this? What’s the advantage of participating in this digital currency?

Peter: I got interested in Bitcoin a year ago now. At the time there was an exchange launched, and they were 6 cents a Bitcoin. And at the time, you could more easily generate them with your computer, so you had three or four types of people back then. You had people who hated FIAT currency, tin-foil hat types. You can imagine, I think. You had crypto-nerds, and that was sort of my background. I studied math and cryptography in college. And you had a few other types we can talk about later.

But you could turn on your computer, run it for a day, and generate three to 12 bucks that you could sell on an exchange, and I thought that was fascinating. 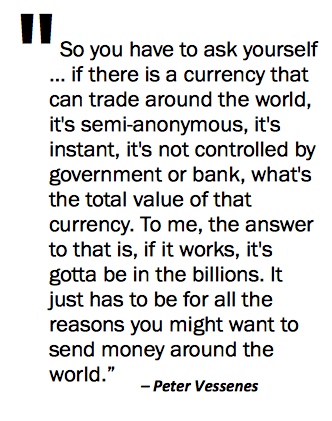 Usually the Treasury would print off dollar bills, in a government-controlled currency. But the way the currency is created here is that it’s “mined,” as they say, which is essentially computers out there going through calculations — right? —  to solve a problem, and if they can solve the problem then they’re awarded a certain amount of Bitcoin. You’re trading computer processing cycles for the currency, is that correct?

Peter: Exactly. The computers do a really hard math problem. It’s easy to verify if they did it, but it’s hard to do. The reason they do it is, cleverly, the math problem is designed to help keep the currency afloat and secure. It’s proof that you’ve supported the economy. The idea was that if you’ve got 10s of thousands of people all doing this, they’re watching each other and this makes the currency very trustworthy. To me, that’s the real brilliance of it.

But that’s what you do, your computer does a hard math problem, and everybody kind of races to do a good job at it. Someone gets lucky and finishes it first, they get right now, 50 Bitcoins.

Mike: Yes, as kind of an experiment. And I did have someone who did rent an office space from me (in Bitcoins). A gentleman named Dr. Nefario.

That’s his alias. I don’t think that’s his given name, right?

Mike: I don’t know his real name. … Peter knows (part of it). But he was actually coming from China and he was going to spend some time working in Seattle on his own project but also collaborating with us. He rented a desk with me, but that didn’t work out for him, actually.

We covered this story on GeekWire.

Mike: He had $600 cash in his pocket, but that was it. He tried to explain Bitcoin to the customs agents (to assure them he would be able to fund his stay) and they really didn’t understand him, and they sent him home.

I can empathize, because even after having sat through a brown bag session on Bitcoin at StartPad, and then hearing you guys explain it here, it is hard to wrap your head around what it is, and what the implications are. It seems like there’s almost a cultural divide here. People who understand computer science are going to grasp what this is, but how can something like that break into the mainstream, if the mainstream doesn’t understand it.

Peter: One way it did is that they went from 6 cents to $30. So a lot of people became millionaires. I’m waiting for grandmothers to give me Bitcoin tips on the subway. I think that’s one way it goes broad. Earlier, when people started, commonly they would just give it away. And I still do that to someone who’s interested, I’ll send them a Bitcoin or two, and I think that’s one way you try and help get an economy off the ground. But to me, fundamentally right now, one of the big problems is, what do you use it for, for somebody in daily life. Not just a nerd or somebody who wants to trade on it.

What do you use it for?

Peter: I’ve hired people for Bitcoin. I haven’t paid Mike for office space in Bitcoin yet, but I may.

But it needs to be generally accepted for it to have real value — in other words, the people that you hire in Bitcoins need to be able to turn around and pay in Bitcoins for something that’s of value to them.

Peter: That’s right. You could buy any kind of digital good you wanted for Bitcoins right now. And digital goods are easier because transferring them is easy. You can buy quite a lot of remote labor. There’s a lot you can buy. But I’m working on (questions such as) can farmers take Bitcoin? These real-world situations are more interesting.

You said the valuation of Bitcoin at one point soared. How has it been since then?

Peter: It’s quite volatile. It’s not that thinly traded, but it is somewhat thinly traded. And so it’s hard to get a sense of the real value. Two weeks before Mike bought some Bitcoins off of me it was at $30. I think it was at $9 or $10 right now. That’s nosebleed volatility for most people.

So what’s the potential for the currency if it is that thinly traded, and if you do have that kind of volatility.

There’s something like 6 million Bitcoins issued right now. So you have to ask yourself … if there is a currency that can trade around the world, it’s semi-anonymous, it’s instant, it’s not controlled by government or bank, what’s the total value of that currency. To me, the answer to that is, if it works, it’s gotta be in the billions. It just has to be for all the reasons you might want to send money around the world.

It seems a little shady.

Peter: It’s interesting. The other kind of people it’s attracted seem to be money launderers. There are people who have weak national currencies who are very interested. They’re inflationary, there’s some problem. In the U.S., some of those are OK. Some of them fall into this black market, money-laundering category. And there are some people who are just bad folks. A senator recently was complaining people are using it to buy and sell drugs and guns. The digital silk road.

But you guys are looking for legitimate uses.

Peter: Absolutely. And only legitimate ones.

What are your plans for running startups based on Bitcoin?

Mike: At Startpad, we have these lunch meetings that are open to anyone who wants to come by Startpad, every Thursday at 12:15. People were actually very interested in this. It’s a very geeky subject, how does this work, exactly, and there’s a lot of very interested technical challenges in how it runs. So geeks are very interested in it natively, I think. And at StartPad we are a co-working space where just we have a lot of startups and software entrepreneurs. So there’s a general interest there. When Peter came and he started working in the Bitcoin area, and then we were going to have Dr. Nefario join us, we were thinking, hey, maybe we have a critical mass here to get several people involved and work on related problems.

Yeah, I wonder how easily Dr. Nefario would get his startup funded in Seattle under that name.

Peter: I love the idea of having a little incubator for Bitcoin. It’s so virtual, there isn’t really a location right now. The founder of the original exchange, I visited him in Costa Rica. Everybody is all over the world. People still like the idea of ‘come, we’ve got an office.’ I think it would be really fun to see what people are working on.

A big thanks to Peter and Mike for joining us. Listen to the full show below or directly via this MP3 file.  We’ll be back this weekend with another show on GeekWire and 97.3 KIRO-FM in Seattle.