Sure, Windows 8 looks snazzy with that tile interface and stuff, but what are you going to buy in the meantime if you want a new Windows machine? Are Windows PCs really keeping pace? And what does Microsoft say to people using or considering Macs?

Microsoft Windows PC evangelist Ben Rudolph, better known as “Ben the PC Guy,” was our guest on the latest GeekWire Podcast, tackling those questions and more — including tips on how to get seven notebook computers through airport security.

If you missed the show, or prefer text, continue reading for excerpts from our conversation.

His current favorite machine: The laptop I use right now is the Samsung 900X, part of the Samsung 9 Series. It’s this super-cool laptop, about 2/3 of an inch thin, weighs less than three pounds, made of this stuff called duralumin, aircraft-grade aluminum, the same stuff they make fighter jets out of. It’s totally cool. Solid state drive, really fast, eight hours of battery life.

On the latest advances in Windows PC hardware design: A lot of people are stuck in the Windows XP mindset. They got a Windows PC five or six years ago, and it’s great, and in a lot of cases it’s still working, but back then, hardware was bigger, it was clunkier, it was heavier. I think right now we’re entering almost a Golden Age of PC Design. You see things like the Samsung, they’re incredibly thin. Lenovo’s got one that looks like a leather book. Toshiba’s got one with a DVD drive that weighs three pounds. There’s some really beautiful things being done with color, with different materials. More often than not, when we bring people in, or if I’m out and I show people this stuff, they’re like, “I didn’t even know that existed. I had no idea.”

On the benefits of that variety: The way we built the business, and the advantage of the Windows world, is that our stuff works equally well across all our hardware partners. So the software is the consistent part across all of it. You can get the hardware that you want, and the experience that you’re comfortable with. 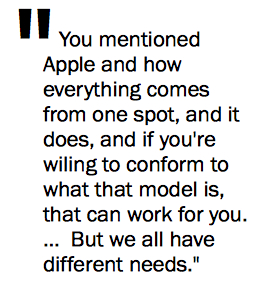 Todd Bishop: This is where I struggle because I understand what you’re saying. But then I go and I use a Mac, and it feels like the whole of the product comes from the same place, if not even the same mind. How do you replicate that in the ecosystem when you’ve got a bunch of different companies out there making hardware for one operating system, and you’ve got to do things to accommodate all sorts of different form factors. Do you feel like Microsoft and Windows live up to that vertical integration?

Ben Rudolph: I think it does, and I think the size of the ecosystem and the size of our user base says that. You mentioned Apple and how everything comes from one spot, and it does, and if you’re wiling to conform to what that model is, that can work for you. …  But we all have different needs.

On his love for solid state drives: If you’ve worked on a PC with a traditional spinning hard drive, and then you go to one with an SSD, the difference is night and day. I have had PCs that are great PCs out of the box, and with a spinning hard drive, maybe it takes 35 seconds to boot, and when you put a solid state drive in it, same exact, identical image, it boots in 10 seconds. … My colleagues joke with me because I put an SSD in everything. I like the fact that Samsung, Lenovo, Dell, HP, Acer, they’re all starting to have SSD options for people.

How he travels: I’ve got this military-grade backpack, and I’ve usually got two laptops in it, I’ve got my Zune, I’ve got my Kindle, I’ve got cables, I’ve got flash drives, I’ve got a camera, I’ve got all this stuff. I was flying to New York for an event, and I took seven laptops with me. I got seven laptops through security, much to the chagrin of the people behind me in line, but I actually got stopped by security, and I had to show them my Microsoft badge, and turn on the PCs. I had to explain what I do, and then I got the, “Hey, while you’re here, my brother-in-law is looking for a laptop, and he’s got 500 bucks to spend, what do you think?”

Here’s the MP3 file for this week’s show.

We’ll have another GeekWire Podcast this weekend, with two great guests.