Our guest on the latest GeekWire radio show and podcast was Ben Elowitz, the CEO of Wetpaint, the Seattle company building an entertainment news and celebrity gossip network makes heavy use of Facebook and other social-networking tools to build and engage with its audience.

We talked about the company’s business model and its efforts to build a next-generation media company from an unlikely spot on the map. Continue reading for excerpts if you missed the show or prefer text …

What is it like building a Hollywood-oriented company in Seattle? Your site is known for attracting people who come to check out gossip and entertainment-oriented stories about what’s going on in the world of celebs. It seems like you should be in Hollywood, not in Seattle, right?

It’s a ton of fun. I think one of the most interesting things about television today is that it’s no longer just in Hollywood. It takes place and unifies people wherever they are. It’s something you see in how audiences consume TV, where they’re on their phones SMSing each other and on Facebook while they’re watching. It’s the same thing we see when we’re creating content and following the TV shows ourselves. We’ve got an editorial staff that’s in Seattle and New York and people in L.A. and other places. They all have one thing in common, they love entertainment, they love to write about and watch TV shows. 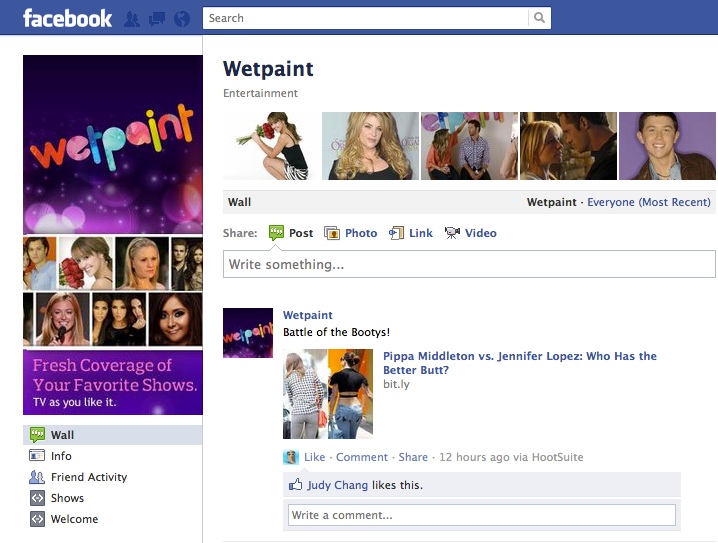 Let’s take a step back for people who may not be familiar with Wetpaint. Paint us a picture, if you will, of what this company is, how you got started, and what you do today.

We started what we’re doing now with the idea that we needed to build a next-generation media company, and the way people are actually engaging in everything from entertainment to news to other categories is changing. The biggest thing is they’re doing that all socially on Facebook and Twitter and other ways. So we said, let’s create a media company that’s oriented around the social networks, and let’s start with the first category that we cover in TV and entertainment. We did that and in the last year since we launched our TV category we’ve already reached 3 million people each month, every month in and out, and as we do that we’re reaching more and more people through Facebook and Twitter especially.

You pivoted about 12 months ago as you said, and you moved into this entertainment niche, but you really kind of started as this network of wikis. Anyone could come to the site and create a wiki. Why did you make that transition out of the original Wetpaint to what it is today?

When we first started we knew people were going to be publishing content and consuming content differently online because of the social networks and we started with a service that let people create their own sites, and we’ve seen literally millions of people do that. As they’ve done that, we found the thing they love to talk about most together on those wiki sites was television. In doing that, a year ago, we realized we can do a lot better for them, we can serve our audience better — especially the women who come to our site every month — if every single day we’re not only supplying content written by other users, but if we have an editorial team. Back to your question about Seattle, that’s where we started to say we can use editorial folks in Seattle and elsewhere to help us do that. 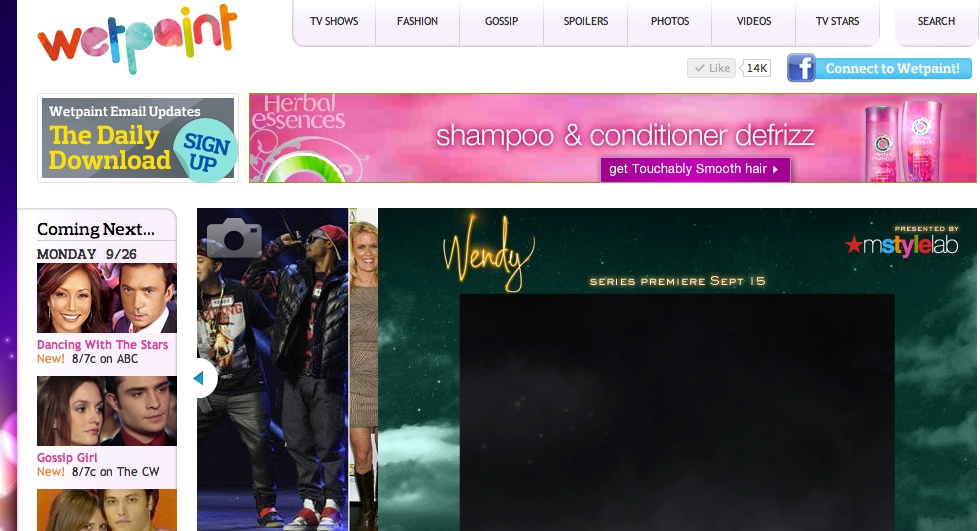 So when people go to Wetpaint, what do they do? Say you’re a reader of the site, you mentioned that people are communicating through Facebook and Twitter a lot. How are you addressing that in what you offer on Wetpaint?

First and foremost, since we launched a year ago, we have over a million Facebook fans. That’s the No. 1 way that we invest in to reach audience. So people sign up on Facebook to have our Gossip Girl coverage or our Grey’s Anatomy coverage or our American Idol coverage coming to them every minute of every day in their newsfeed on Facebook. They consume it there, they interact with it there, and comment and like and have discussions. And they also come over to our site and watch videos and take part in polls, and everything else there.

It’s a fascinating approach. I think if you talked to a traditional media company 10 years ago, and told them, hey, the primary place you’re going to be reaching your readers, at least initially, is on this other site, this is a complete upheaval of the entertainment world. It really reflects how we’re all consuming content, but are you somewhat wary of not controlling the entire experience yourself?

It’s the opposite. We’re elated. And we’re elated because media hasn’t been working online. And it is so hard today to make a digital media website profitable, and the giant media companies — folks like Hearst and Conde Nast and all the way to AOL and Yahoo — are all struggling with the difficulty of how to make these properties really profitable, the way companies like Time Inc. was decades ago. We said, what is working is the social trends here, the usage of Facebook and Twitter. And for us it’s been a huge source of not only audience on a one-time basis, the way it has been for a lot of companies, but each and every day we have people come back. Just to give you a quick sense for that, in Facebook in particular, we have a million fans. We reach each of those fans approximately 30 times a month in their Facebook news feed. I don’t think there’s other digital media companies out there that have that kind of relationship with their audience.

So how are you monetizing that audience. It’s on this other platform. Is there a money-making scheme in that somehow?

At the moment, we focus on really rounding out the experience, let them have an experience in Facebook but also bring them to our site or our mobile site.

So the goal is to get them back to the Wetpaint properties.

We do both, we like to engage them where they are and give them an even more complete experience when they come to Wetpaint.com or when they download the Wetpaint apps, which we’ll be offering soon.

Listen to the show below for the full interview, including a conversation about covering the likes of Kim Kardashian and Snookie. The interview with Ben starts around the 11:00 mark, after the news segment.

Also listen directly via this MP3 file.  We’ll be back this weekend with another new episode on GeekWire.com and 97.3 KIRO-FM in Seattle.