Joining us for our latest GeekWire Podcast was Andy Sack of TechStars Seattle, Founders Co-op and Revenue Loan — the hard-charging startup guru whose clarion call for the Seattle tech community is to “Get F—ing Aggressive,” commonly abbreviated “GFA” in polite company (and on G-rated podcasts).

We had a great discussion about what’s happening, what’s working and what needs to be fixed in the Seattle tech startup scene, along with a little debate about the relative merits of one particularly high-profile local startup. If you missed the show, or just prefer text, continue reading for edited excerpts from our conversation.

How he got involved in TechStars: It started in Boulder four years ago, and very quickly they had immediate success. In the first year of the program in a local city, I think seven companies out of their first class got funded, they were all angel funded companies. And since then, four year later, you look at what’s going on in Boulder today, the enterpreneurial community is thriving, the angel community is thriving. When TechStars is done, seven, eight of ten companies are getting funded, and they’re not just getting funded by angels, they’re getting funded by institutions. So institutions have  started to move downstream.

How that led to TechStars in Seattle: I actually was a mentor to the Boulder classes in the early years, I saw what was going on in Boulder, and I was like, I want that for Seattle. Seattle needs a kick in the rear end, and so I stepped up and spoke to them, and we decided to partner together to bring TechStars here. And I did that in collaboration with the entire venture capital community, and really that’s what TechStars is about. It’s about community-driven, community-supported, and so there’s a whole group of mentors involved, as well — 70 of them — and so we work to support the next generation of entrepreneurs in Seattle.

The trends he’s seeing at TechStars: A number of companies are certainly looking towards the mobile web. We had a couple of companies in TechStars that were more game-oriented, so gameification is a trend. Social is a trend. Pretty much what you see in the broad technology landscape you’re seeing in the applications coming in to TechStars.

Todd Bishop, GeekWire: What about traditional software? Does anybody build a startup around a .NET program at the core?

Andy Sack: You have to remember I’m a reformed entrepreneur, so I had four startups myself. Since turning into a professional investor and supporter of entrepreneurs, I can’t think of one. I’m sure I have (seen one) but I can’t think of one. I can tell you I see them, actually, at RevenueLoan, where we focus on areas that are specifically not sexy, areas that are not trendy but are really core businesses that have revenues and profits. 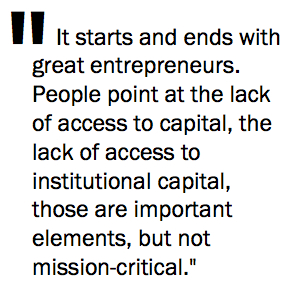 John Cook, GeekWire: What’s it going to take to see a new, large technology company coming out of Seattle?

Andy: I agree that we want one, and would the community benefit? Absolutely. That’s really at the root of TechStars — we plant ten seeds, the community gets behind them, you get behind them, we help them. In the Bay, that community exists almost despite itself, it’s thriving so much. It now exists in other cities, it exists in Boulder, it exists in New York. I firmly believe you’re going to have me on the show next year and the year after, and we’re going to look back and be, like, wow, that was an important moment in the development of the tech scene in Seattle. … I would say today there are a small handful of companies — Cheezburger comes to mind as an interesting company to watch over the next few years. Because actually I think it has possible potential to be a bigger company.

John: Doesn’t that surprise you that a company that’s based around FailBlog, and comedy and cat pictures can be kind of our emblematic company in Seattle?

Andy: No, it’s no different — if you had said that about Twitter, what the founders of Twitter described as the ice cream of Internet, it was a messaging platform, we’re going to to compete with email. It never would have thought it would have caught fire the way it did.

Todd: Yeah, but Twitter really changed how people operate, day in and day out. Cheezburger, it’s a collection of web sites. It’s a content company.

Andy: Yeah, but you’re underestimating that it’s changed the way a bunch of people operate day-to-day. It has a loyal following that are going directly to them, not to Google, and consuming content on a daily basis. It’s affected a huge number of people’s daily usage. So we look for those companies at their most nascent stage at TechStars. We’re planting those seeds and hoping they follow in those footsteps.

John: What’s missing in Seattle? I pointed out that we’re missing that real, big consumer Internet company. Is there something else that’s missing that’s maybe not feeding that? What you’re doing at TechStars is trying to help, but it’s a new program, you’re not going to see the results of that for maybe three to five years. What else is missing.

Andy: Well, anything that we’re talking about now isn’t going to get fixed for two to four years anyway. So I actually think TechStars is well on its way toward making that impact. I have this conversation a lot. I spend a lot of time. I’m on a personal mission to invigorate, revitalize, you choose the word, the Seattle tech scene and make it more successful, more on the map than it is. … What the city needs is great entrepreneurial talent. We need to recruit better entrepreneurs from large companies but also from other areas. I think we need more exits. It starts and ends with great entrepreneurs. People point at the lack of access to capital, the lack of access to institutional capital, those are important elements, but not mission-critical.

To hear Andy’s comments on those and many other topics — plus our news roundup and the answer to our latest Name that Tech Tune contest — listen to the full audio of the show below.

Here’s the MP3 file. Check back this weekend for a new episode.