Seattle’s KING-5 is doing something unusual later this month, or at least something unusual for a regional television station. It’s bringing together a bunch of developers, designers and news geeks for a weekend hackathon, Oct. 14-16 at Adobe in Seattle’s Fremont neighborhood.

The event is called “Hacking Seattle News,” and the goal is to come up with new ways of distributing and consuming local news. Registration is still open, and it’s free to participate. (Amazon.com is a sponsor.)

To find out more, including details on how the station is dealing with the resulting intellectual property, I spoke today with Mark Briggs, the entrepreneur and author who works as KING 5’s director of digital media. He noted that the event is an outgrowth of discussions that KING has been having with members of the tech community for a while, and he credited Social Media Club Seattle VP Shauna Causey for originally suggesting the hackathon.

What is this event you guys are having?

Briggs: It’s very much an open-ended innovation event where we hope to bring together some of the best developers, designers and other talented individuals from the Seattle tech community and task them with a problem that has yet to be solved, and see what they come up with. We’re just excited about working with the Seattle tech community and crowdsourcing innovation a little bit — trying to get out of the four walls that we live in at the TV station and interface with the really vibrant tech community that we have here.

You said it’s a problem that hasn’t been solved yet. What is the problem?

Briggs: The problem really is trying to build, for local news consumers, more of a relevant, brand-agnostic news service. I don’t know what the product is going to look like at the end — whether it’s going to be a website, a mobile app or maybe a combination of the two. We’ve got all of this incredible local news and information that happens on local blogs, on the mainstream news sites, on the other news sites, like the Stranger, and on Twitter, and even in Facebook and social media. There’s just this incredible content, and incredible local information underneath the surface. We want to give people access to that news in a way that has relevance to them, maybe based on where they live or what they’re interested in, or what their friends are interested in — to try to build in those layers of relevancy that we see being very successful on other sites around the web, and bring that into a local news perspective. 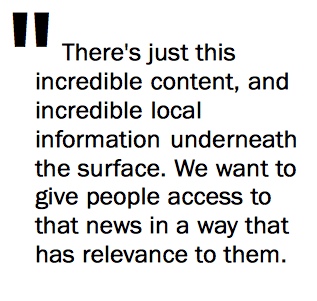 Whatever product or projects result from the hackathon, what’s going to happen to those, how are you handling the IP/ownership issues?

Briggs: What we’re going to do is require everyone to work with open-source technologies, and then that will allow the product or the project, or whatever comes out of it, to be available to anyone to develop in other cities or maybe in Seattle if they want. Then we’re going to take that code and that project and hope to develop something ourselves. From an IP standpoint, we would be sharing it with the people who create it. Right now we don’t have any set plans of what we would do with it, because we don’t know what we’re going to end up with, but the idea is to do it a in very open-source, for-the-community, by-the-community mode. And really what we’re hoping to do is task the people who attend with building a local news service that they would, in fact, use. We obviously have some resources here at KING to make that happen and to manage it going forward.

So if you bring the code into your shop and then make enhancements to it, would you then give that back into the community, as well?

Briggs: Exactly. We really are trying to make this a community project, and I don’t see it ending up on KING5.com. If we develop it, we’ll develop it as something separate, as a community-focused project. It would be very separate from our current brand.

I hear there’s a prize?

Briggs: There is a prize! Obviously one of the tricks in being a big media company and hoping that developers will give up a weekend to hack with you is motivation, and so we thought we could do a couple things. One is to obviously offer a cash prize to the winning team, and so we’re going to give away $10,000 and hope that that’s some motivation. And we’re going to produce a documentary that’s going to air on television. And it’s going to be about the whole hackathon culture, which I think is really interesting, and something that maybe the more mainstream audience doesn’t know a whole lot about. We’ll obviously end up interviewing some people who’ve been through Startup Weekend, or some of the other events to tell the story of why passionate tech enthusiasts give up a weekend to work on somewhat crazy ideas — what they get out of it, and how they’re motivated by it. I personally think it’s fascinating, and having explained it to people within the TV station who certainly are not part of the tech community, they’re a bit perplexed as to why people would actually do that, so I think it will be an interesting story to tell.

What kinds of people do you expect to attend?

Briggs: I don’t know who I expect, but we’re certainly hoping that we’ll get a cross-section of talented web developers, mobile developers, designers, some technologist API wizard kind of people. We also have a slot on the Eventbrite site for news geeks. There are a fair number of news geeks here in Seattle who are very interested in the intersection of news and technology and what’s next for news in the digital age. Essentially we’re just hoping we get a bunch of smart people together who can play off one another’s ideas and develop something really cool that they, in turn, will be proud of and be able to point to and say, ‘Here’s another step forward in the evolution of news in the digital age.’ If that were to happen we would consider it a huge success.

[Editor’s Note: GeekWire is a media partner of KING-5.]