A favorite tech industry truism is that Microsoft got where it is today by copying others. Now, it’s finally copying itself.

With the type of fanfare usually reserved for the announcement of each holiday season’s must-have Elmo toy, Microsoft last week launched its “playful learning” initiative, fully propelling Kinect for Xbox 360 into the children’s market. A key part of the initiative: a partnership with Sesame Workshop and its venerated Sesame Street television series.

The new “Kinect Sesame Street TV” will, starting next spring, use Kinect’s motion-sensing camera to let kids interact through voice and gesture with the show’s characters, so Big Bird, Grover, Ernie and others can respond based on what a child does. A season of interactive shows is being filmed and Microsoft says overall, there will be interactive versions of TV shows, new content just for Kinect and classic Sesame Street video to round out the offering.

Dave McCarthy, general manager for Kids and Lifestyle Entertainment at Microsoft Studios, stated at the launch event that, “By using Kinect, we’re engaging interactively in those experiences in a way that’s never been done before.”

It seemed the kids’ TV folks were happy, too: “Microsoft’s technology is a unique advancement that enhances the viewing and learning experiences of children who watch ‘Barney & Friends’ every day,” noted John Hollar, executive vice president of PBS Learning Ventures. 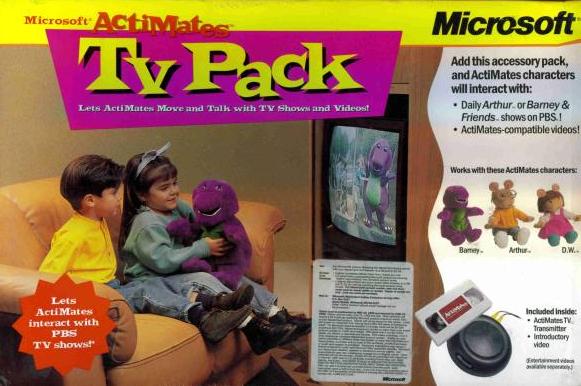 Yes. Barney. Because unnoticed – or perhaps obscured behind the tech industry’s Wall of Forgetfulness that is the dot-com boom and bust – was that Microsoft made similar stirring claims in 1997, fifteen years before the planned 2012 launch of its latest pioneering kids’ interactive TV product line.

Fire up the Wayback Machine, and you’ll discover in February 1997 Microsoft unveiled the first in its “early learning system” of plush toys, ActiMates Interactive Barney. This cute peripheral (or demon device, depending on one’s perspective) was, at 16 inches, sized for kids ages 2 through 5, animated, and used a wireless transmitter to let Barney comment on episodes of his PBS show. Barney could also interact with his own Microsoft software, talk, sing songs and use embedded sensors to directly play games with kids.

ActiMates Interactive Barney was followed, for 4-to-8 year olds, by ActiMates Arthur and ActiMates D.W. (from PBS’s Arthur series) and, may fading memory deliver my retinas from the experience of seeing them live at the annual Toy Fair in New York City, four ActiMates Teletubbies.

All the ActiMates toys were tied to their respective television series. All had a huge Microsoft marketing push, and the well-respected kids’ programming powerhouse PBS, behind them. Awards were achieved from parenting publications. Yet, like a cheesy science-fiction show that features flailing robots and not much else, the Microsoft’s ActiMates series was cancelled after three seasons.

There are a number of possible reasons Microsoft’s ActiMates didn’t continue. They were too expensive: At launch, they cost $110 each –  just for the plush. The wireless transmitter for the TV was another $65. That’s $175 to interact with a public television show, never mind the extra charges for specially coded videos, software and a second wireless transmitter for the PC. By the Teletubbies era, the price itself wasn’t quite as plush: $60 for the ActiMates figure. But by then a pricey perception had been established.

In addition, the ActiMates “system” was perhaps too complicated for consumers’ then-familiarity with personal technology (don’t forget, fifteen years ago just about every connection required a wire). It could be the wrong follow-on characters were chosen after Barney; Arthur reportedly didn’t sell as well as his purple precursor. And finally, Teletubbies aside, they may have been a bit too creepy.

I recall testing Barney on a friend’s 3-year-old son. He was fascinated when directly interacting with Barney – peek-a-boo was a favorite game. But when watching Barney & Friends together, as the Purple One chattered on about his doppelganger’s televised doings, the boy covered the toy’s eyes to again play peek-a-boo. Barney, about as able to multi-task as an early iPhone, ignored him. As though the child was no longer there. 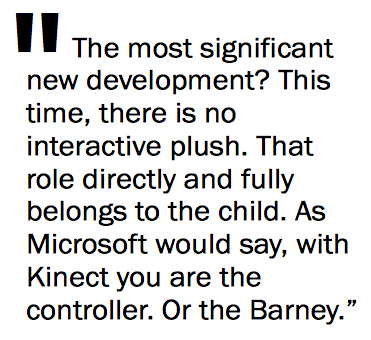 This time through the tube, though Sesame Street is yet again a well-liked children’s series, there are important differences. The Kinect and Xbox 360 hardware is known and established, unlike the earlier ActiMates technology. Game consoles are a business model that Microsoft understands now, more so than it did the fashion industry of toys then. Retail customers are far more comfortable with tech today. And perhaps Redmond will introduce Kinect Sesame Street TV at a truly affordable consumer price point.

The most significant new development? This time, there is no interactive plush. That role directly and fully belongs to the child. As Microsoft would say, with Kinect you are the controller. Or the Barney.

“Kinect Sesame Street TV has the potential to redefine educational television,” effused Microsoft’s Jaymi Bauer during the launch event. And that could be true. Despite its convenient public amnesia on where it has pioneered before, Microsoft may yet succeed in interactive kids’ TV.

Because Microsoft keeps learning from a forgiving teacher. Itself.