OK, we can finally let you in on a secret we’ve been keeping here at GeekWire: A “60 Minutes” crew has been in Seattle working on a piece about Microsoft co-founder Paul Allen, his new book “Idea Man” and his complicated relationship with Bill Gates.

We’ve known about this because John and I were asked by the 60 Minutes producers to help with background information on Microsoft, Allen’s ventures, his role in the Seattle community, and the Gates-Allen partnership. We also spent time talking with correspondent Lesley Stahl when she was here — a memorable experience that only increased our respect for her as a journalist. 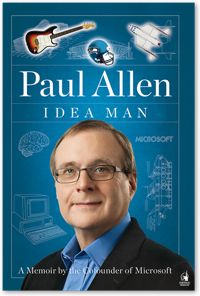 The piece airs Sunday, and a preview just went up on the 60 Minutes site with some interesting nuggets from Stahl’s interview with Allen. They are his first public comments since the controversy surrounding his candid portrayal of Bill Gates in the book, which reportedly has caused a “rift” between the longtime friends.

In the preview, Stahl asks him if it’s a “revenge book.” Allen answers, “It’s not about that. I just felt like it’s an important piece of technology history, and I should tell it like it happened, and hopefully people understand and respect that.”

About his relationship with Gates, he says, “There’s a bond there that can’t be denied, and I think we both feel that.”

At the end of the clip, he says he and Gates haven’t yet talked about the book, but they’ll no doubt have a discussion at some point, and Allen doesn’t think there will be any need to apologize.

In a related writeup on the 60 Minutes site, Allen addresses the controversy surrounding his patent lawsuit against Google, Apple, Facebook and other tech titans: “I guess I find [the criticism] somewhat surprising, because I invested a huge amount to develop these ideas,” he says.

John and I don’t expect to be in the segment, but there’s a chance you might spot us in some of the related online materials after the piece airs.

By the way, I’ll also be interviewing Allen on stage April 22 at Town Hall Seattle. Advance tickets are sold out, but some will be available at the door if you’re interested in hearing me quiz the man himself.