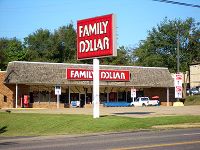 Looks like T-Mobile is serious about this whole low-cost wireless provider thing.

Two weeks after inking a deal to sell mobile phones at 7-Eleven stores, the Bellevue company tonight announced a retail agreement with Family Dollar stores. The discount chain will sell a prepaid T-Mobile phone, the LG GS170, for $30 in nearly 6,000 of its stores across the country.

That’s the same prepaid phone being sold at 7-Elevens, for the same price.

The retailer, based in Mathews, N.C., has partnered with T-Mobile since 2003 to sell mobile airtime. Family Dollar says it’s now one of the nation’s largest  mobile airtime retailers.

T-Mobile USA, which is in the process of being acquired by AT&T, recently lost its retail agreement with Radio Shack amid a strained relationship between the companies. T-Mobile has been putting executives on the front lines in local markets in an effort to revive the business.

The company, a unit of Deutsche Telekom, has been losing subscribers on long-term contracts but adding prepaid customers in recent quarters.