[Updated below with Microsoft statement on the issue with the image]

Microsoft this week was awarded a patent on something it calls “virtual skywriting.” It’s a great phrase, but the reality isn’t as cutting-edge as it might sound. And in an odd twist, the company’s patent application used a well-known, unattributed photo of real skywriting as a purported example of its virtual skywriting system “in use.”

According to the patent filing, the technology works like this: Someone snaps a picture of a scene, including the sky, on a phone or other mobile device. The user then transmits a request to the virtual skywriting service, which takes into account the location where the picture was snapped and superimposes some “virtual skywriting” — a message or picture designed to look like real skywriting — on top of the image.

Apart from the novelty, it’s not clear why anyone would use such a service. There’s no indication that the company plans to bring anything like it to market. But Microsoft found it significant enough to apply for a patent on the technology in September 2008, and this week the U.S. Patent and Trademark Office deemed it worthy of one.

Here’s where it gets really weird. In the patent application, Microsoft included a photo that it described as “an example of virtual skywriting in use.”

In reality, however, the picture the company used was an image of actual skywriting. We know this because an eagle-eyed GeekWire reader pointed out that it’s an image of real skywriting over New York City from 2001, part of the “Clouds” public art project by Vik Muniz. (NPR recently featured the project online and included the same picture.)

It’s hard to see Microsoft’s use and description of photo as anything but misleading — suggesting to the USPTO that the company had a working prototype in action at the time of the filing.

Not that it’s the most consequential technology in the world, but accuracy in patent filings is an important principle at a time when Microsoft and others are pushing to reform the system. I’ve asked the company if it can explain what happened.

[Update, Thursday June 23: Microsoft’s statement in response to our inquiry: ““The use of the skywriting image in the patent was an error and Microsoft will immediately submit the patent for re-issue proceedings to correct the drawings. Microsoft regrets any confusion caused by this error.”]

Here’s another diagram from the patent filing showing how the virtual skywriting system would work. 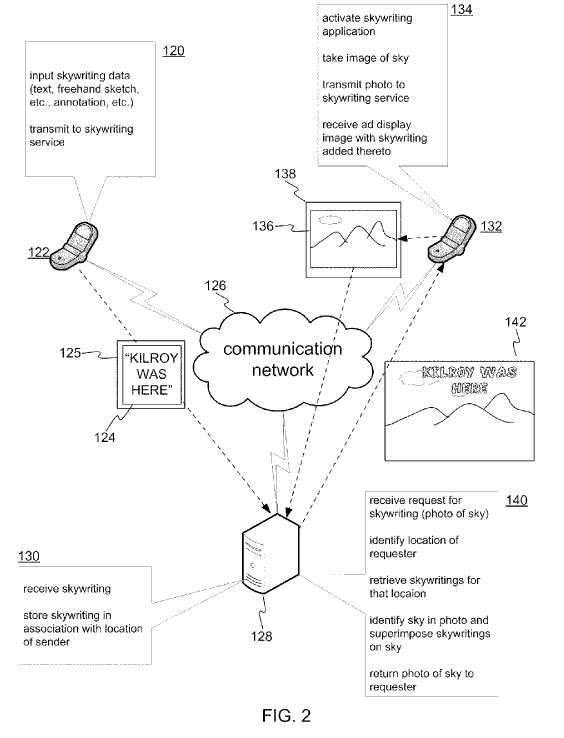