Microsoft has made a full-length feature film — a professionally produced documentary on the startup life, of all things — and it’s slated to premiere in November at the Napa Valley Film Festival. 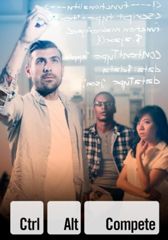 That’s the unexpected news today from the company’s BizSpark program, an initiative inside Microsoft that provides tech startups with access to the company’s software and development tools. Called Ctrl+Alt+Compete, it tracks the entrepreneurs behind five companies: Aboutone.com, LiquidSpace, POPVOX, Guardly,and Supergiant Games. Ben Huh of Seattle’s Cheezburger (also a member of the BizSpark program) also makes an appearance in the trailer above.

Microsoft’s Daryll McDade acknowledges the novelty in a post announcing the project: “Right about now I’m imagining that you’re thinking to yourself, ‘Microsoft made a movie? Really??  What the…?!’ ”

McDade explains, “Building a startup from nothing to something is hard—REALLY hard.  There is a “story behind the story” of just how hard it is for these ideas to go from inception to reality and become the products and services that we use every day.  It’s a story of the power of people pouring their passion, drive and dedication into building something that changes the world—no matter how hard.  We believe that is a story worth telling and sharing.”

The company says Ctrl+Alt+Compete will be released more broadly after the Napa premiere. More details on the film’s YouTube Channel and Facebook page.