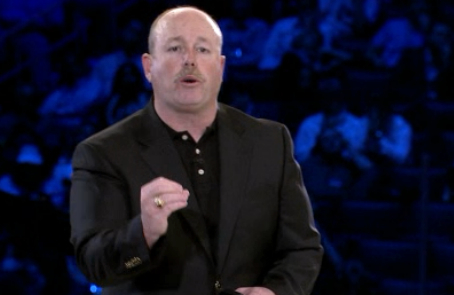 We’ve collected a few of the best quotes below, gleaned from the webcast and the transcript. Here’s an audio clip of selected highlights, as well.

Keep in mind that a major purpose of this conference is to energize Microsoft’s network of partners, and Turner’s rhetorical fuel of choice is hyperbole. But as a glimpse into Microsoft’s competitive mindset, it’s revealing — and also pretty entertaining, if taken with a huge grain of salt.

For example, Turner at one point showed this slide, citing Apple’s “ecosystem divide.” 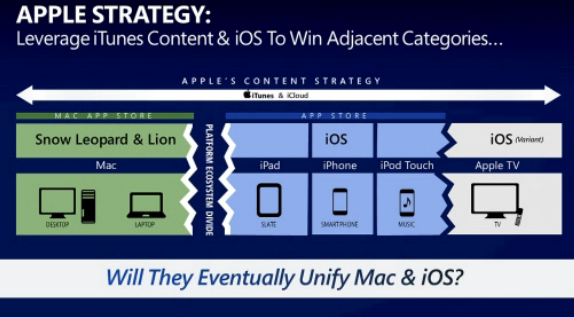 “When I talk about that Apple ecosystem, the ability to get one application to run across those five platforms is very difficult,” he said. “In the future of Microsoft using HTML5, IE9 and 10, the scalable OS, the ability to do that gets much, much easier. And so having that vision to take us to a unified ecosystem with consistently connected user experiences is really, really strategic for us.”

That may be where Microsoft is headed with the future release of Windows 8 and other products. But keep in mind that this is a company with a music device, Zune, with apps that aren’t compatible with its Windows Phone operating system.

Other comments by Turner on the company’s competition:

There was also some news that emerged from the event, with Turner saying that Microsoft plans to accelerate its retail expansion, opening as many as 75 more stores over the next two to three years.