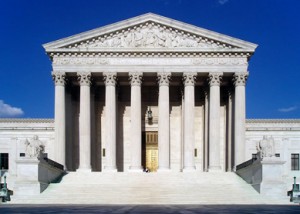 Microsoft and i4i L.P., a small Canadian tech company, will square off this morning in oral arguments before the U.S. Supreme Court — the climax in a 4-year-old patent-infringement battle between the companies.

At issue in the case is a $290 million verdict against Microsoft for violating i4i’s U.S. Patent No. 5,787,449 through the use of custom XML technologies in Microsoft Word. But the broader question — and the reason the case has generated so much outside interest — is whether to lower the standard that defendants in patent cases need to meet to prove patents invalid in court.

Under the current standard, the evidence to prove a patent invalid needs to be “clear and convincing.” Microsoft argues that the standard should be a “preponderance of the evidence” — the traditional requirement in civil cases, meaning more likely than not. At trial, the company failed in its effort to prove the i4i patent invalid under the “clear and convincing” standard.

Companies including Google, Zynga, Linkedin, Time Warner, Wal-Mart and others have gone on record with the U.S. Supreme Court supporting Microsoft’s position. General Electric, Procter & Gamble, 3M, Boston Scientific and many others support i4i in the case — including the U.S. government, representing the interests of the U.S. Patent and Trademark Office.

Loudon Owen, the chairman of i4i, said via phone last week that the “clear and convincing” standard is key to protecting the interests of inventors, a central element of the patent system. The limited period of exclusivity granted by patents “allows people to build companies, to commercialize, to compete,” he said, adding that the concept of changing that standard from when the patents were filed “completely disrupts that entire process.”

“This is akin to changing a standard for conviction in criminal law from beyond a reasonable doubt to, well, more or less, a flip of the coin, a feather lands on one side of the scale,” he said. “This is the same sort of very dramatic change in the existing law.”

Andy Culbert, associate general counsel at Microsoft, contends the lower standard for proving invalidity would actually improve the system by improving the quality of patents.

“I think it will have ramifications not only for Microsoft but for other companies in cases in which the assertions are being made by what I would call weak patents or patents that were questionable when they were issued,” he said via phone. “I think a lot of those cases are going to come out differently or be affected by this. A ruling in our favor will have a beneficial effect in helping us and others to weed out weak or bad patents. That will help to strengthen the system as a whole.”

Arguments begin shortly in Washington, D.C., and a decision is expected by the end of June.