There’s been considerable fanfare around the Kindle Fire tablet since Amazon announced it at the end of September, and it’s easy to understand why: finally, there may be a worthy competitor to the iPad. Though many tablets have tried to unseat the iPad in recent years, the Kindle Fire bears two important differences: it’s produced by a company with years of experience in making high-selling tablet-type devices, and it’s tied to an expansive content library with millions of existing customers.

The Kindle Fire (and tablet computing in general) has also been a popular topic in higher education, where digital content and devices are reshaping the way that teachers teach and students learn.

The case for why tablets are ready for the college classroom is pretty simple: they’re a great way for students to consume media-rich digital content (the best way out there, in my opinion), they mesh well with students’ lifestyles thanks to their small profile and long battery life, and tablets offer access to the world of apps, which includes some of the most innovative educational software around.

Like in most other markets, the iPad has so far been the tablet of choice on college campuses. But with today’s launch of the Kindle Fire, Apple may have its first viable competitor.  Will the Fire knock out the iPad and light up a second-stage tablet wave in education. Here’s one insider’s perspective. 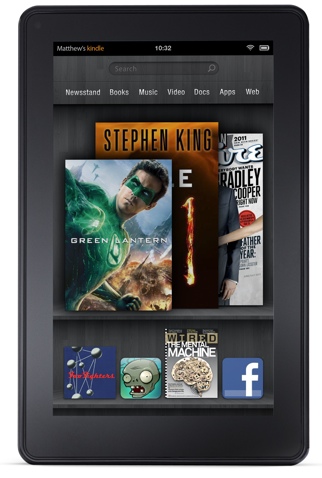 Of all the features of the Kindle Fire, the one that could allow Amazon to really cause a disruption in the higher education market is the price. At $199, the Kindle Fire is less than half the price of the base model iPad. This alone not only gives Amazon a shot at stealing potential customers away from Apple, it might allow it to create an entirely new market segment.

We all know how important price is to students and parents. I’ve long thought that tablets wouldn’t truly gain traction among college students until prices fell below $300. Now, with the Kindle Fire coming in at two-thirds of that price, students may finally have the low-cost alternative that they’ve been waiting for.

Or, more specifically, the screen size. In the world of higher education, companies like mine have been paying close attention to pilots of e-readers and tablets on campuses over the past few years. The one piece of feedback we’ve consistently heard from students who’ve participated in these pilots? They’re looking for larger screen sizes – 9.7” and above.

Will the Kindle Fire’s 7” screen – which is nearly 30% smaller than the iPad’s – be enough to satisfy students’ needs? Given that much of the digital content that students have access to today goes far beyond what most think of as an e-book – with multimedia elements such as images, video and audio built right in – I think the Kindle Fire’s smaller screen size will be a dealbreaker for many college students.

On the surface, giving college students a tablet with a seamless integration with Amazon’s vast library of digital content seems like a match made in heaven. After all, students buy most of their books through Amazon. Right?

The answer isn’t a simple yes or no. While many students undoubtedly purchase books – both print books and e-books – through Amazon, the growing popularity of online learning platforms is changing the way that college students access content by placing it in the midst of other critical course experiences, like doing homework.

These online learning platforms – accessible via any browser, including Amazon Silk – not only provide students with direct access to e-books, they use adaptive technology to analyze students’ knowledge and can recommend specific sections of content that students should brush up on to improve their skills. Data-driven personalized learning that helps both instructors and students become more efficient is the emerging future of education – bank on it.

One important fact about the Kindle Fire (and its new competitor, the Nook Tablet) that many are overlooking: its users won’t be able purchase apps directly through the Android Marketplace. Instead, they’ll be limited to the thousands of Android apps that are available through the Amazon Appstore. While this means that the Kindle Fire’s apps will likely have higher standards for stability and security, Kindle Fire users run the risk of missing out on new educational apps that can help them learn and study. If I were a student, that’s not a risk I’d be willing to take.

What about the other features?

So what’s the tale of the tape?  I think that the Fire measures up well against the iPad on portability and price, but ultimately its smaller screen size will keep it from igniting the higher education market.

In the post-fight matchup, it’s best not to get too caught up in the specs of the current device, as Amazon is already rumored to be working on a larger-screen version of the Kindle Fire. Once the Kindle Fire’s usability for education catches up with its attractive entry price, I think that the next (or next-next) version of the device stands a good chance of becoming the a must-carry device that changes higher education for the better.

Vineet Madan is Vice President of McGraw-Hill Higher Education eLabs, which works with colleges and universities, professors and students along with technology partners to develop tools to improve the way instructors teach and students learn.

Also see his past Mashable guest post, 6 Reasons Tablets Are Ready for the Classroom.