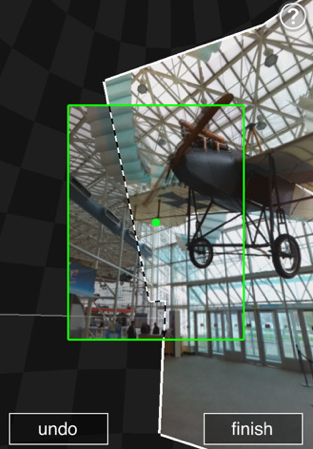 Microsoft has made plenty of apps for Apple’s iOS in the past, but lately it’s becoming almost prolific. Fresh off the release of its well-received Bing app for iPad, the Redmond company today is back with something new in the Apple App Store: Photosynth.

Microsoft’s Photosynth has been around for a while on the web, allowing people to stitch together collections of photos into interacactive three-dimensional scenes. It’s one of the company’s more noteworthy online technologies of recent years.

Mobile apps for viewing Photosynth panoramas have also been available in the past. But this is the first Photosynth app from Microsoft to let people make panoramas on the device. For now, it’s only on iOS, but versions are expected for other platforms in the future, presumably including Microsoft’s own Windows Phone.

At the same time, it’s another sign of pragmatism from Microsoft. Its online services team is implicitly acknowledging the importance of iOS as a software platform even as Microsoft’s Windows Phone team attempts to counter the iPhone’s momentum, and its Windows division grapples with the implications of the iPad.

In my initial testing of the Photosynth app on an iPhone today, the implementation seems solid. The app allows users to piece together images in real time by moving the phone to different angles and areas and tapping the screen to capture a particular viewpoint.

Afterward, the resulting panorama can be navigated by swiping the screen to move around the scene.

Photosynth also enables sharing to Facebook and Bing Maps from the app, and makes the panorama images available to the iPhone Camera Roll for access by other apps on the phone.

Microsoft says the Photosynth app was developed for the iPhone 4, iPhone 3Gs, and iPod Touch fourth generation. It was optimized for those handheld devices, but is also compatible with the iPad 2.

Other recent iOS apps from Microsoft include the OneNote note-taking application, which debuted first on Windows Phone. The company’s Bing search app for iPhone also has been getting frequent updates.

Todd Bishop of GeekWire can be found on Twitter and Facebook, when he’s not wasting time creating 3D scenes of his office.