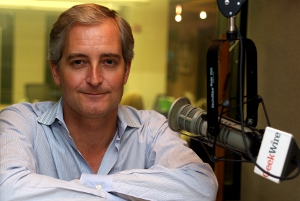 Our guest on this week’s GeekWire radio show and podcast is Ed Fries, the video-game guru and startup adviser who was the head of Microsoft’s games business during the development and rollout of the original Xbox and beyond.

In this extended version of the interview, he tells some great stories about how he got into the video-game business, what it was like to roll out the first Microsoft console, and what he’s up to today in the worlds of video games and startups.

And if you listen to the end, he tells an amazing story about Microsoft CEO Steve Ballmer and how Apple CEO Steve Jobs reacted to Microsoft’s acquisition of Bungie Studios, which was making games for the Mac before it went on to create the blockbuster Halo franchise for the Xbox consoles.

The interview with Fries starts about 11 minutes in, following our weekly news roundup, in which we discuss topics including the rollout of online dog-sitting startup Rover.com, a Bellevue theater’s controversial plan to allow texting and tweeting, and the kick-off of the holiday shopping season.

Listen to the show above or directly via this MP3 file.

Show Notes: Headlines and links for more info on the topics we discussed:

Name that Tech Tune: This week’s challenge, and the answer and winner from last week.

App of the Week: EyeJot