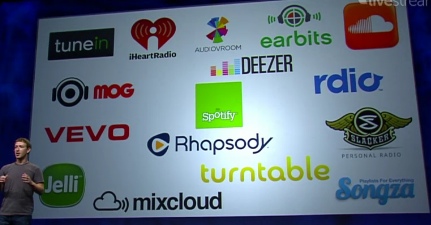 Rhapsody made a surprise appearance at Facebook’s f8 conference today, at least in the form of its logo on a slide shown by Mark Zuckerberg as he introduced the social network’s new Facebook Music platform for listening to tunes with friends.

Here’s how Rhapsody is involved: The Seattle-based music service will be offering a free 30-day trial to Facebook users, without requiring them to enter credit card information or automatically converting them to paid subscribers once the free period is up. It will through the Facebook Connect login service.

Facebook users will be able to access the free Rhapsody trial when friends who are using Rhapsody share what they’re listening to via “scrobbled” links. The 30-day trial will also include the ability to use Rhapsody on mobile devices. The Rhapsody service normally starts at $10/month.

At the same time, the Facebook Music launch also highlights the newly competitive landscape for Rhapsody. Appearing on stage with Zuckerberg today was Spotify CEO Daniel Ek, whose service recently launched in the U.S. and offers a free version that has proven particularly popular in Europe.

Rhapsody, which was spun off from Seattle-based RealNetworks last year, launched a series of new social features last week on its website.