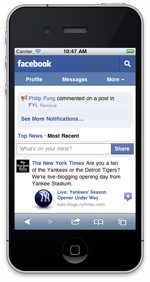 Seattle is Facebook’s first major remote engineering base outside its Palo Alto HQ, so it’s a test case for future outposts. So how’s it going? Less than a year in, the company says its Seattle engineers are emerging as key players in high-profile projects, while helping figure out what works (and what doesn’t) for remote collaboration among development teams.

Case in point: The social networking giant says its revamped and unified mobile site, unveiled last week, was boosted significantly by a small group of newly hired engineers in Seattle who had only recently completed Facebook’s “Bootcamp” for engineers.

Wayne Chang, an engineering manager who moved to Seattle from California as part of the new office, details the contributions in a Facebook post today. He predicts that the project — combining Facebook’s mobile and touch sites into one — “would have launched months later” without the new Seattle engineers.

“Within weeks of starting in Seattle, one new Mobile engineer, Herbert Duarte, had added privacy controls to the new site, as well as revamping the Events and Notes experiences.  Another, Tao Xie, rewrote the Notifications data model used and made the Notifications experience more visually pleasing on touch phones.  And yet another, Guangyu Chen, re-architected much of the Javascript core used for the project.”

The company is putting the message out as part of its broader recruiting efforts, competing with the likes of Google, Microsoft and Amazon for scarce engineers by highlighting the impact they can have on a platform that reaches more than 500 million people.

In an interview this morning, Chang said it helped in ramping up the Seattle office that Facebook’s engineering teams already use online collaboration tools and IRC (Internet Relay Chat) to communicate even in some cases when they’re sitting within earshot in the same office. Video-conferencing rooms have also helped.

One goal is to keep from pigeonholing the people in Seattle to any one specific team, and those tools mean that the remote engineers can work with basically any team at Facebook.

So what hasn’t worked? For one thing, the notion of an always-on Skype connection to link up the remote teams hasn’t caught on as much. The company also has a robot in Palo Alto, with a screen, that can be driven around for video-conferencing. As fun as that sounds, it can be distracting.

But overall, Chang said, the company’s approaches are succeeding in connecting Seattle and Palo Alto.

“We’re trying a lot of things,” he said. “Wherever the pain points are, we’re trying to figure out how we can bridge this gap.”