Valve Corp., the Bellevue-based video game company behind hit franchises like Half-Life and Portal, is a giant in the digital distribution of PC games. The company’s Steam distribution system, with more than 35 million users, is sometimes called the iTunes store of video games.

Valve is also a private company, in both the corporate and literal meanings of that word.

So it was more than a little illuminating to listen to Valve co-founder Gabe Newell give a spontaneous, 8-minute dissertation on the modern economics of video games at a recent conference in Seattle — explaining, in detail, how the company conducts behind-the-scenes pricing experiments to try to understand why we buy games when we do.

Newell cited some surprising sales data as he debunked a popular theory about game piracy, explained how the economic principle of price elasticity applies to video games (and how it doesn’t), and shared details on the company’s experience with “free to play” games such as Team Fortress 2, where the business model is based on the sale of virtual goods.

For your weekend reading, here’s an edited transcript from the WTIA TechNW panel. (Also see this follow up with Newell’s predictions about Apple and the future of the game console market.)

Gabe Newell: It’s interesting to touch on a number of pricing and service issues, because it will help convey the complexity of what we’re seeing in the entertainment space, and there’s probably also going to be lessons in it for other people trying to create value on the Internet.

One thing that we have learned is that piracy is not a pricing issue. It’s a service issue. The easiest way to stop piracy is not by putting antipiracy technology to work. It’s by giving those people a service that’s better than what they’re receiving from the pirates. For example, Russia. You say, oh, we’re going to enter Russia, people say, you’re doomed, they’ll pirate everything in Russia. Russia now outside of Germany is our largest continental European market.

Newell: That’s in dollars, yes. Whenever I talk about how much money we make it’s always dollar-denominated. All of our products are sold in local currency. But the point was, the people who are telling you that Russians pirate everything are the people who wait six months to localize their product into Russia. … So that, as far as we’re concerned, is asked and answered. It doesn’t take much in terms of providing a better service to make pirates a non-issue.

Now we did something where we decided to look at price elasticity. Without making announcements, we varied the price of one of our products. We have Steam so we can watch user behavior in real time. That gives us a useful tool for making experiments which you can’t really do through a lot of other distribution mechanisms. What we saw was that pricing was perfectly elastic. In other words, our gross revenue would remain constant. We thought, hooray, we understand this really well. There’s no way to use price to increase or decrease the size of your business. 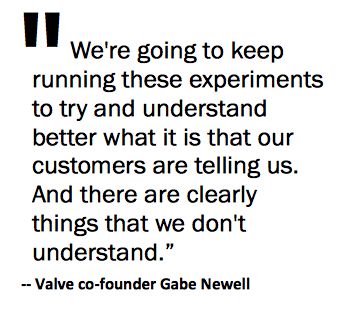 But then we did this different experiment where we did a sale. The sale is a highly promoted event that has ancillary media like comic books and movies associated with it. We do a 75 percent price reduction, our Counter-Strike experience tells us that our gross revenue would remain constant. Instead what we saw was our gross revenue increased by a factor of 40. Not 40 percent, but a factor of 40. Which is completely not predicted by our previous experience with silent price variation. …

Then we decided that all we were really doing was time-shifting revenue. We were moving sales forward from the future. Then when we analyzed that we saw two things that were very surprising. Promotions on the digital channel increased sales at retail at the same time, and increased sales after the sale was finished, which falsified the temporal shifting and channel cannibalization arguments. Essentially, your audience, the people who bought the game, were more effective than traditional promotional tools. So we tried a third-party product to see if we had some artificial home-field advantage. We saw the same pricing phenomenon. Twenty-five percent, 50 percent and 75 percent very reliably generate different increases in gross revenue.

The most recent thing that also is really puzzling is that we made products available for free on numerous occasions, without significantly impacting the audience size. We recently said, we’re now going to do something different, we’re not only going to signal that it’s free but we’re going to say, ‘it’s free to play,’ which is not really a pricing signal, even though that’s what you would ordinarily think it is. And our user base for our first product that we made free to play, Team Fortress 2, increased by a factor of five. That doesn’t make sense if you’re trying to think of it purely as a pricing phenomenon.

Why is free and free to play so different? Well then you have to start thinking about how value creation actually occurs, and what it is that people are valuing, and what the statement that something is free to play implies about the future value of the experience that they’re going to have. 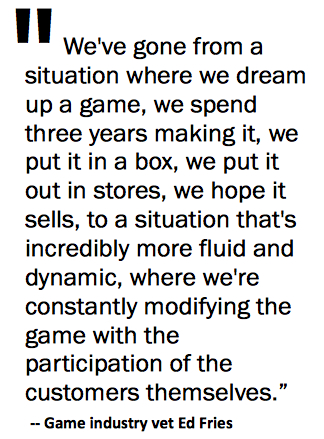 So that’s a fairly surprising and fairly recent statistic, which is that there seems to be something about the content that significantly changes how your monetization occurs, with apparently much broader participation than you would see out of something like FarmVille.

Fries: That’s some incredible data. … You talk about doing experiments. This is probably the biggest change that’s affected the gaming business over the last few years. It’s not just that we have digital distribution to our customers. It’s that we have this incredible two-way connection that we’ve never had before with our customers.

We’ve gone from a situation where we dream up a game, we spend three years making it, we put it in a box, we put it out in stores, we hope it sells, to a situation that’s incredibly more fluid and dynamic, where we’re constantly modifying the game with the participation of the customers themselves.”