If you want evidence of how single-purpose gadgets are converging on sleek tablet form, you need look no further than the lowly airline in-flight entertainment device.

Last week, Alaska Airlines announced its new digEplayer. I had the opportunity to use the new model on two five-hour flights between Los Angeles and Washington DC.

The digEplayer, when it was originally introduced in 2003, was revolutionary for in-flight entertainment. Until that point, airlines had to wire relatively heavy and expensive dedicated systems into aircraft seatbacks to provide movie (and sometimes other entertainment) choices to passengers. The first digEplayer, the model 5500 – developed by Alaska Airlines’ baggage handler Bill Boyer – had a roughly six-hour battery life, a boxy-thick early DVD player design, and was, marvelously, hand-held. If you had hands like the Hulk.

I was impressed enough to give it my Critic’s Pick as “Best Post-Bust Tech Startup” in Seattle Weekly’s Best of Seattle 2004, describing it as a “trade-paperback sized gadget … with a large hard disk, color LCD screen and built-in stand.” Yet the concept of a handheld digital video-on-demand device was still so foreign at the time that flight attendants took to describing it to passengers as a kind of DVD player.

Back then, the digEplayer 5500 was 2.4 pounds, held ten movies, three TV shows and several hours of music. And it cost $10 for a cross-country flight. 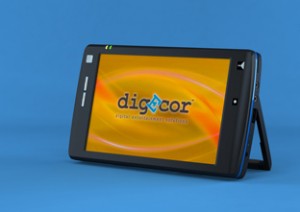 Eight years later, Alaska Airlines’ new digEplayer L7 is so light that parent company digEcor’s website doesn’t even list a weight, and on my flights last week it held 18 movies, 18 television shows, eleven sports programs (video and audio), 25 music videos, ten games, eight kids’ cartoons and a fully functional web browser with WiFi. Its battery life is 20 hours. And in an iPad-saturated world, flight attendants didn’t have to explain what it is.

So is it worth shelling out a similarly advanced price of $14 for a transcontinental flight?

The answer is a qualified yes. Both the current and original digEplayers have seven-inch screens (a model that Alaska used more recently, the XT,  had an eight-inch screen), but this digEplayer has a touch screen and a much smaller, well, handprint — that is, the device is both smaller and thinner than its predecessors. It also has, aside from the greatly expanded content and web browser, a great display and good sound (with two headset jacks for sharing). It also probably gets current movies faster than they’d be available on iTunes, Amazon or Netflix.

But there are a handful (sorry) of drawbacks. All content navigation uses the same, increasingly tired, “cover flow” metaphor — there is no “list” option to avoid having to flip through multiple screens to see all the choices. The touch controls are nice, but imprecise when doing fine tasks like adjusting volume with the on-screen slider. Inexplicably, audio-only music has completely disappeared from the entertainment selections.  Audio channels for classical, alternative or a half-dozen other genres are gone. The only music that remains is in the form of music videos.

For the music, all I can imagine is that someone at Alaska Airlines decided that everyone already owns an iPod or iPhone-like device, so including music was no longer necessary. But, if they do and they travel with their device, renting a digEplayer is likely also unnecessary. Recent models also play video.  Dropping music was a poor decision for those of us who travel with as few devices as possible, or prefer variety on long flights.

The other major digE-pointment is the web browser and service. While the browser itself works well,  there is an additional charge for Internet service from Gogo. On cross-country flights, that rivals the digEplayer rental fee. It seems Alaska or Gogo could at least promotionally bundle the first hour of web access with the digEplayer rental.  And the digEplayer’s virtual keyboard is oddly crippled. During a Gogo promo in which Twitter was free, I was surprised to neither find an apostrophe or hashtag, making my in-flight tweets both illiterate and isolated in the Twitterverse. (@digEplayer did respond to my childlike tweets that both keys are being added in a future software upgrade.)

The new digEplayer is worth the rental if you want a wide variety of video/web options and don’t already  travel with an iPad, laptop or other device that has both long battery life and lots of pre-loaded digital entertainment. Ultimately, the new digEplayer is a tablet computer, sporting many of its advances. But it’s also increasingly at risk of being made obsolete by the very technology it embraces.