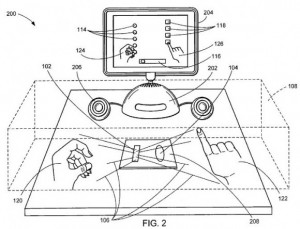 Microsoft may have some catching up to do with Apple in the area of speech interfaces and intelligent assistants on mobile devices, but the Redmond company’s Kinect sensor for Xbox 360 and Windows has put it ahead of Apple in natural user interfaces on the computer.

That’s one conclusion to draw from the Apple patent application that surfaced this week for a 3D imaging and display system that would track a user’s body as a means of controlling a computer, first reported by SlashGear. The patent application, filed just this August, describes something that sounds very similar to Kinect — describing the need for “uncomplicated, economical, yet highly effective 3D input devices for computers.”

These devices “need to be capable of operating by optically sensing object or human positions, orientations, and/or motions,” the Apple patent application says. “For reasons of cost as well as user convenience, they should be compact and capable of incorporation into a simple, small, single housing or unit. They also need to be versatile, and thus capable of working effectively and beneficially with the full range of conventional consumer appliances.”

Setting aside the question of who was first, the Apple patent application underscores the broader movement in the industry toward natural user interfaces –using gestures and speech, for example, as a supplement to the traditional keyboard and mouse.

There’s no indication yet that Apple plans to bring the system described in the patent application to market, but it would be a natural fit in the living room, as Microsoft demonstrates in the new Xbox Live update, which offers deeper integration of Kinect-powered voice and gesture controls.