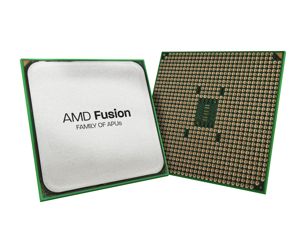 Chip-maker AMD will make a bid for a larger piece of the computer processor market at a conference in the Seattle region this week. The company is rolling out a new type of processor, promising that it will make notebook and desktop machines perform like supercomputers, with battery life as long as 10.5 hours.

AMD calls it an accelerated processing unit, or APU, and it’s part of a trend toward chips that combine CPUs and graphics processors on a single silicon die. The new AMD Fusion A-Series APUs (previously codenamed “Llano”) will be available in 150 notebook and desktop computers from PC makers including HP, Dell, Toshiba, Asus and Acer starting this week, the company says.

AMD is promising better battery life than from competing processors made by its rival Intel.

The company is launching the chips in conjunction with a conference it’s holding in Bellevue this week, the first-ever AMD Fusion Developer Summit. The intent is to get software developers taking advantage of the new characteristics of the A-Series chips. AMD says it chose the Seattle region to distinguish the conference from everyday events in Silicon Valley, and because of the presence of Microsoft, software developers and other industry partners in the region.

Technical details: The chip combines a DirectX 11 graphics processor on a single chip with a quad-core x86 CPU and a dedicated video processor, along with a new architecture that allows data to move faster between the CPU and the GPU components. It allows programs to take advantage of native parallel processing — churning through many pieces of data simultaneously — without sapping the machine’s battery to the extent that a traditional processor would.

“More and more we want a very big experience from our different types of computing devices, yet we want them increasingly mobile, with long battery life,” said John Taylor director of marketing for AMD’s PC and tablet products, and related software. The A-Series APUs are AMD’s answer to that paradox, explained Taylor in an interview with GeekWire.

Machines using the new chips will come with special stickers. No impact is expected on PC prices.

Battery life will depend on how the machine is being used, with the 10.5 hour benchmark coming with more “passive” uses. Still, as an example of high-intensity uses, AMD says the chips should allow machines to play two full high-definition movies on a single battery charge.

AMD is No. 2 in PC processors, with 18.9 percent market share in the first quarter, compared to more than 80 percent for Intel, according to the IDC research firm.