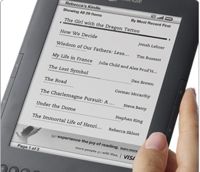 Amazon.com’s Kindle e-reader has struggled to make inroads on college campuses, as an alternative to traditional paper textbooks. Findings released this spring by the University of Washington found that fewer than 40 percent of students involved in a pilot program at the school stuck with the device for reading. Many of them found old-school paper books superior for navigation and notes.

But the Seattle company’s rollout yesterday of a new Kindle textbook rental service could give college e-book initiatives new traction, predict analysts from Baird Equity Research in a new report. Amazon’s reported plans to release a touch-screen Kindle and its own Android-based tablet also will play a role. The combination of those developments “position Amazon for significant gains in a fairly nascent market,” write the analysts, Colin Sebastian and Gregor Schauer.

“Given the significant weight of textbooks, as well as the limited useful life, e-textbooks offer significant advantages over their physical counterparts,” they write. “Given the high Kindle and tablet penetration rate, and the increasingly lower cost of devices, we think the device hurdles are rapidly diminishing.”

The analysts note that Amazon’s rental period of 30 to 360 days offers more flexibility than Barnes & Noble’s standard 60 to 130 days for e-textbooks. Amazon also appears to have better pricing for the rentals, based on their initial checks. However, they write, Barnes & Noble appears to have a greater selection of titles.

Core advances in e-reading technology also could help the Kindle improve its position at college campuses. For example, the pilot at the UW and other schools involved an older version of the Kindle DX, before the company rolled out digital note-taking improvements.

At the same time, Amazon isn’t giving up on the traditional paper textbook market, as evidenced by its dispute with college bookstores over its promotional claims about the terms of its college textbook sales and buyback program.