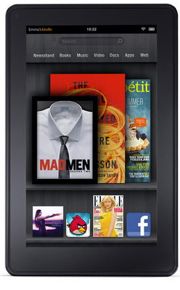 Amazon is infamous for declining to release specific sales figures for its Kindle devices, but that doesn’t keep the company from publicly marking its progress in a way that would make an algebra teacher proud.

The pattern continued this morning with the announcement that Kindle unit sales on Black Friday — including the new Kindle Fire tablet — were four times greater than whatever they were on Black Friday a year ago.

“Black Friday was the best ever for the Kindle family – customers purchased 4X as many Kindle devices as they did last Black Friday – and last year was a great year,” said Dave Limp, Amazon Kindle vice president, in a news release from the company this morning. “In addition, we’re seeing a lot of customers buying multiple Kindles – one for themselves and others as gifts – we expect this trend to continue on Cyber Monday and through the holiday shopping season.”

Another notable tidbit from the release: Target, which also carries Apple’s iPad, says Kindle Fire was its bestselling tablet on Black Friday.

The overall jump in sales is fueled by the addition of the $199 Kindle Fire and also price reductions that have taken the low end of the Kindle e-reader product line to $79.