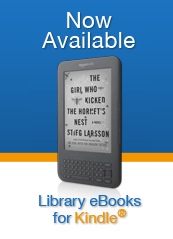 Amazon.com is has begun publicly testing its new Kindle e-book lending program at two major library systems in its home region, the Seattle Public Library and the King County Library System, in apparent preparation for a larger national rollout.

The news was reported earlier by Nate Hoffelder of The Digital Reader, after Seattle-area library users noticed the appearance of the Kindle download option on the sites of the two library systems.

As noted by Hoffelder, some MobileRead Forum users have reported success in downloading library e-books to their Kindles from the SPL and KCLS systems, but the system is labeled a beta test, and it isn’t working perfectly. I’ve tried a few times to download books tonight using my Seattle Public Library account and received error messages.

If you’ve had better luck, please let us know in the comments. We’d also like to hear from anyone who is seeing this at other libraries.

Here’s how the process works, as described in this Amazon FAQ …

Seattle Public Library is offering the ability to check out e-books for up to 21 days. Despite the fact that they’re electronic copies, a limited number of each title is available, based on usage licenses.

Amazon announced the Kindle Lending plan in April, saying that Kindle users will be able to check out books from 11,000 U.S. libraries.