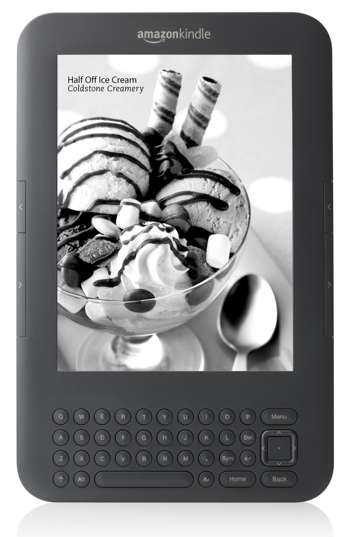 Would you like a deal on ice cream along with your daily read? That’s one of the questions Amazon.com’s Kindle will be asking its users as the company brings AmazonLocal to its popular e-reader — integrating the deals service into the discounted “Kindle with Special Offers” devices that the company launched earlier this year.

Amazon announced the plan this morning, saying the integration will start in New York City and expand into other AmazonLocal markets later this year .

Deals from the AmazonLocal service will appear on the Kindle screensaver, tailored to the user’s city.

Users will be able to purchase a deal directly on the Kindle, without re-entering their credit-card information. They’ll then then be able to show the voucher on the Kindle’s home screen when they go to a store, or they can print a copy of the voucher at www.local.amazon.com/purchases.

Kindle with Special Offers is an ad-supported version of the device, selling for $114 or $139 with 3G mobile wireless.

AmazonLocal launched earlier this year, working in partnership with LivingSocial, the daily deals company in which Amazon.com is an investor. AmazonLocal is now in 30 locations and 10 states, according to the company. Other major markets include Chicago, Los Angeles, San Francisco, Miami and Amazon’s hometown of Seattle.