I love my smartphone. But every now and then, I wonder if we need a break.

Don’t get me wrong. Me and my iPhone are nothing if not committed. For two years now I’ve joked that my right hand is 133 or 137 grams heavier than my left because my iPhone (3G then 4) is always in it. That’s not far from the truth.

To quick-draw sharers like me, a phone in the hand is worth two in the purse.

The day before my husband and I left for a week’s vacation to Washington D.C. and Puerto Rico this August, I asked fellow geeks for advice: Considering that 1) I’m addicted to checking email and posting on Twitter, Facebook, Google+, Instagram, Trover, Evernote, and umpteen other apps, and 2) I’d decided I had to be absolutely, 100-percent off the grid on the trip …. Should I leave my iPhone at home?

The conversation that followed drew out some truths about our relationships with the gadgets making their way deeper and deeper into our lives. It also helped convince me that smartphones and the people who really, really love them — including yours truly — need some time apart.

Here are four reasons why. 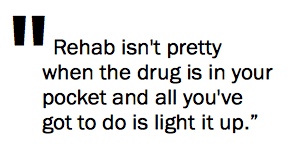 A few people suggested that I take my phone with me and just leave it off. “If you’re truly ‘off the grid,’ sharing won’t be a problem,” PR geek Eric Berto tweeted. That’s reasonable. But as my husband knows too well, it’s been a while since my particular mobile addiction responded to reason. It’s not reasonable to tweet while he’s asking me a question (“Sorry, what?”) or to make my phone an honorary utensil on foodie nights out. Try as I might, the most consistent digital discipline I’ve managed is to bar Web-roaming devices in the bedroom (only Kindle gets in).

Rehab isn’t pretty when the drug is in your pocket and all you’ve got to do is light it up. On my honeymoon, my phone stayed in my suitcase and stayed off. That did plenty, but not enough. Just looking at it quickened my pulse. What’s happening? What am I missing? What about this amazing vacation should I be writing/tweeting/Facebooking/emailing?

To my should-I-leave-it iPhone query, fellow GeekWire columnist Frank Catalano Facebooked a frank yes. “After 48 hours, the frothing will have ended and you’ll be able to breathe again,” he wrote. He was right. After the phone was out of my hands, it actually got off my mind.

A bar scene in the Steve Carrell flick “Crazy Stupid Love” (awesome, by the way) is the first time I’ve seen a big-screen mockery of the growing tendency among us young adults — not teens, mind you — to take a pause in conversation as a cue to shut up and lean into our smartphones as a group. I’ve been there. Heck, I’ve led the charge. I’ve felt guilty about it, sure, but if the people I’m with are cool with it, no big deal, right? Watching that scene made me wonder. Society knows. Society judges!

But should they? I’d have said no every day this year except for seven — the week I was on vacation and away from my phone. Something about putting distance between you and your devices makes you see all digital behaviors differently. After studying the surf one morning at the Caribe Hilton in San Juan, Puerto Rico, I walked among the hotel’s huddle of hammocks and noticed that more than half their occupants were tapping mobile screens. I didn’t like it. Illustrator Wendy Wahman Facebooked me about how she views people and their digital devices. She put it well:

I don’t have an iPhone, BB, iPad or anything (yet). I have no island upon which I huddle with my own private coconut. And I wait, watching the person watching their hands, to jump back in the water with me. 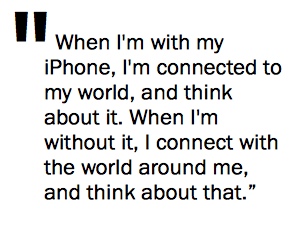 On our way to the airport, when my husband told his parents about my try at phone freedom (my digital dependency is well known in my family), I got pithy. “I don’t know,” I said from the back seat. “I guess I’ll have to look around at the world and interact with it or something.”

But really, I was hopeful. When I’m with my iPhone, I’m connected to my world, and think about it. When I’m without it, I connect with the world around me, and think about that. It’s weird to admit that the newborn digital world can get in the ancient physical world’s way, but our brains can’t tell the difference, and it does.

In the digital life, idle moments in the physical world are opportunities to dive into our digital ones. We’re never at rest by default, unless we actively, sometimes even painfully, choose to be. Maybe this is why when we talk of leaving our gadgets, we talk of freedom.

“I forget about my phone a whole lot these days – especially when I am with my kids,” entrepreneur Maya Bisineer wrote me on Facebook. “And I have worked hard to be able to do that. It is so freeing.”

People have all sorts of reasons for wanting to stay off the grid on their vacations. For some, like tech geek Mike Jensen, a big one is to disconnect from work. For me, it’s to remember that I don’t have to share things to enjoy them.

I’ll explain with a joke, my favorite by the late great comedian Mitch Hedberg:

Sometimes, in the middle of the night, I think of something that’s funny, then I go get a pen and I write it down. Or if the pen’s too far away, I have to convince myself that what I thought of ain’t funny.

If I experience something worth sharing beyond the reach of my voice, whether it’s through Twitter, Facebook, a blog post or email, I share it, and I love it. If it’s inconvenient to share it, I tell myself it wasn’t worth sharing. That it wasn’t as fun or as interesting as I thought. That I shouldn’t have enjoyed it as much as I did. 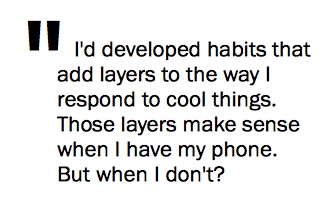 The absurdity of this line of thinking did not become clear to me until my iPhone-free trip, when it was not only inconvenient but impossible to post share-worthy experiences things in the all-important “now.” I was in the bathroom — yes, the bathroom — of the Raven Grill, a dive bar in D.C. I didn’t have to go, but I like my bathroom art, and my brother, a regular, told me the room was a sight. It was. Scrawlings everywhere. And color.

I framed the shot and wrote the tweet in my mind before I realized I couldn’t send it. Then it hit me: I’d developed habits that add layers to the way I respond to cool things. Those layers make sense when I have my phone. But when I don’t?

After that, enjoying my vacation got a little simpler.

“There will be other trips where you check the phone constantly,” social media geek Betsy Aoki advised me on Facebook. “Have one special one where you don’t.”

I did. And I will. At least one week a year. For my own good.