There is a common thread among the world’s “unicorns” (companies that have risen to a billion-dollar valuation in just a few years), which is that most unicorns operate primarily as Software-as-a-Service-based (SaaS) businesses.

This begs two questions: what has been learned by these highly successful companies, and what are the lessons for those that aspire to become unicorns themselves?

In 2018, EY conducted a survey of 200 executives with deep experience in SaaS-based operations. These are the decision-makers on SaaS — all respondents are ranked director or above, and approximately a quarter are from the C-suite. This is what we discovered.

Our survey executives were asked to reveal the one thing that, looking back, they would have done differently. Their foremost answer: they would have moved more quickly into SaaS (25%). At the same time, many wish that they had pivoted and innovated more quickly (13%). Another factor (10% of respondents) was to have accelerated their entry into the market with an acquisition. 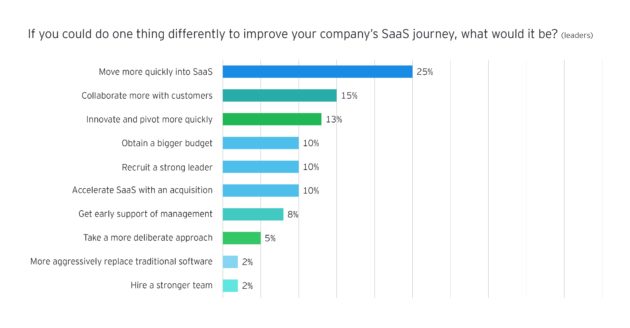 All of these priorities speak to a need for speed within the SaaS market. Many emerging industries have only just been opened by digital technologies — creating a land-rush dynamic for customers. In others, there is a race to establish the dominant technology standard for the industry.

The best management teams can often fail to predict how customer tastes will change or how competitors will react. The unexpected can be expected, but the special quality of SaaS is that it enables the company to pivot quickly. When asked to name their primary motivation behind developing a SaaS business, the most prominent reason was that “SaaS [products are] easier to design and develop,” followed by an “ability to quickly modify existing products.” 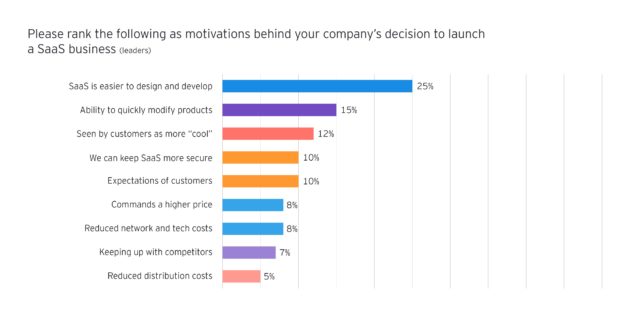 SaaS companies’ competitors are truly just a click away — a volatility that is accelerated by the power of online reviews and the velocity of social media in the digital world.

Leading SaaS companies know this because they pay close attention to the customer, from product design through to feedback analytics. When asked to rate the most important factor in their product development process, most respondents (55%) selected customer beta testing. 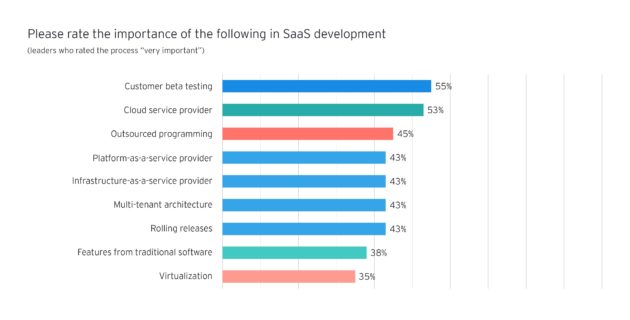 This attention to customers has paid off; leading companies are almost unanimous (98%) in reporting that SaaS has helped them to develop stronger relationships with their customer base.

An emerging series of Platform-as-a-Service (PaaS) providers is short-cutting the development process by providing out-of-the-box functionality. This outsourcing of development processes is a practice consistently followed by market leaders. 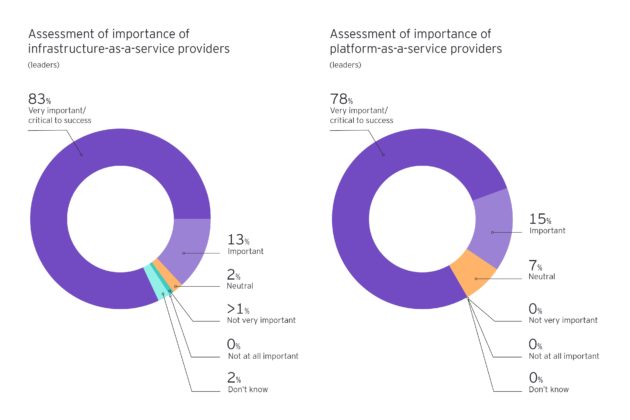 The results are striking. Eighty-three percent of the leaders rated Infrastructure-as-a-Service providers as very important or critical to success. In addition, 78% of SaaS leaders believe PaaS providers are critical or very important to reaching success.

Respondents noted how important SaaS was in lowering overall costs — 76% stated that it had a high impact or very high impact.

There is a long-standing debate on which architecture — cloud, on-premise or hybrid — best optimizes the balance between security and usability. It is not surprising that SaaS leaders are committed to cloud-based solutions (with 73% selecting cloud or hybrid cloud solutions), and believe they are the most secure option.

Indeed, more than two-thirds (68%) of respondents believe that a cloud-based solution like SaaS is more secure than on-premise software.

That is certainly what the customer thinks. We asked SaaS leaders what was most important to their customers in a SaaS solution. By a sizable margin, cybersecurity was top of mind. 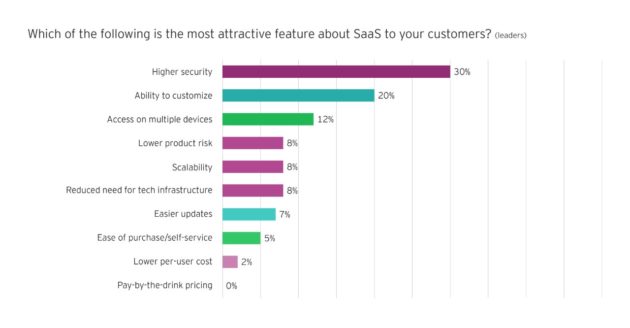 Given our survey findings, it is clearly no coincidence that such a high percentage of unicorns are built on SaaS platforms. They enable speed to market. They allow nimble organizations to navigate the unknowable. They disrupt customer relationships, lower costs and help keep the enterprise secure. SaaS models have been used to build some of the highest-performing companies today, and will undoubtedly be used to build the fabled unicorns of tomorrow.

The full version of this piece was originally published to ey.com and can be accessed here. For further perspectives on transitioning to SaaS, also see the EY-Parthenon report Crossing the chasm: Lessons learned in transitioning to a SaaS business model. The views reflected in this article are the views of the authors and do not necessarily reflect the views of the global EY organization or its member firms.