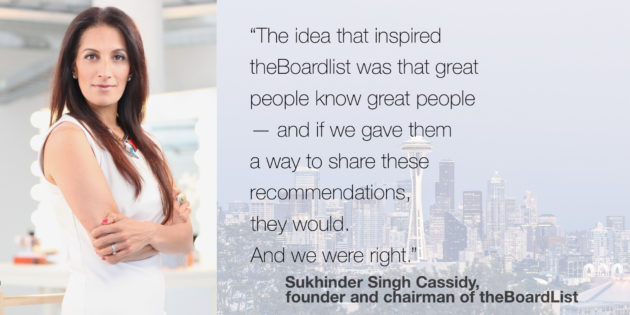 Great businesses that prioritize gender diversity in their leadership ranks are outperforming their gender-homogenous peers. A growing chorus of research, analysts and investors see the corollaries between resilience, innovation, earnings and other performance metrics among companies that embrace gender equity. Yet most women—particularly in tech—are mired in mid-level management.

Anyone with a leadership stake in our region’s growing technology sectors needs to act on the fact that introducing diversity of thought into your ranks makes for better decision making and execution, which leads to a more sustainable, better balanced workforce.

Bank of America has seen the benefits of promoting a culture of diversity and inclusion. Today, 55 percent of our workforce is female and women make up 40 percent of our global management team and over 30 percent of our board of directors. Recognizing this facet of our responsible growth strategy benefitted our shareholders and our clients, we’re looking to help our clients and the communities we serve benefit from what we’ve learned. That is why in 2017 we helped bring San Francisco-based theBoardlist to Seattle.

theBoardlist is a curated marketplace where CEOs and investors discover and connect with highly qualified, peer-endorsed women for their open board seats. Starting with the technology industry, theBoardlist is challenging boards of all stages, from early to public, to accelerate opportunities for better performance through creating diverse boards. The groups currently has 2,000 female candidates that are qualified, vetted and board ready.

I recently asked Sukhinder Singh Cassidy, founder and CEO of theBoardlist a few questions about how her team is helping tech companies embrace diversity and why it matters.

What inspired you to start theBoardList?
I was inspired to start theBoardlist out of my own personal frustration with the idea that there weren’t more women in the boardroom because there weren’t enough qualified women. As a long-time Silicon Valley CEO and public board member, I knew that wasn’t true — I personally knew dozens of highly qualified women who hadn’t been given a chance to sit on a board yet. And I knew that my peers all knew other women who were board-ready but still unknown. The idea that inspired theBoardlist was that great people know great people — and if we gave them a way to share these recommendations, they would. And we were right.

What is the #choosepossibility campaign and how did it shape theBoardlist?

In May 2015, 59 women in the technology community co-signed an open letter urging tech leaders to “#choosepossibility” by recognizing and mobilizing top female talent. That message received an overwhelmingly positive response, demonstrating a shared commitment to tangible action toward achieving gender diversity.

The #choosepossibility project channels momentum in our community toward differentiated, structured and scalable solutions that will help achieve better performance by harnessing the power of diverse talent. theBoardlist is the first stand-alone product to come out of the #choosepossibility project, but we have many other ideas for how to help further mobilize women in the workplace – both within and outside of the tech industry.

Why does theBoardlist focus specifically on tech companies?

When we launched in July 2015, our initial focus was on technology companies because the idea for theBoardlist grew out of frustration with a lack of representation of women in tech. There was (and still is) a strong desire for new, tangible solutions from and for the tech community — to help women leaders contribute at their highest potential.

As we continue to experience rapid growth and adoption in the United States and beyond, it’s become clear that there is great demand for theBoardlist among companies in all industries, not just tech. Our momentum continues to grow in industries and geographies outside of the tech scene.

Why do you think so few tech companies include women on their boards and what advantages do they gain by changing that?

Women remain underrepresented on corporate boards primarily because of two factors: (1) in public companies, because of the slow turnover of incumbent corporate board directors who are overwhelmingly male, and (2) in private companies, because board composition is typically limited to investors and CEOs/founders who are also overwhelmingly male. The other contributing factor in venture-backed companies is that they have many unfilled independent board seats; filling those seats would be the most straightforward way to bring more diversity onto those boards.

The most compelling reason for having gender diverse boards is that multiple studies have shown a correlation between gender diversity and business performance — e.g., gender diverse boards have shown greater return on sales, return on investment among other benefits. Secondarily, we believe women leaders on a company board help not only improve performance but also provide additional perspective in the boardroom in representing the voice of female consumers or employees, which is equally important.

What are some of the key changes that need to happen within tech organizations to create a more gender inclusive culture?

To create a more gender inclusive culture, companies should start with one simple change — build a diverse pipeline for each of its key roles. Often referred to as the Rooney Rule, seeing diverse talent as a rule, not an exception in recruiting processes has proven to be an effective way to jumpstart building an inclusive culture.

For companies who care about business performance and haven’t prioritized diversity as a key lever for driving growth, now is the time to commit to making a change — not because it’s a nice thing to do, but because it’s the smart thing to do.