The mind-bending technology — in which a single display shows different images to multiple people at the same time, tailoring the information to each person — will be tested in a real-world environment later this year when Delta Air Lines rolls out a beta experience at Detroit Metropolitan Airport.

The airline is partnering on the futuristic project with Misapplied Sciences, a Redmond, Wash.-based startup that developed the technology.

It might sound like science fiction. But GeekWire, along with thousands of attendees at CES this week in Las Vegas, had a chance to test out the experience. The installation lets travelers look at a digital screen and see only their personalized information, rather than a big list of all arriving and departing flights. No more scanning through tiny font to find your gate number and destination. 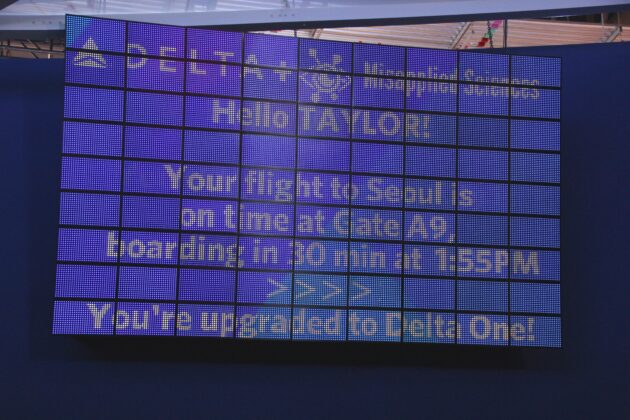 The airport scenario was one of the potential examples that Misapplied Sciences CEO and co-founder Albert Ng described when GeekWire first uncovered the stealthy startup in April 2018.

Delta’s in-house startup team found out about Misapplied and made an equity investment last year. The companies are working side-by-side on the airport project.

“When we met the Misapplied team, we were looking at ways to reduce stress in the airport environment,” explained Nicole Jones, Delta’s global innovation leader.

Delta had a huge presence at CES this year. It’s the first airline ever to rent a booth on the show floor. Attendees waited in long lines to try the “parallel reality experience,” marking the first time the technology was demonstrated in public.

“We knew that people need to see the technology to truly believe it,” Ng said. 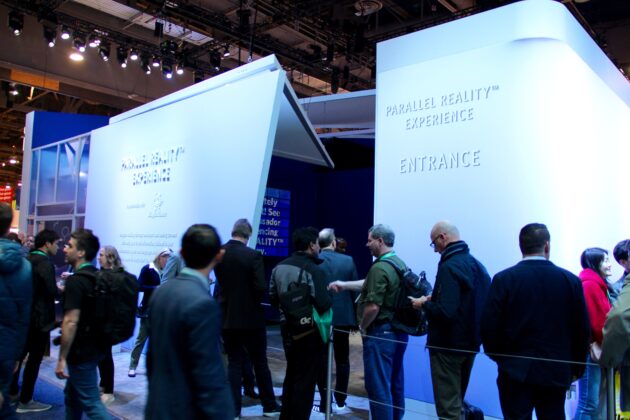 Ng took my group through two demos on Wednesday.

“Welcome to the international airport of the future,” he said, as we entered the experience.

The first was something I saw at Misapplied’s headquarters last year: An array of mirrors that shows how a single “parallel reality” display looks from many different vantage points. The images below are reflected from just one display, behind where I was standing while taking this photograph. 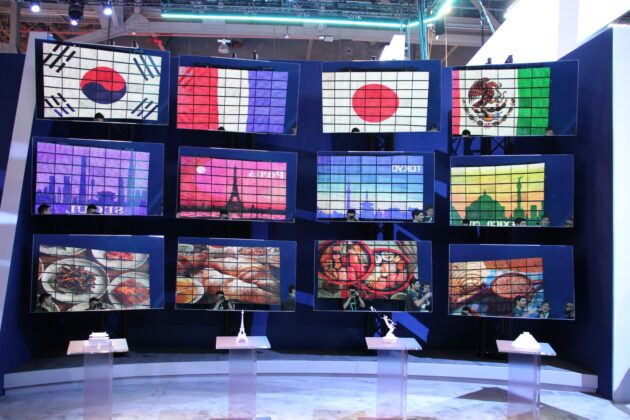 The underlying technology is powered by a new type of display, enabled by a “multi-view” pixel. Unlike traditional pixels, each of which emit one color of light in all directions, Misapplied says its pixel can send different colors of light in tens of thousands or even millions of directions. They call it a “magic pixel.”

The next demo showed what Delta travelers in Detroit can expect later this year.

Each guest scanned a personal boarding pass — Las Vegas to Seoul was our faux trip — before stepping into the room. That enabled an overhead camera to track our location in space as an anonymous blob, and display a personalized image on the screen. Ng said in the future that smartphones, facial recognition tech, or wearable devices could be used for tracking individual travelers.

The demo went through a few examples of messages, such as personalized gate and departure information, or a baggage claim carousel number, with the ability to switch to the viewer’s preferred language. 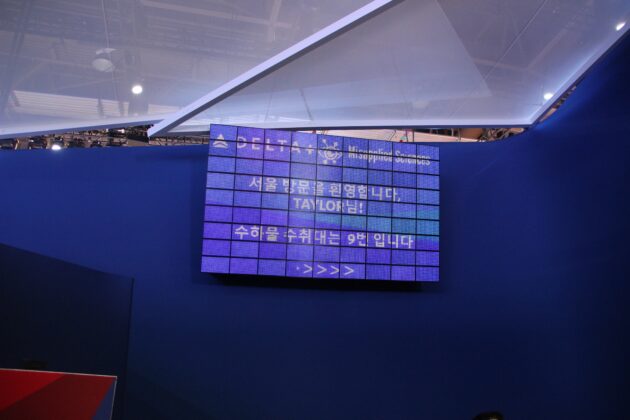 It all worked as described. I was impressed to see everything out of the lab and in use by an actual company. There’s a “wow” factor to the technology, but the real world implementation seemed a ways off when we demoed it in 2018.

Delta, which showed off other innovations at CES such as its mobile app and an exoskeleton designed to boost employees’ physical capabilities, is bullish about the potential of parallel reality. It spotlighted Misapplied during the company’s CES keynote speech, where Ng joined Delta CEO Ed Bastian and Jones on stage.

“This is a great combination of how we’re combining Delta’s strength and scale with innovative startups to advance the future of travel,” he added.

The privacy implications of parallel reality could be significant. Jones said the pilot in Detroit will be opt-in. The company is still finalizing details of how exactly travelers will be tracked. “All of the information will be protected and secure in Delta systems,” Jones told GeekWire.

Misapplied is aiming to get its technology not only in airports but stadiums, theme parks, retail stores, and more. “We would like to see parallel reality in all sorts of public venues,” Ng said.

The startup was founded in 2014 by Ng; former Microsoft Research leader Paul Dietz; and Dave Thompson, who previously worked at Walt Disney Imagineering.

Dietz, who is widely recognized in engineering circles for his early work on multi-touch screen technology, ran the company as CEO until March 2018. He was CTO and chairman when he stepped down in June 2019. Dietz is now a technical fellow at Tactual Labs, and Ng said he left the company to pursue other interests. We’ve reached out to Dietz for comment about his departure. Update: Dietz declined to comment.

Ng is a Stanford University and Caltech alum recognized for his work in areas including low-latency touchscreens. He was a research intern at Microsoft Research during Dietz’s tenure at the company.

Misapplied has raised $11.4 million to date, in addition to $1.5 million in grants from the National Science Foundation. In addition to Delta, investors include Carl Ledbetter of Pelion Venture Partners and Ginger Alford, an expert in computer graphics.

Other companies are also working on different ways to show personalized information to people using a single display. MirraViz, for example, is another startup that uses projectors to display different content to multiple people on the same screen.

The company has a distributed team across the U.S. It won Innovation of the Year at the GeekWire Awards in 2018.