It’s another busy day for Dan Lewis. He’s just come out of a big meeting with one of the top 10 shippers in the world. “Want a sandwich?” asks the 38-year-old CEO as he grabs one himself and dips into an adjacent room overlooking Puget Sound and the Space Needle.

There’s a laminated piece of paper on the table with a list of the company’s values. As Lewis begins talking about Convoy’s latest funding round announced Wednesday — a $400 million cash infusion raised at a $2.7 billion valuation — he points at one in particular: Earn it through results.

The proof is in the pudding, as they say. The results are there and we’re leaning into the business model.

“The proof is in the pudding, as they say,” Lewis said. “The results are there and we’re leaning into the business model.”

Investors are bullish about Convoy’s digital platform that facilitates transactions between trucking companies and shippers, despite some headwind in the form of a recent “trucking recession” and fierce competition from Uber Freight, which is doubling down on its own on-demand marketplace. Convoy, Uber, and other startups are aiming to disrupt a $800 billion U.S. trucking industry.

It’s the largest funding round for a Pacific Northwest company in more than a decade and comes on the heels of Convoy’s $185 million Series C round in September 2018 that valued the company at more than $1 billion.

The company has doubled its headcount over the past year to more than 800 people and recruited top talent from other tech giants in the Seattle area. It also has a growing office in Atlanta. 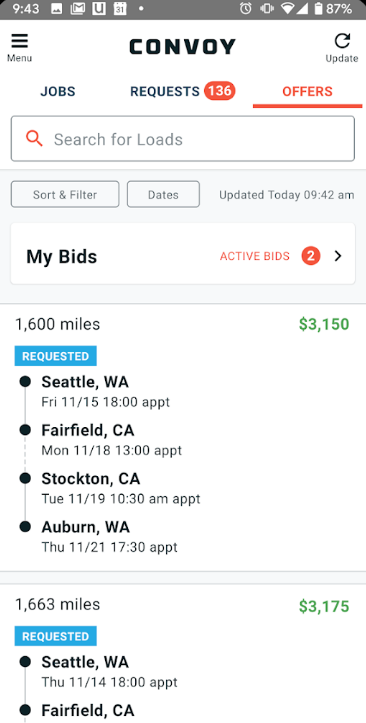 Convoy is helping move tens of thousands of truckload shipments per week across the U.S. and has doubled its volume in the past year, Lewis said. There are several hundred shippers using Convoy, about 50 of which are Fortune 500 companies such as Anheuser-Busch, Procter & Gamble, Wayfair, Land O’ Lakes, and Unilever. Its primary verticals are consumer-packaged goods; food and beverage; manufacturing and machinery; and retail/wholesale. The startup makes money by keeping a percentage of each transaction.

Lewis declined to reveal financial metrics. Silpa Paul, who leads the global commercial vehicle research and consulting team at Frost & Sullivan, estimates that Convoy brought in $300 million last year and expects the company to have “double-digit if not triple-digit growth” in 2019.

“I don’t just expect them to succeed — the stats say, they are succeeding,” Paul told GeekWire.

Truck drivers download Convoy’s free app to find work without going through brokers who typically use emails and phone calls. The company has rolled out various new features over the past year, including Convoy Go, a “drop and hook” marketplace that lets any carrier haul pre-loaded trailers; Automated Reloads, which uses machine learning to group full-truckload shipments for carriers and is helping reduce “empty mile” carbon emissions; Instant Bidding, which lets carriers bid on loads; and Convoy Connect, a transportation management system.

Convoy believes it can increase earnings for truck drivers while simultaneously reducing cost for shippers by removing inefficiencies in the existing supply chain, as seen in the flywheel below. 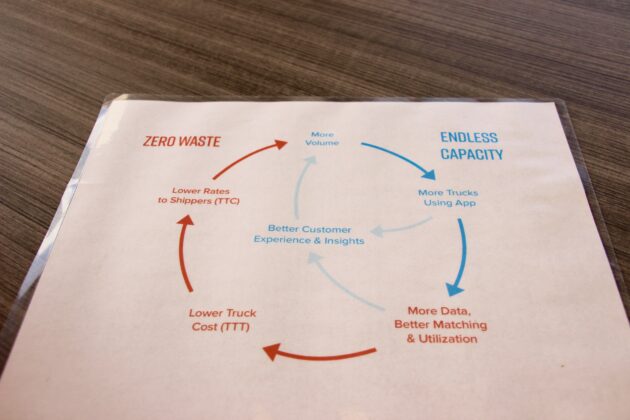 It’s a tall order, especially given what is happening to the U.S. trucking industry. Truck rates have come down significantly over the past year largely due to a capacity imbalance. Freighters invested in new equipment after a strong 2018 but are now dealing with a cooling market. Drivers are getting paid less and more than 600 carriers went out of business in the first half of 2019, up from 175 in the same period last year, The Wall Street Journal reported.

“In order to succeed in smart app-based logistics, network liquidity is going to be crucial, just as financial markets function much more effectively with more buyers and sellers,” said Tim Denoyer, a transportation analyst with ACT Research.

Ira Lawrence was a frequent Convoy user while operating his own trucking business north of Seattle. But after GeekWire interviewed Lawrence last year, the former Royal Canadian Navy member had to shut down Lawrence Express Lines, citing high insurance costs and an industry that “took a huge dive this year.”

Lawrence said he saw a run from Seattle across the state to Spokane go from $1,200 to $900 in a matter of a few months.

But he had nothing bad to say about Convoy. “I’ve never heard of anyone having a hard time with Convoy,” he said this week.

Some of the reviews left by drivers on Convoy’s app criticize the company’s low rates. But that’s more of an industry issue versus something specific to Convoy or an individual broker, said Paul.

“I don’t think these digital brokerage platforms are going to have a significant negative impact on rates,” she said. “Rates will ultimately always be determined by demand and supply balance.”

Lewis said rates are variable depending on location and capacity of a freighter — and that Convoy’s technology can help carriers reduce cost by driving fewer “empty” miles, spend less time waiting to get loaded and unloaded, and have more convenient appointment times.

“Our focus is on giving truck drivers more efficient runs so they can make more money overall,” Lewis said. “That’s how we run our business.”

Convoy will use the funding to accelerate hiring, particularly in engineering and for sales across its key markets “to build more density of freight and realize efficiency gains,” Lewis said.

While the company is not yet profitable, it’s a goal.

“We think that’s very important for our business,” Lewis said. “There’s a very clear path to doing that in trucking.”

There are a bevy of similar companies aiming to take market share of a digital freight brokerage industry that could reach $54.2 billion by 2025, according to Frost & Sullivan. The group includes Uber, which announced in September that it will invest $200 million annually in Uber Freight and hire thousands at a new Uber Freight headquarters in Chicago. Uber listed Convoy as a competitor in its IPO prospectus earlier this year.

Since May 2017, Uber Freight has contracted with more than 50,000 carriers and served more than 1,000 shippers. In its latest quarterly report, Uber said revenue from Uber Freight came in at $218 million for the three months ending Sept. 30, up 78 percent year-over-year as freight load volume doubled. Though the segment also took a $81 million loss, more than double from last year.

Generation’s investment in Convoy is grounded in many years of research into the future of logistics.

How will Convoy beat Uber and other startups including Transfix and Cargomatic? Lewis cited another company value: love problems not solutions.

“The problems are evergreen. They’re going to be there forever,” he said. “We can throw out some of the existing solutions or rebuild them. We have that cultural mindset from an innovation perspective. I know that’s differentiated us.”

Traditional truck brokerages — there are 15,000, Lewis noted — are also making digital investments and rolling out their own tech. Companies such as Convoy are now firmly on their radar, the CEO said.

“For the traditional folks, it was very easy for them to say, ‘yeah, what Convoy does is interesting, but it’s really only relevant for a couple of niche scenarios,’ or, ‘yeah, they do good work, but the shippers they work with are really only giving them the freight that nobody else wants.'”

“That was the story two years ago,” said Lewis, who started Convoy with CTO Grant Goodale after they left Amazon in 2015. “Now it’s demonstrably not that.”

There’s a lot of Amazon DNA in Convoy, from the cultural principals to focusing on the customer. In fact, Lewis asked Bezos for help when creating the company values.

And it’s Amazon that is largely responsible for changing consumer buying behavior and elevating the importance of supply chains as a result.

“We think this is an area where we can have incredible impact on society because the supply chain is so big and so inefficient and there isn’t an optimal supply chain solution that’s available to anyone,” Lewis said.

I had fun talking to Convoy CEO @daniellewis. His answer to Convoy's biggest challenges is a good lesson for other company leaders.https://t.co/3pIxJPAzEz pic.twitter.com/km0PyIqIRn

Lewis and Goodale have come a long way from hanging out at truck stops and getting kicked out of warehouses as they did market research when Convoy was just a kernel of an idea.

“Generation’s investment in Convoy is grounded in many years of research into the future of logistics,” Joy Tuffield, partner at Generation Investment Management, said in a statement. “Through its use of data science, Convoy is driving the next evolution in efficiency across the industry. This is an exceptional opportunity to achieve a reduction in carbon emissions, while simultaneously increasing earnings for truck drivers and increasing service quality for shippers.”

Generation also led a massive round for fellow Seattle startup Remitly this past July. Both Remitly and Convoy are ranked among the top 10 on the GeekWire 200, our ranking of top Pacific Northwest startups.