The Geared Up Giveaway is back! See the bottom of this post for a chance to win an Xbox Adaptive Controller.

It was a big week for smartphone news, but perhaps the biggest news this week was an unprecedented leak from Apple. Two official photos, one of the upcoming iPhone XS models and one of the upcoming Apple Watch Series 4, leaked before the products have even officially been announced.

This is the first time official photos of Apple devices have leaked before their launch. The photos confirm many of the rumors swirling around the much-anticipated new devices. 9to5Mac, which got its hands on the photos, also said it has confirmed the name of the upcoming iPhone XS and the fact that the phone will come in two sizes with similar form factors to the iPhone X. 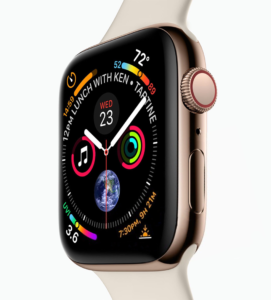 That’s on top of new leaks about the Google Pixel 3 XL. Apparently, the phones (which have not yet been announced) have become so common one was even left in the back of a Lyft. The news that Samsung is working on a smartphone with a folding screen puts the cherry on top of a crazy week of smartphone news. We round it all up on this episode.

Plus, we go hands-on (or hands-free) with the Xbox Adaptive Controller. The device is designed to be extremely customizable, particularly for people with disabilities. It comes with a huge array of ports and design features built with accessibility in mind, but also opens the door for some creative experimentation for any gamer.

Finally, we take you into the crazy world of PAX, the giant gaming expo that just wrapped up. Despite being a gaming convention for gamers, this year’s show felt quite a bit different — and sometimes less fun — than previous years.

Listen to this episode in the player below or subscribe to Geared Up in your favorite podcast app to listen on the go.