Amazon was approved for 2,515 visas for foreign-born workers in fiscal year 2017, outpaced by only one other company in the highly competitive H-1B lottery. That’s a 78 percent increase over fiscal year 2016, according data from U.S. Citizenship and Immigration Services compiled in a new study by the National Foundation for American Policy. The massive jump tracks with Amazon’s growth in the U.S. and its increased spending on research and development.

But Amazon isn’t the only tech giant that’s winning more H-1B visas than years past. Microsoft, Intel, IBM, and Google were in the top 10 companies approved for the most H-1B visas in fiscal year 2017.

By contrast, the Indian IT firms that are frequently criticized for flooding the H-1B lottery, are seeing a decline in the number of visas approved over the past few years. The top seven of those companies received just 8,468 visas in fiscal year 2017, a steep 43 percent decline since fiscal year 2015.

NFAP compiled the report to support its claim that the 85,000 annual cap on H-1B visas is too small to meet the needs of the U.S. economy. NFAP says the decline in H-1B visas awarded to IT companies is a result of industry trends: teams in cloud computing and artificial intelligence require fewer workers and U.S. employers are focusing on building out their domestic workforces over recruiting international talent.

But Lola Zakharova, a Seattle immigration attorney who works with large corporate clients, said the shift is driven by federal policy. She attributes it to a law signed in 2015 that requires employers that have more than 50 percent of their employees working in the U.S. on an H-1B visa to pay an additional fee of $4,000 for certain H-1B petitions.

“The price tag will be even higher if the employer has to respond to a request for additional evidence from the USCIS, which became a new normal,” she said.

Zakharova also believes that immigration policies from President Donald Trump’s administration discourage Indian IT firms from applying for U.S. work visas. In February, UCSIS announced it would review contracts and documents from IT staffing firms seeking to place workers with third parties under H-1B visas. The decrease in the number of H-1B visas awarded in 2017 suggests the administration’s efforts to crack down on Indian “outsourcing” firms are working.

“This trend pre-dates the Trump Administration, which is still awarding H-1Bs by lottery (for now),” he said in an email. “This suggests that fundamental demand for H-1B visas is increasing for U.S. tech companies, and decreasing for Indian outsourcing firms.” 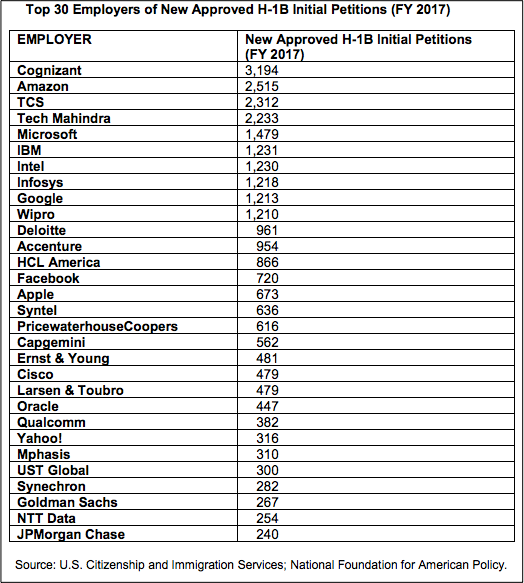 Other key stats from the report:

The NFAP report was first spotted by Axios.