EVERETT, Wash. – The idea behind the Flying Heritage Collection’s groundbreaking new exhibit about the causes and effects of conflict, “Why War,” was born five years ago – and the man behind the idea is none other than Microsoft co-founder Paul Allen, who owns the collection.

The Flying Heritage Collection shows off scores of historic aircraft and other military artifacts in a 57,000-square-foot hangar complex next to Everett’s Paine Field, including a German V-2 rocket, a Soviet Scud missile system and a couple of tanks.

Hunt recalled that Allen raised a big-picture question during a conversation about the collection and its future: “At some level, don’t we just have a lot of weapons on display? … We should do something to provide some context.”

That set off years of thinking and designing, aimed at putting together an interactive exhibit to explain why conflicts arise, how warfare has changed, and how war affects societies. Hunt says the resulting 2,500-square-foot exhibit, which opens to the public on Saturday, is the only one of its kind in the U.S.

The centerpiece of “Why War” is a wall covered with huge touchscreens that let museumgoers tap and swipe their way through American conflicts ranging from the Revolutionary War to the first Persian Gulf War.

The exhibit’s answers to the question raised by its title are based on social science research laid out by Greg Cashman, a political science professor emeritus at Salisbury University in Maryland. But the experience is nothing like a history class: Videos, images, maps, mini-bios and interactive graphics tell the stories of war in ways that will grab millennials as well as military veterans.

You can play with computer simulations that set up fictional scenarios – for example, a secession threat by America’s oil-producing states – and then let you choose strategies to address the conflicts. During a walkthrough, Hunt negotiated his way through that make-believe crisis with a mediator’s skill.

“The Union is saved,” he said. (But just in case you go down in flames, there’s a big red panic button you can press to reset the scenario.)

Yet another roomful of touchscreens lets you trace the history of warfare from the perspective of women and children, as well as soldiers and the key figures in conflicts. Historic pro-  and anti-war posters cover one wall. “This is the humanizing room,” Hunt said.

The exhibit, designed with the help of Seattle’s Belle & Wissell Co., includes a few offbeat artifacts from the history of warfare – ranging from a Civil War amputation kit to the booby-trapped rats and pigeon parachutes devised by the Brits to confound Nazis during World War II.

“The rats didn’t work,” Hunt said, but the parachutes proved to be an effective way to deliver homing pigeons to the French Resistance. 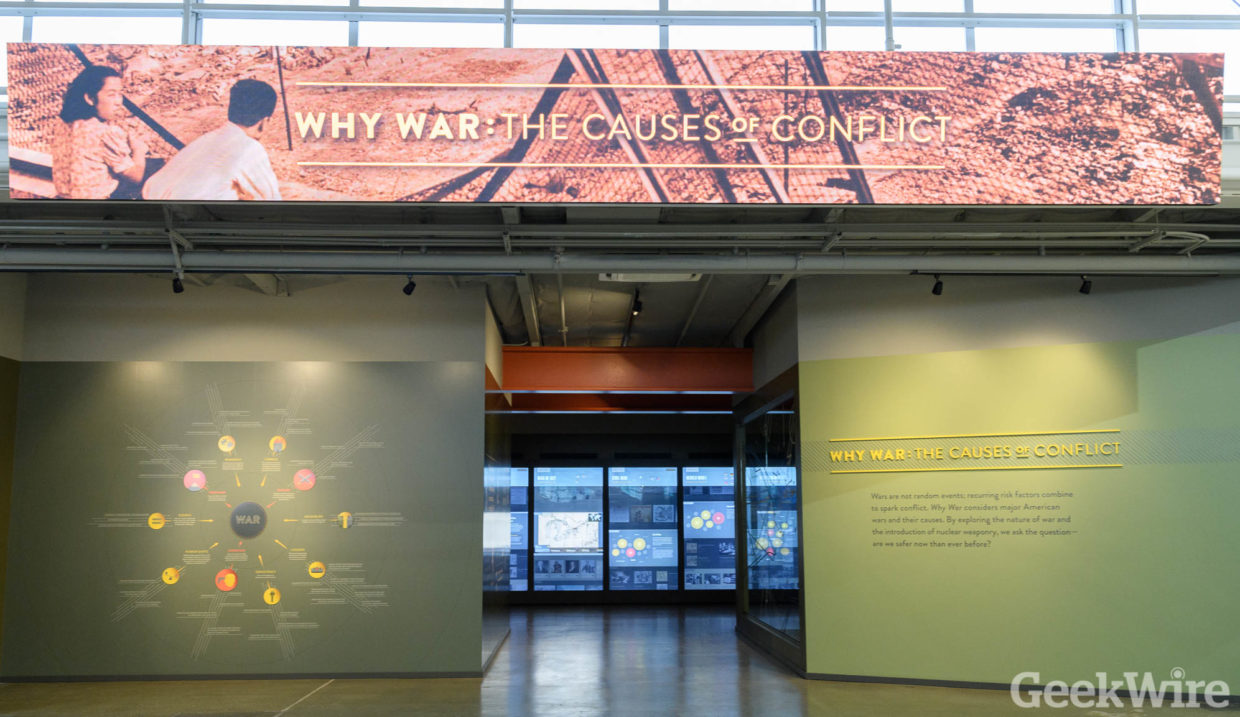 “Why War: The Causes of Conflict” is a new exhibit housed in a 2,500-square-foot space at the Flying Heritage Collection in Everett, Wash. (GeekWire Photo / Kevin Lisota) 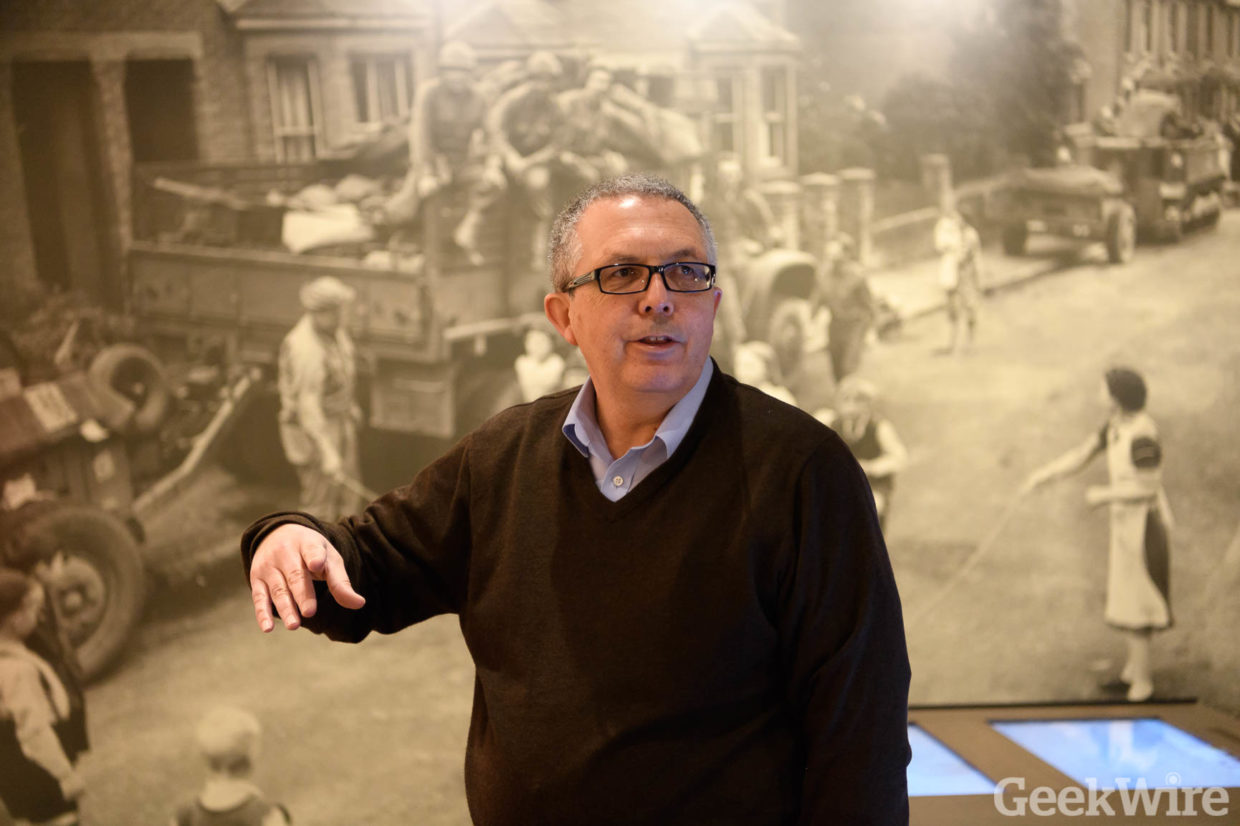 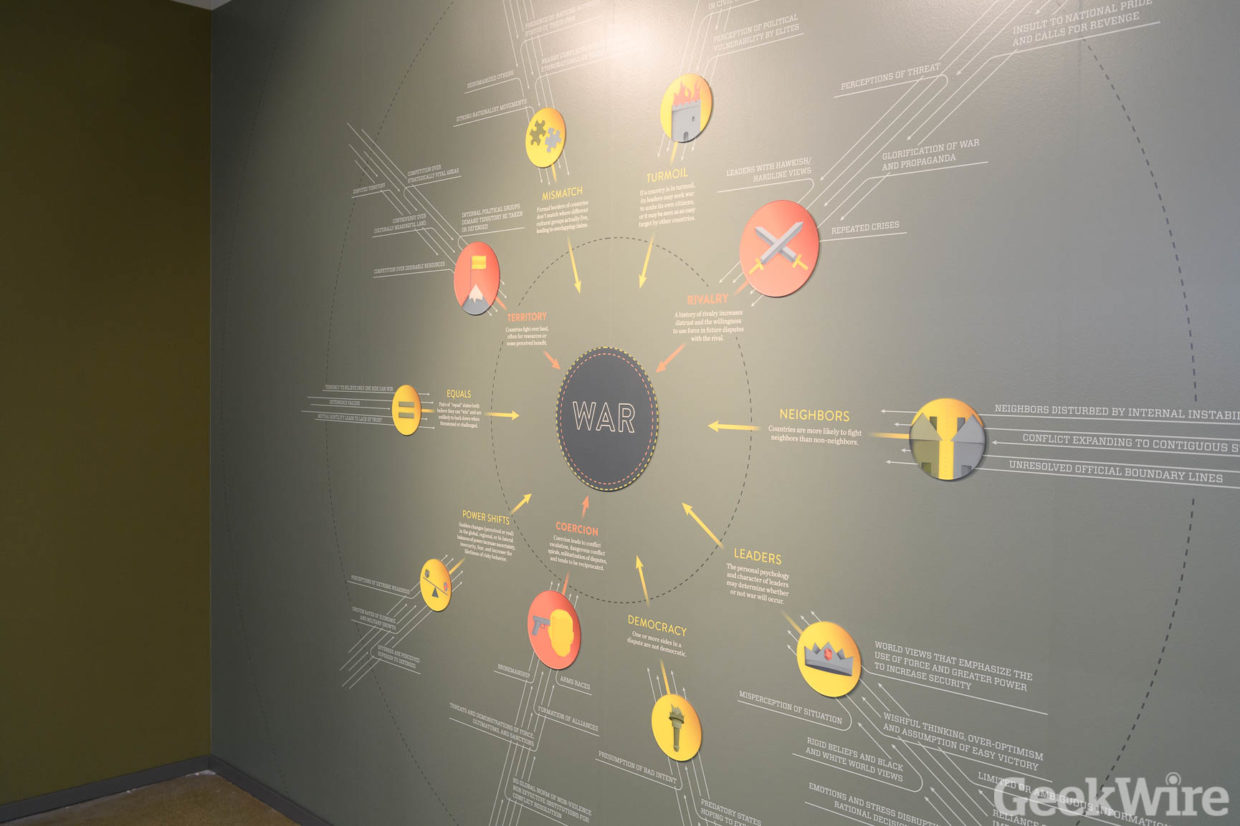 A graphic display details the factors that contribute to conflict, based on research by Salisbury University’s Greg Cashman. (GeekWire Photo / Kevin Lisota) 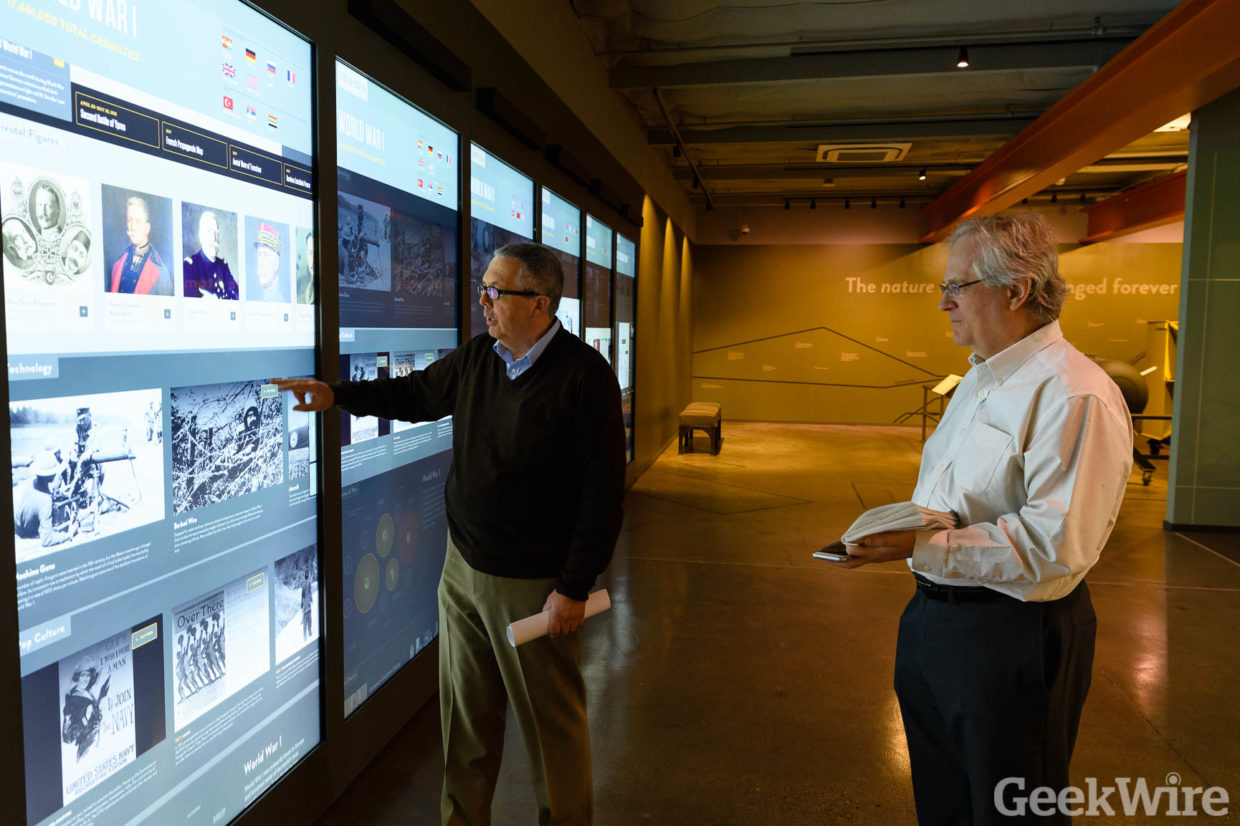 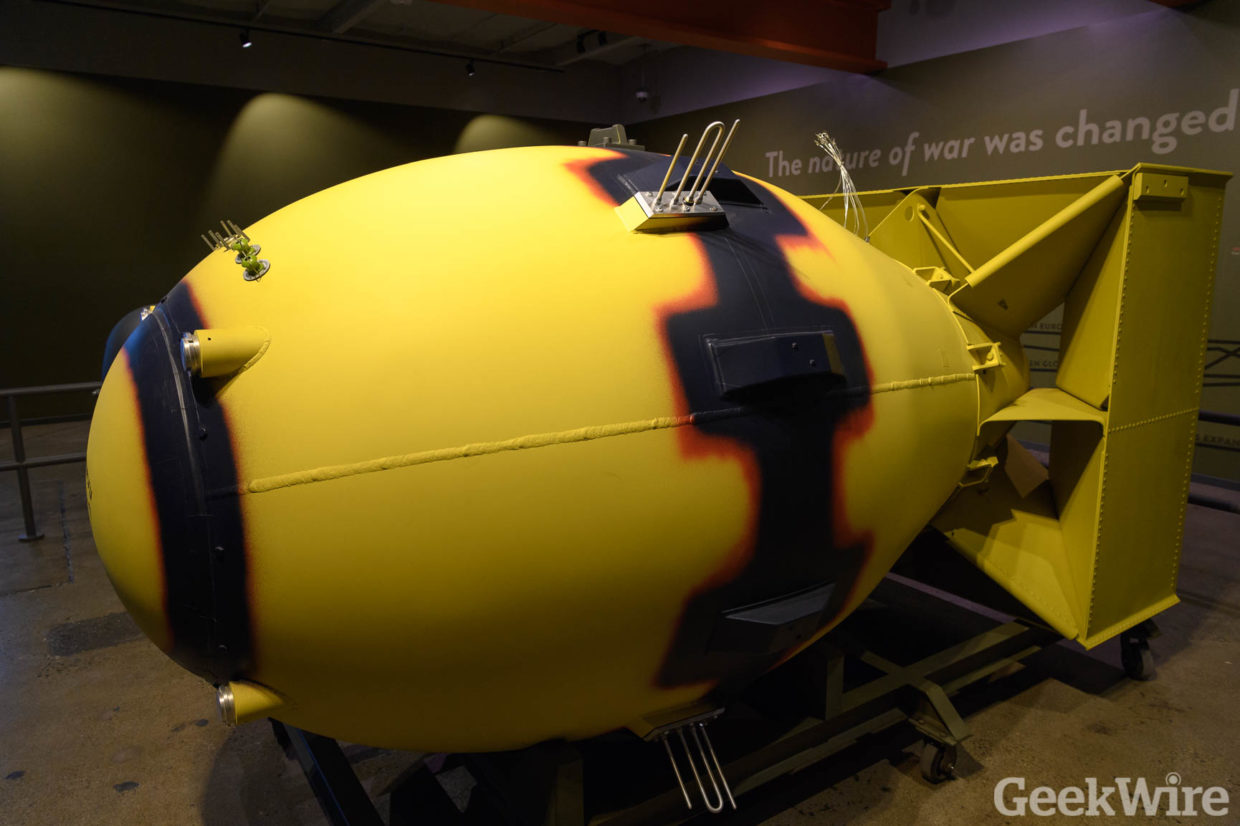 “Why War” features a replica of Fat Boy, the nuclear weapon that was detonated over the Japanese city of Nagasaki in 1945. (GeekWire Photo / Kevin Lisota) 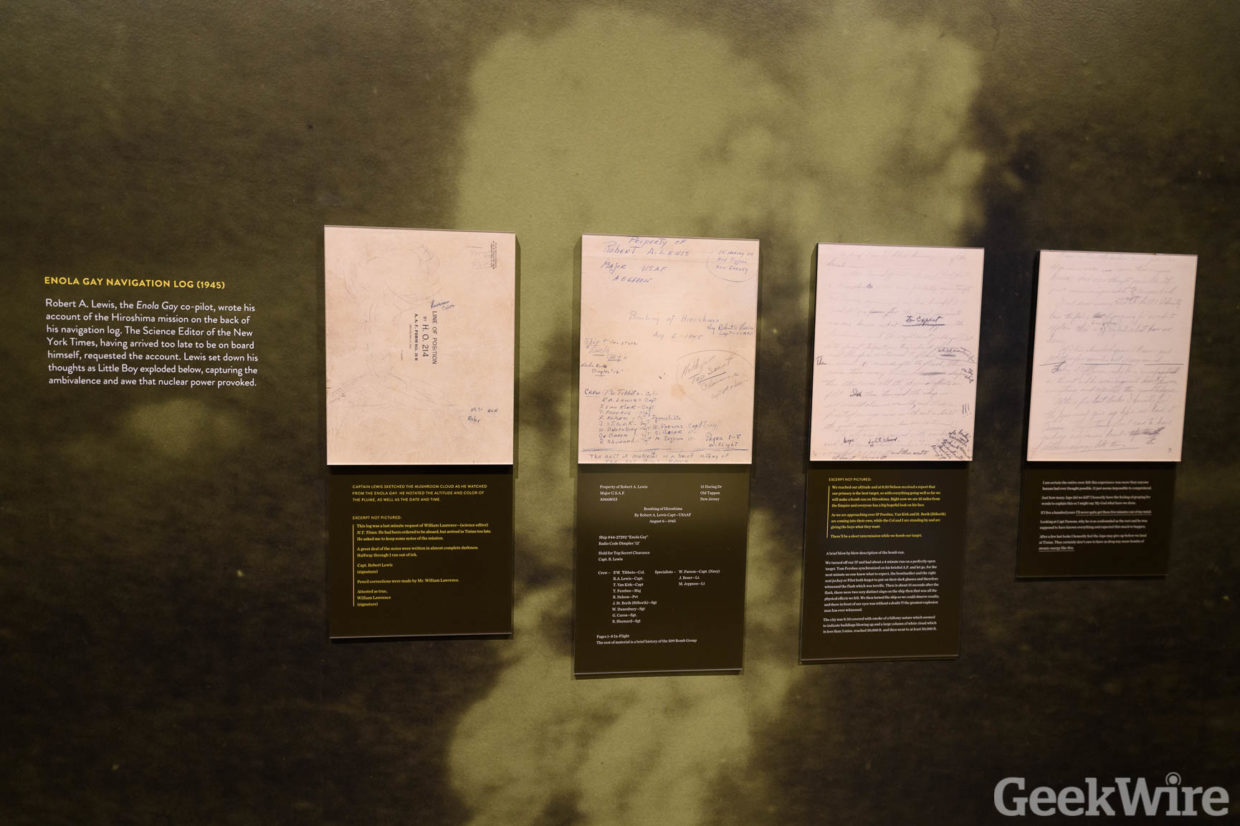 Replicas of notebook pages penned by Enola Gay co-pilot Robert Lewis include a sketch of a mushroom cloud. The original pages brought a price of nearly $400,000 in 2002 and are now part of Paul Allen’s collection. (GeekWire Photo / Kevin Lisota) 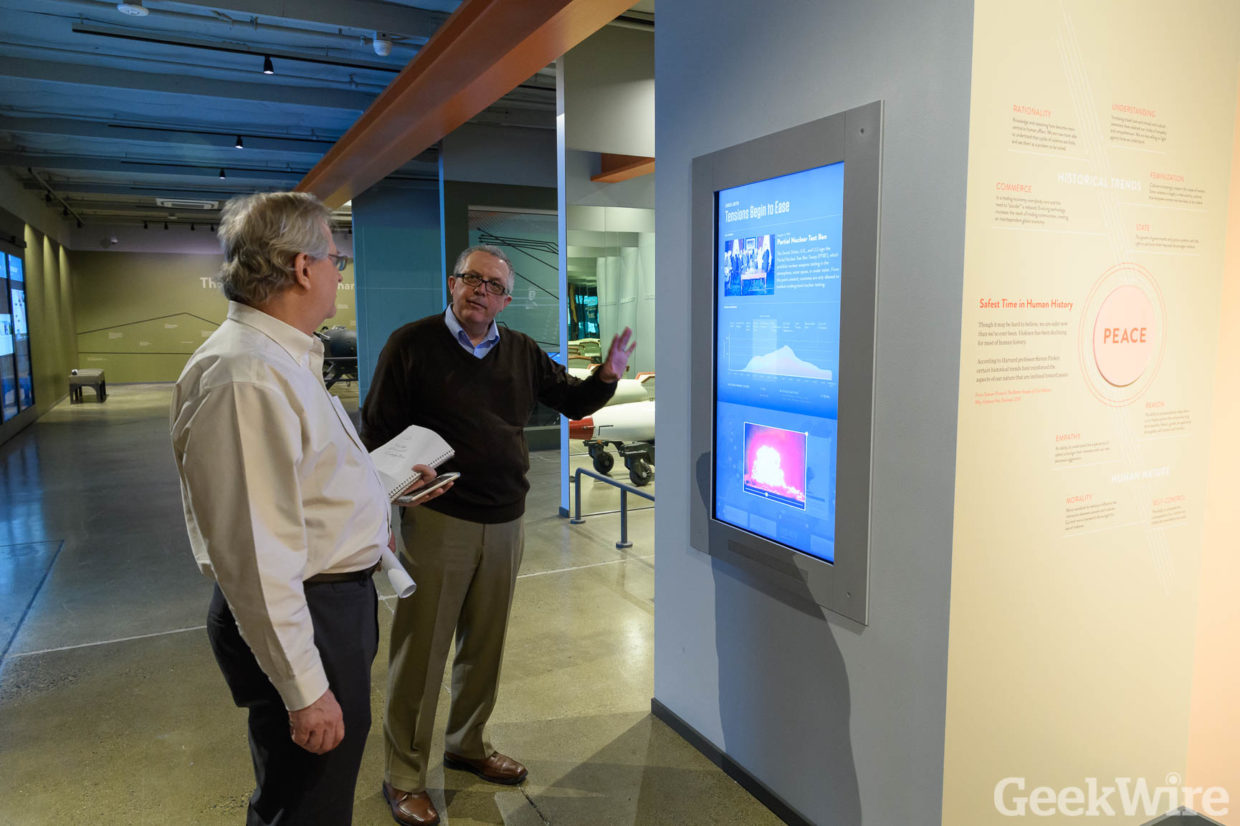 Adrian Hunt shows off a touchscreen that traces the ups and downs of nuclear proliferation and disarmament. (GeekWire Photo / Kevin Lisota) 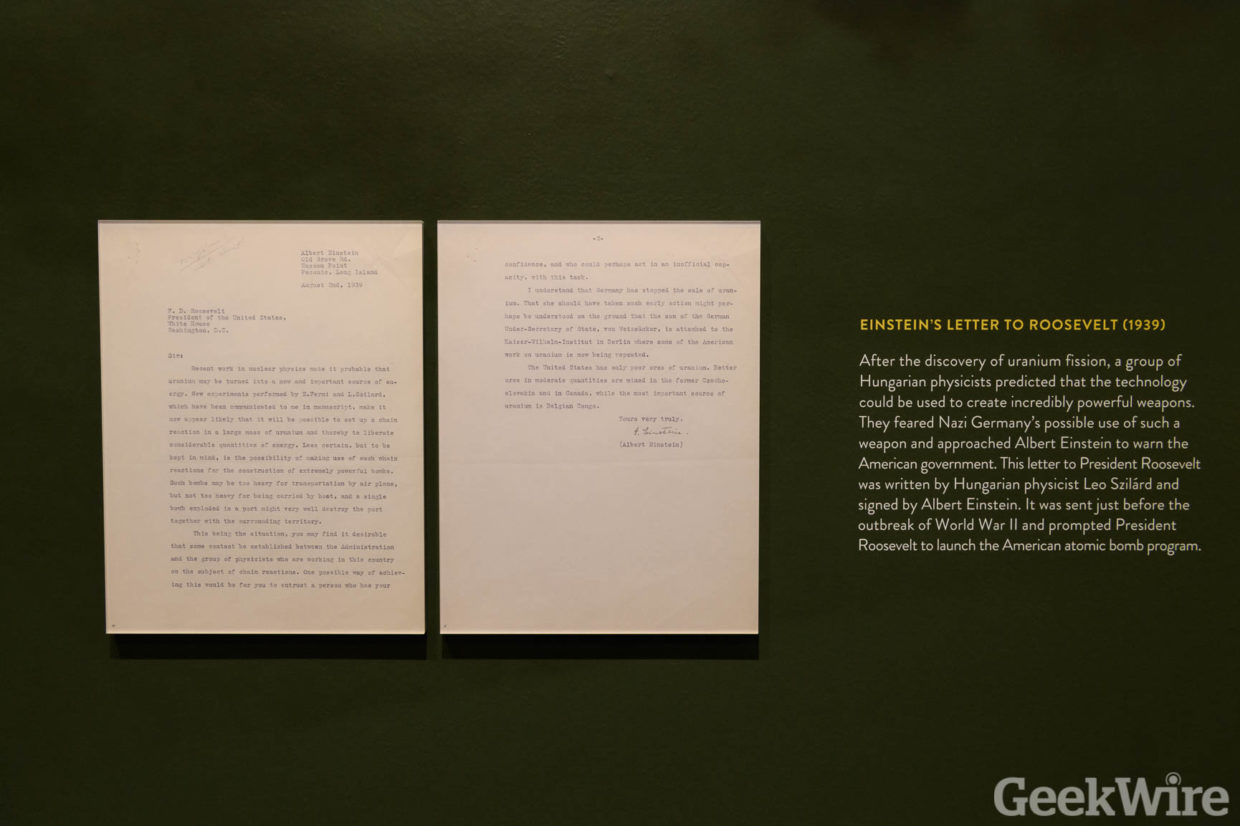 A letter from Albert Einstein to President Franklin Roosevelt, talking about the potential threat from nuclear weapons, is on display in the “Why War” exhibit. (GeekWire Photo / Kevin Lisota) 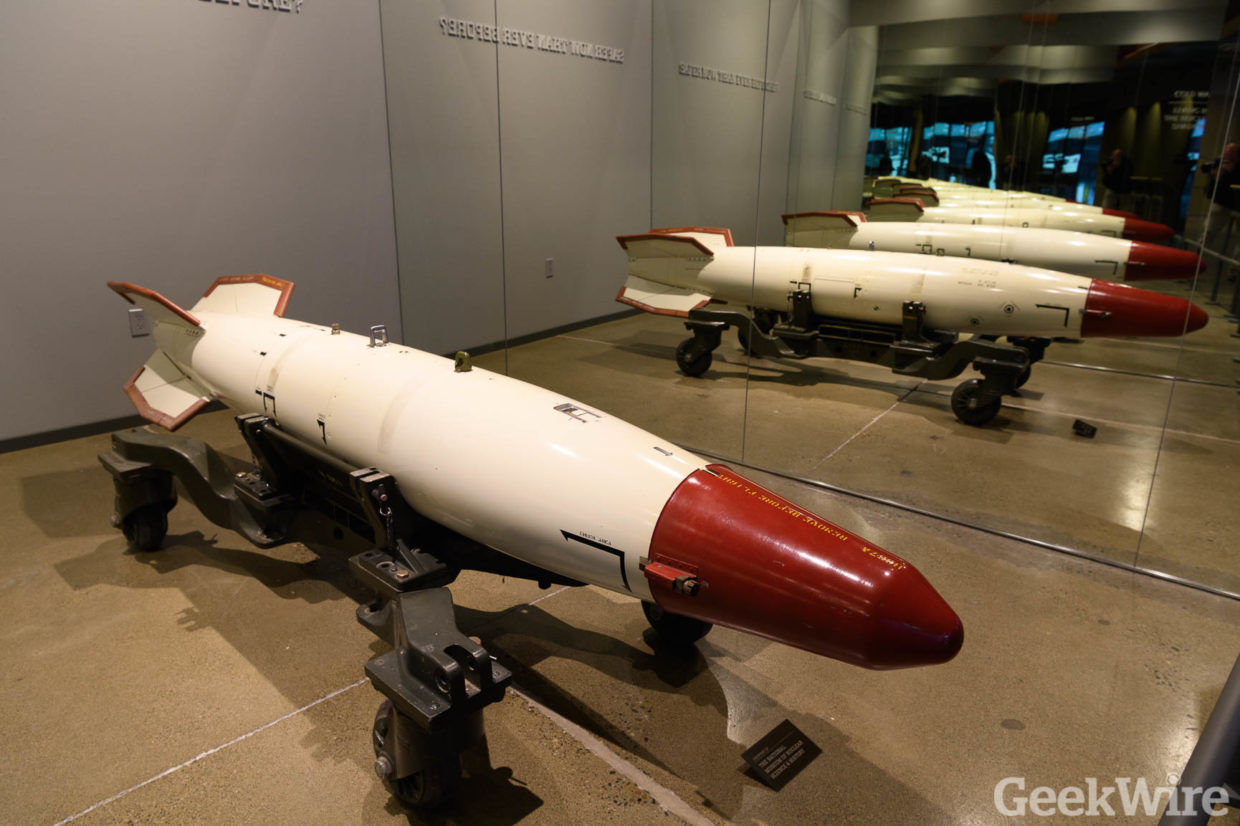 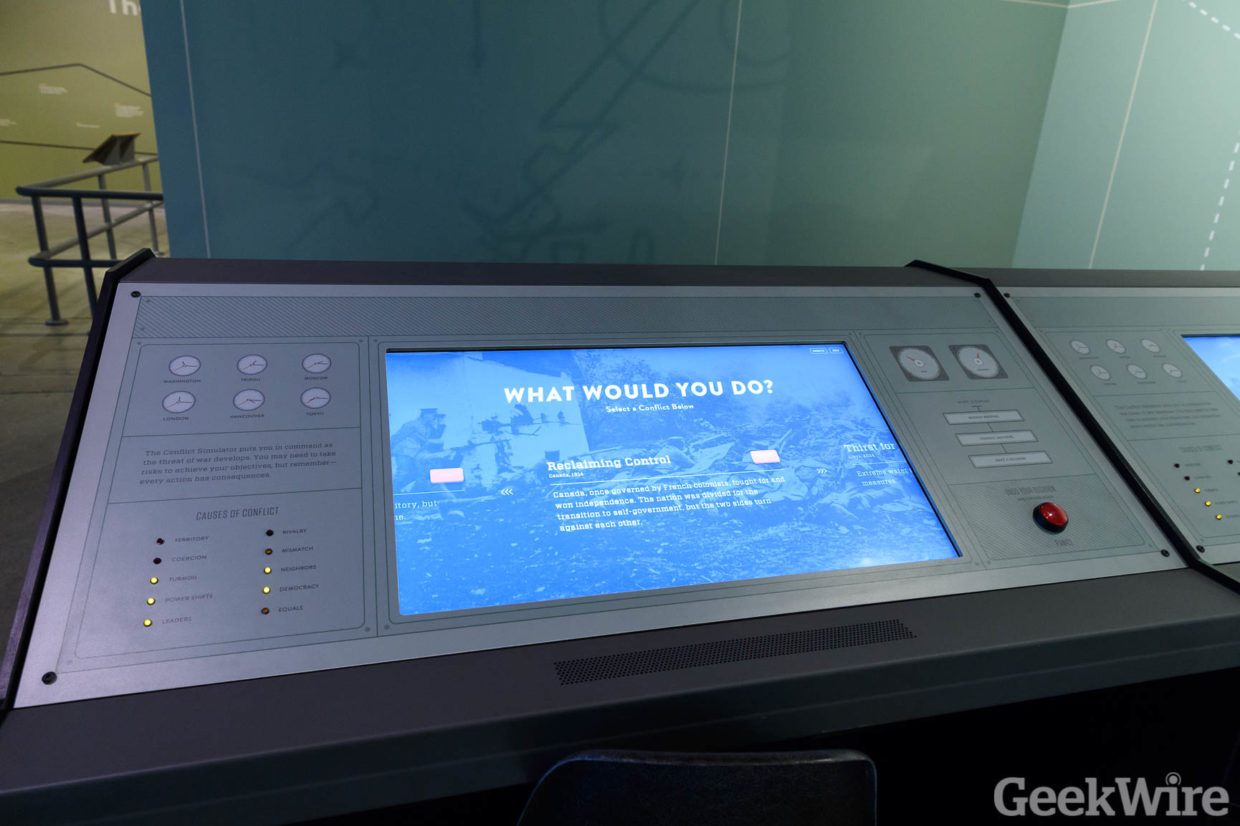 An interactive panel lets museumgoers select strategies for dealing with fictional crises – and provides a panic button at right in case things get out of hand. (GeekWire Photo / Kevin Lisota) 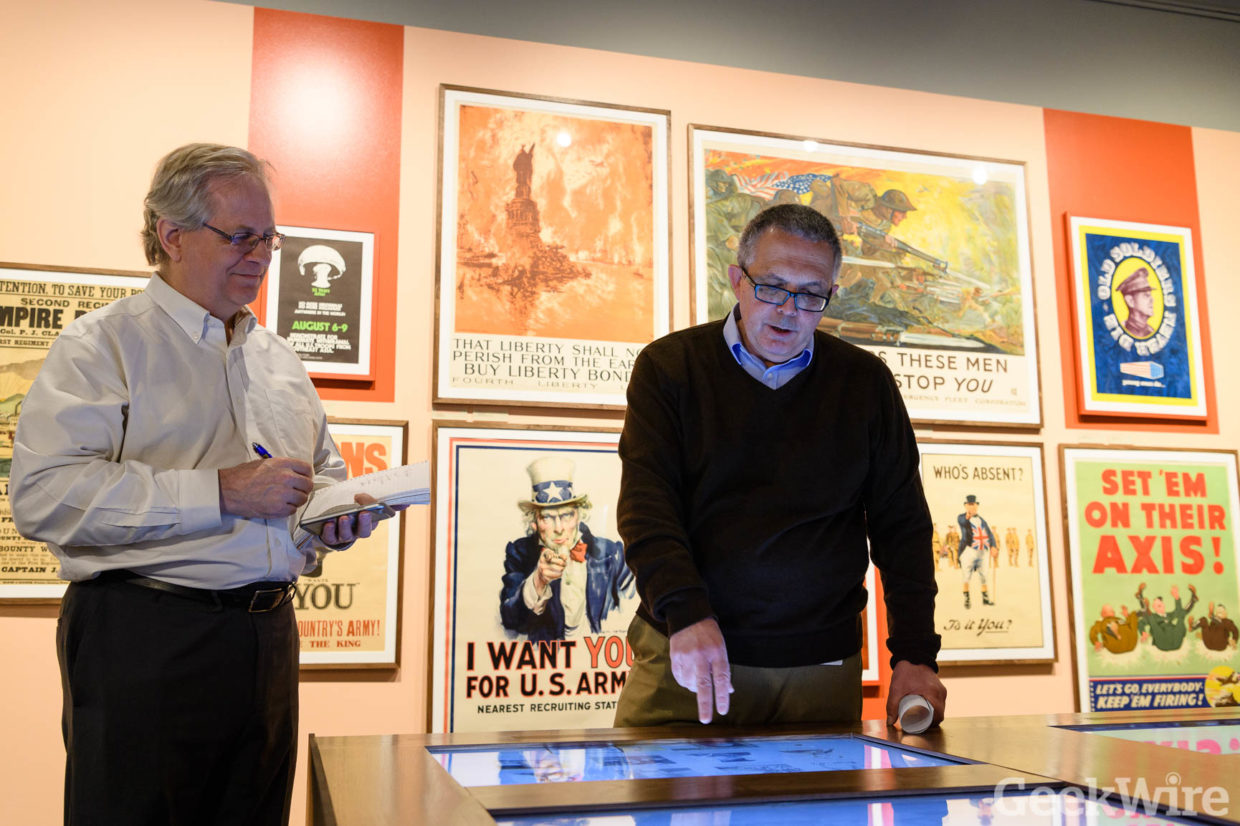 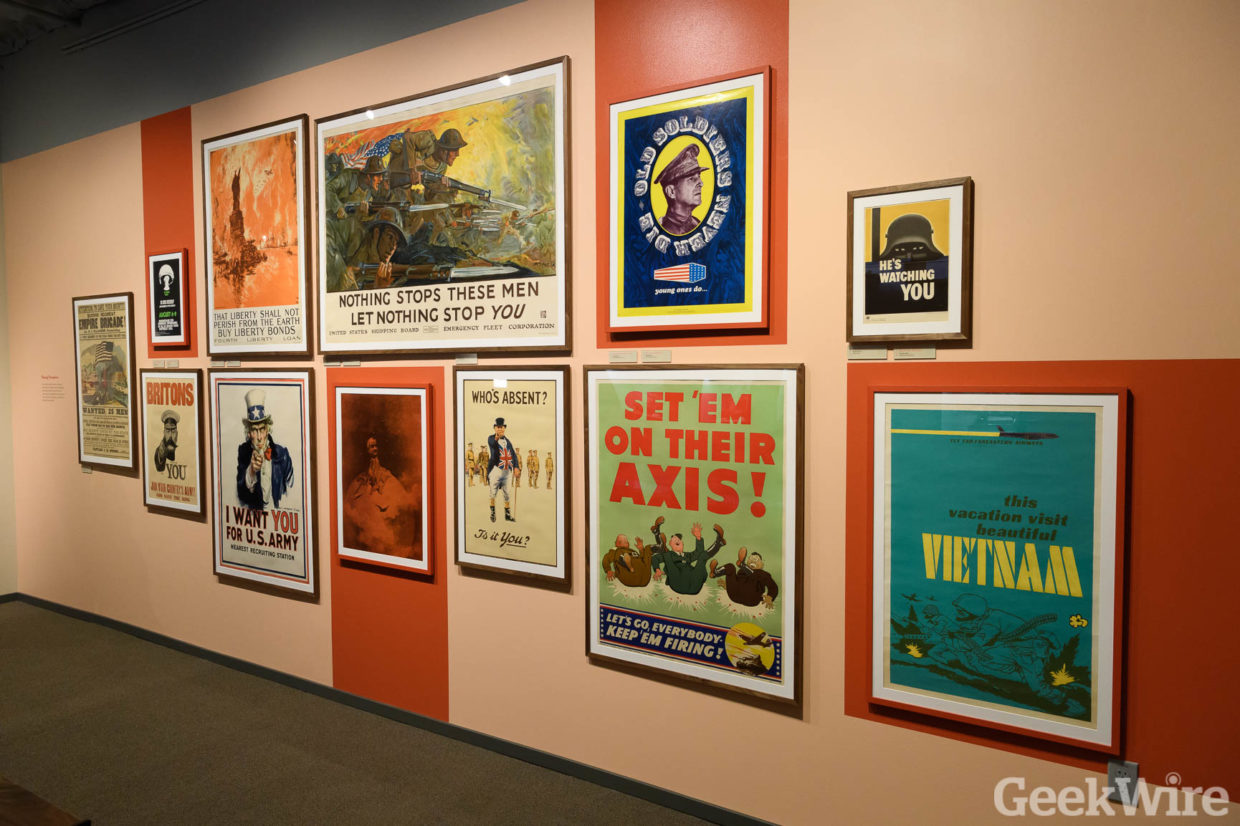 These posters on display in the “Why War” exhibit were aimed at whipping up sentiment for (and against) taking up arms. (GeekWire Photo / Kevin Lisota) 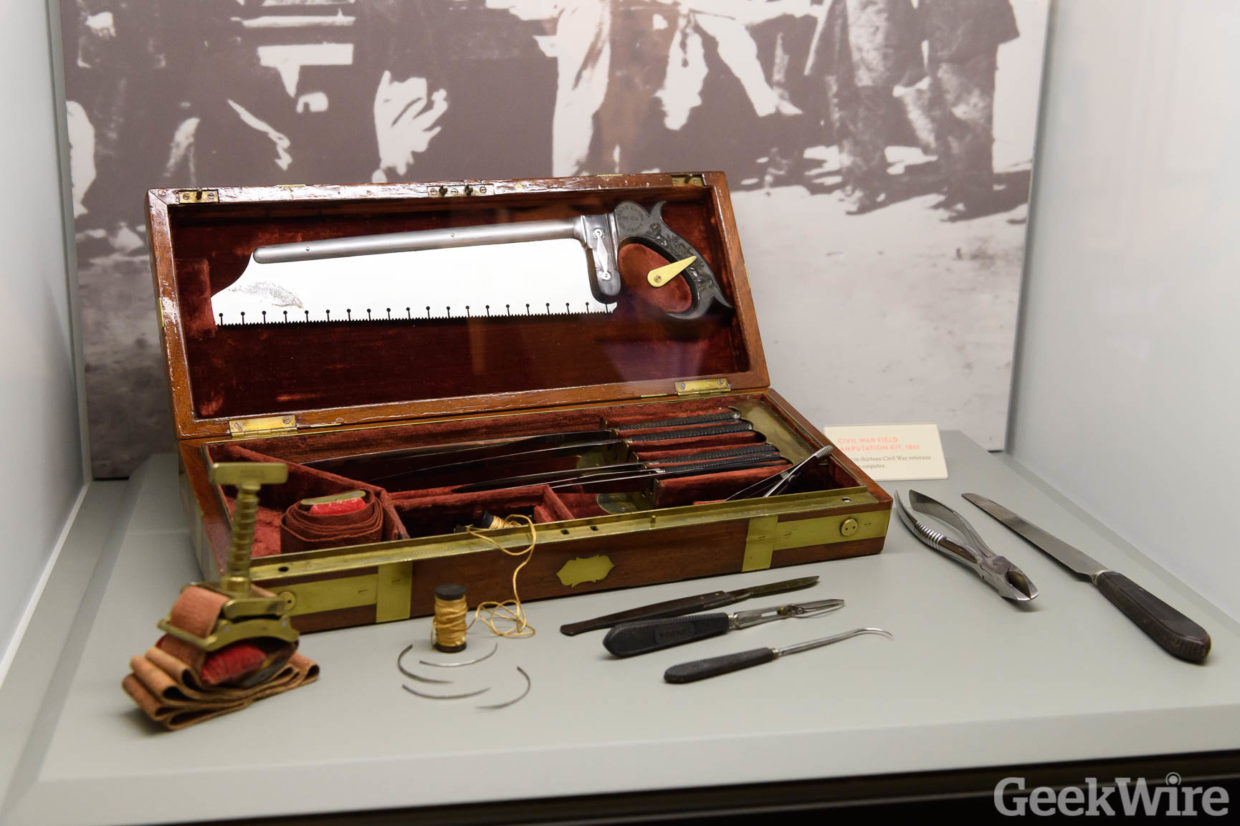 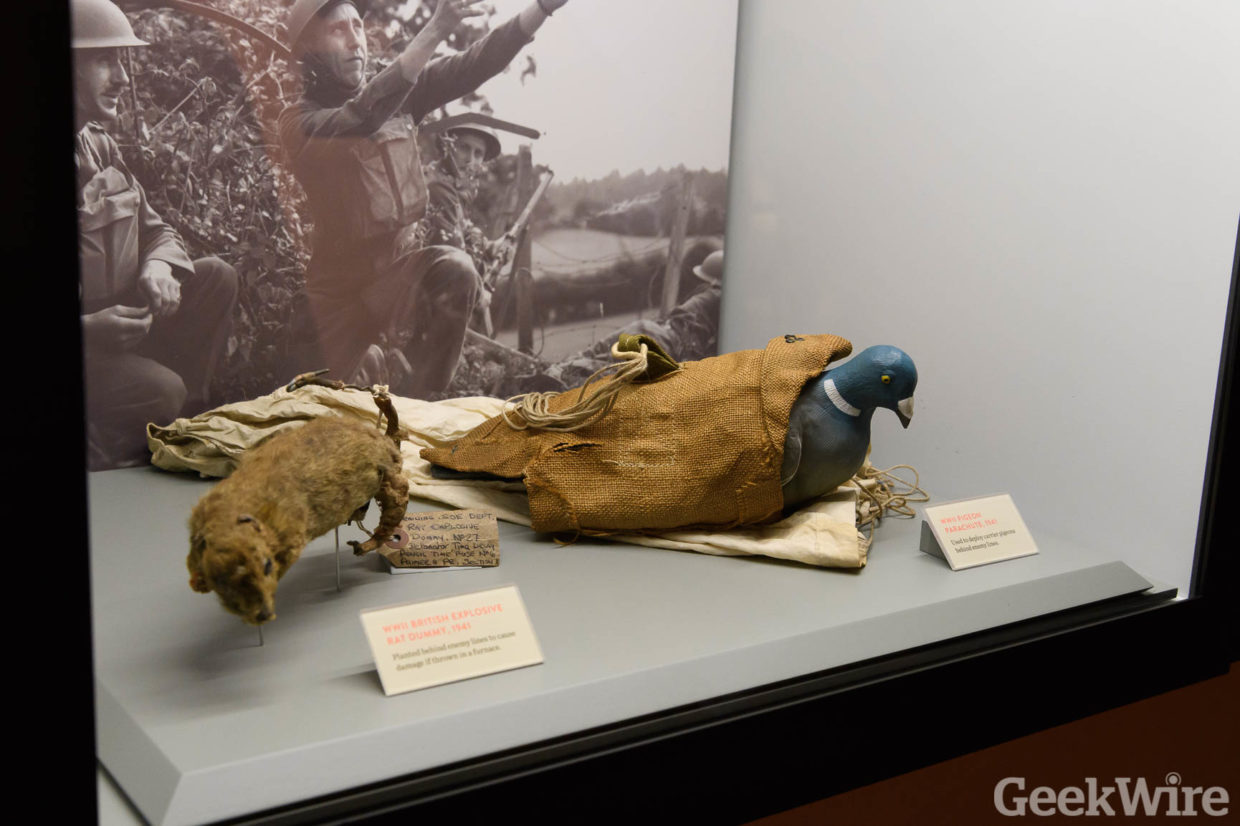 The biggest pieces in “Why War” are full-size replicas of Little Boy and Fat Man, the nuclear weapons that were dropped on Hiroshima and Nagasaki to end World War II. An authentic (but thankfully disarmed) B57 atomic bomb from the 1960s is also on display.

But the exhibit’s most telling items may well be a few easily overlooked sheets of typewritten and scribbled text. One document is a replica of a letter from Albert Einstein to President Franklin Roosevelt, warning of the nuclear threat. There are also replicas of notebook pages that were written by Enola Gay co-pilot Robert Lewis during the mission to drop the world’s first atomic weapon on Hiroshima.

“There’ll be a short intermission as we bomb our target,” Lewis wrote. Afterward, he wrote that “if I live a hundred years, I’ll never quite get these few minutes out of my mind.” (Hunt said Allen owns the original documents, which are kept under lock and key.)

One wall-sized display lays out the pros and cons of nuclear warfare, as enumerated by the National Museum of Nuclear Science and History. A touchscreen tutorial uses video and graphics to trace the ups and downs of nuclear proliferation and disarmament.

“We don’t want to avoid the difficult subjects,” Hunt said.

Hunt said the exhibit’s aim is to engage and inspire museumgoers of all ages, particularly students, and provide the wider context for all the instruments of warfare that are part of the Flying Heritage Collection.

Salisbury University’s Greg Cashman will give a talk tonight at the Flying Heritage Collection, focusing on the theme of his book, “What Causes War: What Do We Know?” Cashman says a half-century of research has produced significant “knowns” as well as areas of dispute. Doors open at 6 p.m., and books will be available for signing. The “Why War” exhibit opens to the public on Saturday. Admission to the museum is $14 for adults, with reduced fees for seniors, military personnel and youths.