Whole Foods may love Instacart, but there’s no love lost between the delivery startup and the grocery chain’s acquirer, Amazon, which is buying Whole Foods for $13.7 billion under a surprise deal announced Friday. 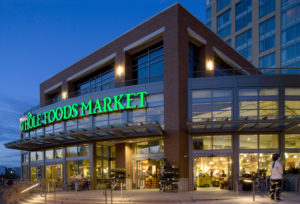 Instacart, which uses a fleet of “personal shoppers” to pick up and deliver groceries, was founded in 2012 by its CEO Apoorva Mehta, who worked previously in fulfillment and delivery operations at Amazon. The San Francisco-based company competes with Amazon’s Fresh and Prime Now delivery services, and since 2014 it has been a delivery partner Whole Foods, which has also invested in Instacart.

Asked about the impact of the Amazon deal, an Instacart spokesperson provided this statement: “From the beginning, we’ve been committed to helping grocers compete online. That’s more important than ever given Amazon just declared war on every supermarket and corner store in America. We already work with over 160 retailers across the country and look forward to partnering with many more.”

Bloomberg quotes an anonymous person familiar with the matter saying that Instacart has about four years remaining in its current delivery partnership agreement with Whole Foods, which makes the startup the grocery chain’s exclusive delivery partner for all perishable and most non-perishable goods at Whole Foods. The person says that “Instacart believes Amazon’s purchase won’t affect the arrangement,” Bloomberg reports.

From the beginning, we’ve been committed to helping grocers compete online. That’s more important than ever given Amazon just declared war on every supermarket and corner store in America.
If that holds true, it would limit Amazon’s ability to integrate its own delivery infrastructure, such as Prime Now one- and two-hour delivery, into Whole Foods in the short term. However, it might not prevent Amazon from rolling out new services such as Amazon Fresh Pickup at Whole Foods locations.

Instacart has raised about $675 million in venture financing from the likes of Kleiner Perkins Caufied & Byers, Andreessen Horowitz, Comcast Ventures and others, according to Crunchbase.

Shares of Whole Foods closed Friday at $42.68 — topping the $42 per share deal that Amazon reached for the Austin, Texas-based grocery store chain. That signals that investors are speculating about the possibility of another company launching a competing offer.

The acquisition would give Amazon a massive physical retail footprint. Whole Foods, which started in Austin, Texas in 1980, operates 465 stores in North America and the United Kingdom.