Maybe I am a cynical old journalist, but I’ve been in the anti-VR camp ever since it became the big buzzword in tech.

The reasons were many: It will take longer than many expect for a real market to develop. People don’t want to walk around with an obtrusive headset glued to their forehead. It’s an isolating experience. It’s too expensive. It’s simply overhyped. 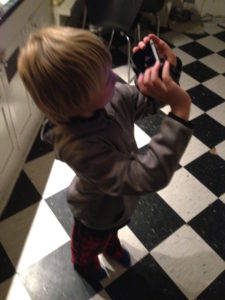 Those were my feelings until last night when my son found a rudimentary virtual reality headset tucked in my computer bag. Frankly, I had forgotten about the headset, which had been given away as a freebie at a recent event I attended.

But when my son emerged with the cardboard box holding the headset thinking it was a gift for him, I just rolled with it.

He opened the package, and at first was confused by the contents. “What is it?” he asked.

He quickly sprung into action unfurling the plastic device and realizing that it was meant to work with dad’s smartphone.

I started to take a little more interest in what was occurring, and read the directions on how this basic headset worked.

I had just returned from a real estate conference in New York where virtual reality was a hot topic. One of the sessions included remarks by Jenna Pirog, the virtual reality editor at The New York Times Magazine, who showed off how the newspaper was using the cutting-edge technology to enhance storytelling.

Mom, I am in the ocean! I see animals. A dolphin! A dolphin!

Knowing that The New York Times had some interesting content available, I immediately downloaded their VR app.

That’s when things got really fun, and my eyes opened to the possibilities of VR.

It was as if an entirely new world had opened for my son. He was fully immersed. The experiences seemed totally real to him, and he was having a blast.

He ran around the house, holding the headset to his face saying things like:

“A bison ran right in front of me. I saw one right in my face!”

One of the coolest things happened when I showed my son the New York Times’ VR experience for a story titled “Man on a Spire,” which Pirog discussed at the conference.

My son felt as if he were walking next to mountain climber Jimmy Chin as he scaled the 408-foot spire on top of 1 World Trade Center in Manhattan.

“I’m scared, I dropped. Where is he?” asked my son who believed he was atop one of the world’s tallest buildings. “I am going to walk off, whoa!”

It was a magical — and totally unexpected — experience. And while I still think VR is overhyped and a few years from mainstream adoption, I know at least one 7-year-old whose idea of experiencing the world was totally changed.

Asked what he thought about the experience after we tried to pry the device from his hands and get him to bed, my son simply said: “Virtual reality is so cool.”

And, for a brief moment on a random Friday night, this VR skeptic thought it was pretty cool, too!

UPDATE: My son woke up Saturday morning, and I am sure you can guess what he grabbed first?

That’s right, the rudimentary virtual reality headset. What are you doing I asked?

“Virtual reality,” he said with a confident and cool tone.

Meanwhile, the battle has already begun, with my wife already trying to cut down on virtual reality screen time. “I just need you to give it a break a little bit. I know it is exciting,” she said.