As an added benefit to those paying for Microsoft Azure, the tech giant announced that it will now offer Microsoft Azure IP Advantage, a new program that helps customers hit with intellectual property lawsuits.

“Our goal is to help foster a community that values and protects innovation and investments in the cloud,” Smith wrote in a blog post. “We want software developers to be able to focus on coding, and businesses and enterprises to be able to respond to the changing needs of their customers with agility without worrying about lawsuits.”

Smith noted that as more and more companies utilize cloud-based software services, there has been a rise in cloud-rated IP lawsuits from “patent trolls,” which do not sell actual products but profit off patent litigation.

Microsoft’s new program will allow customers to utilize 10,000 of the company’s patents, free of charge, for lawsuits against their services that run on top of Azure. It will also expand an existing service that provides resources to those fighting patent lawsuits to include “any open source technology that powers Microsoft Azure services, such as Hadoop used for Azure HD Insight.”

Finally, the program assures Azure customers that if “Microsoft transfers patents in the future to non-practicing entities, they can never be asserted against them.”

The program is an added benefit for customers of Azure, which competes with Amazon Web Services, Google Cloud, and others. Reuters noted that it’s designed to help an automaker, for example, that has auto-related patents but none for its mobile apps or connected car technologies that could put them at risk for litigation.

In its earnings report for the December quarter, Microsoft reached an annualized commercial cloud run rate of more than $14 billion, driven in part by its Azure cloud computing division.

AWS is still the market leader by a wide margin, although direct comparisons to Azure are difficult because Microsoft includes cloud applications such as Office 365 in its financial calculation.

In the December quarter, Microsoft’s “Intelligent Cloud” segment posted revenue of $6.86 billion, up 8 percent, and operating income of $2.39 billion. 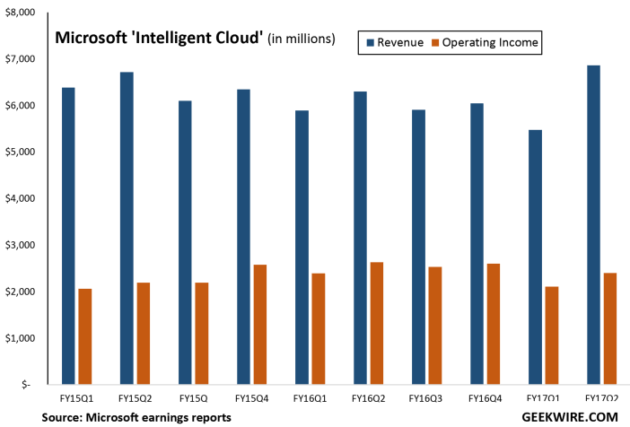 In a call with analysts after the earnings release, CEO Satya Nadella repeated his earlier vow that the company will reach $20 billion in annualized cloud revenue by the company’s fiscal 2018, which ends June 30, 2018.