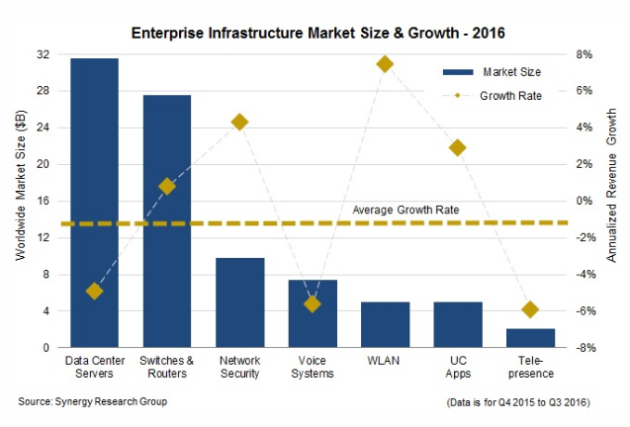 As cloud computing grows and swells the coffers of companies including Amazon, Microsoft, Google and IBM, it’s instructive to also note which firms the cloud’s growth is hurting.

“The trend toward pushing more and more workloads onto the public cloud means that the need for on-premises enterprise data centers is constrained or diminished,” said John Dinsdale, Synergy’s chief analyst, in an email. “The trend toward public-cloud companies using their self-designed servers manufactured under contract by original-design manufacturers (ODMs) substantially reduces the market opportunity” for servers. But, he added, the impact is strongest not on makers of enterprise servers but on makers of service-provider servers.

Both Amazon Web Services and Microsoft are moving to manufacture more of their own gear from generic or custom components.

The market for data-center servers is nearly $32 billion worldwide, but its growth rate has slowed nearly as much as that of voice systems and enterprise telepresence (teleconferencing): 6 percent.

“The main disruption to the market is being provided by the growth of cloud and hosted solutions, which are redefining markets and enabling new competitors to emerge,” said Synergy Research Group’s founder and chief analyst, Jeremy Duke, in a release.

Switches and routers, a $27-billion segment led by Cisco and HPE, respectively, grew by only 1 percent last year. That market, too, is being eroded as some hardware is replaced by software and as the public-cloud companies build some of the balance on their own.

The wireless LAN market enjoyed growth of 8 percent, and the market for network security products grew by 4 percent. Enterprise voice systems declined sharply, which makes sense considering they’re being replaced by unified-communications software (up 3 percent). The six-percent decline in the telepresence market also makes sense in light of the near ubiquity of apps like Skype.