Self-described serial startup guy Ed Petersen knows first-hand how much of a pain car maintenance can be.

His dealer was in Bellevue, Wash., where he commuted to work from his home in Seattle’s Queen Anne neighborhood. But when he stopped commuting to Bellevue, he still had to drop his car off at a dealer. He tried a different one in the University District, but that still took more than two hours out of his day.

“It is a huge time suck, and a huge inconvenience,” Petersen said of car maintenance. “People either plan their days around it, or they don’t do it, and neither of these are good solutions.”

Petersen has channeled his frustration into a startup: Wrench, a service that brings mechanics to the consumer. Using its website, customers can input work they need done and when and where they would like mechanics to go. Anything from an office parking lot to a downtown parking garage to a customer’s drive is fair game, though Wrench will not work on cars parked on the street for safety reasons.

How big is the market? Len Jordan, a Madrona managing director, said there are more than 120 million cars on the road that are at least 3 years old, with repairs on those vehicles amounting to $57 billion.

“Wrench takes a brick and mortar industry and leverages mobile, cloud, advanced analytics and supply chain efficiencies to bring a service to market that resonates with anyone who owns an older car,” said Jordan in a statement, noting that people at Madrona have been personally using the service and loving it. “As an investor the Wrench team has what we look for in early stage funding – a great team, a big idea, and a big market.”

Wrench is in beta mode, Petersen said, and it is operating in Seattle, Bellevue, Kirkland and Mercer Island right now. It has a deal with Bellefield Office Park in Bellevue, where tenants can schedule repairs and drop off their car at a location on site.

So far, Petersen said Wrench has 10 employees and three mechanics. It is looking for more mechanics through services like Craigslist and Indeed. All mechanics must have at least three years of experience and be Automotive Service Excellence certified. Background checks are done on all prospective mechanics. 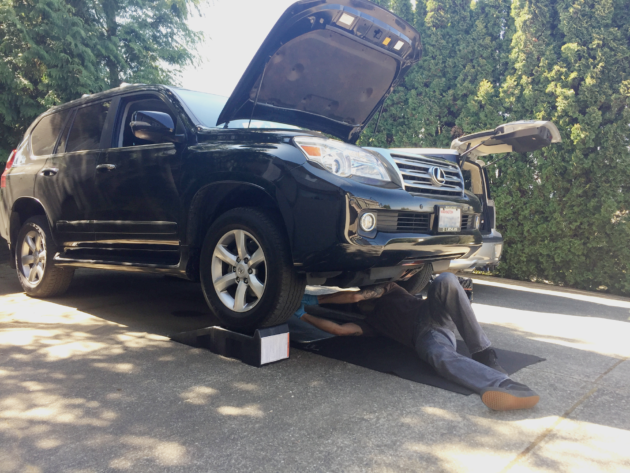 Petersen said approximately 80 percent of all automotive work can be done outside the shop. Its mechanics can do everything from a simple oil and filter change to replacing brake pads and rotors, timing belts, catalytic converters and diagnosing and repairing most ignition, electrical and exhaust problems. Wrench can work on pretty much every car.

Wrench offers a limited warranty of 12 months or 12,000 miles for its services.

Peterson said he has been working with the same team for more than a decade. They founded and sold Intelius, a public record search company, and TalentWise, which does background checks and other screening services.

Wrench is not the first automative-based startup to come out of Seattle. Earlier this year Booster Fuels, which allows car owners to request a fueling truck to fill vehicles wherever they are parked, got $9 million in funding, in a deal that also included Madrona Venture Group.

Investors are interested in automative startups because cars are important to people, Petersen said. Outside of a house, a car is typically the most expensive thing a person owns. Maintaining that car so it runs for a long time, is important, even if it is a hassle.

“We think we can provide that service in an easy and convenient way that will extend the life of a vehicle and save people money,” Petersen said.

Updated at 2 p.m. with comments from Madrona’s Len Jordan.