With the proliferation of so many messaging apps, from Facebook Messenger to WhatsApp to Snapchat, it may seem like SMS texting is not relevant anymore.

Zipwhip’s technology lets companies text their customers from the web, desktop computers and smartphones, working across the U.S. wireless carriers. Founded in 2007, the company originally targeted consumers and set out to be the “Facebook of text messaging.” But it pivoted around 2013, taking a different approach by enabling hundreds of millions of landlines to receive and send text messages for the first time. This allowed companies to text with their customers from landline phones and toll-free numbers.

That ended up being a smart decision, as Zipwhip has gone on to attract hundreds of clients from industries like insurance, automotive, staffing, fitness, transportation, radio, and medical that use Zipwhip’s technology for scenarios including customer service, appointment scheduling, and sales.

The business text messaging volume facilitated on its platform is up 300 percent year-over-year.

“Businesses are late adopters,” Zipwhip CEO John Lauer told GeekWire. “They don’t want the new thing and they don’t want to What’s App-enable or Facebook Messenger-enable their business. They just want to text-enable because everyone has texting.”

The fresh cash, which pushes total funding for the 100-person company near $20 million, will be used to grow the sales team and for product development. Zipwhip last reported that it was on pace to do $10 million in annual recurring revenue by Q3 of this year.

“We are going through such an amazing growth stage and the market we are tackling is so massive that it makes sense to raise more money to accelerate growth beyond what we’re already seeing,” Lauer said.

Zipwhip’s growth is a clear indication that SMS is still an important, and lucrative, messaging platform. Lauer noted that the most-used application on iOS and Android is still the native-texting app which comes pre-loaded on a smartphone.

“Texting is so ubiquitous but businesses are generally left out in the cold,” Lauer said. “Zipwhip’s goal is to solve that problem, and the way you solve it is to give businesses fast texting software.” 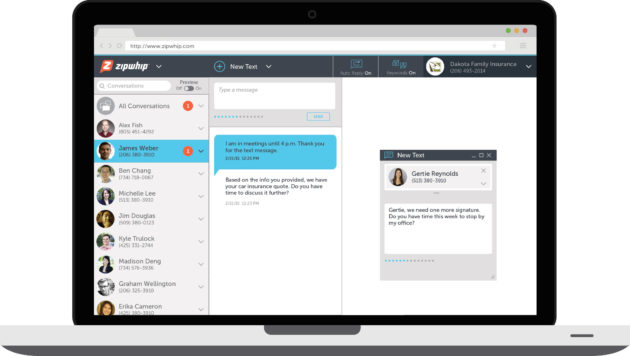 Zipwhip describes itself as a software-as-a-service company, versus a text messaging API — “a car dealership or dentist’s office has no idea what to do with an API,” Lauer noted. Its platform lets customers log into a web portal to read and send text messages.

“We build software that really is the equivalent of Microsoft Server Exchange in the cloud, and Outlook as the desktop client,” Lauer said.

Customers include car dealerships, whose salespeople use Zipwhip to negotiate the sale of a car over SMS, for example. Insurance brokerages, credit unions, radio stations, and sports franchises are also clients. After the first three months of using Zipwhip to improve fan communication with the team, the Portland Timbers customer service department reduced email activity by 34 percent and phone activity by 31 percent.

“They are conducting business over text messaging,” Lauer said.

Part of Zipwhip’s success is due to contracts it inked with big wireless carriers a few years ago that allowed the company to create industry policies which text-enabled existing hardline numbers. It also worked with carriers to enable commercial-grade, high-volume connectivity for their clients, who pay Zipwhip depending on the number of text messages they send and receive.

Lauer also said it is important to note that SMS is “the only open communication medium we have for messaging.”

“In an open ecosystem, everybody invests and everyone participates,” he noted. “The open nature of it is why it’s going to be here for many years to come.”

Lauer said Zipwhip may double its 100-person workforce by the end of next year. It plans to “significantly” grow its 50-person inside sales team.

The Microsoft Ventures investment in Zipwhip is notable, considering that it’s part of the first cohort of companies that Microsoft is backing via its new fund.

One of Zipwhip’s competitors, Haywire, was recently acquired by Salesforce. Asked about a potential acquisition, Lauer said that Zipwhip is “super-focused on growth.”