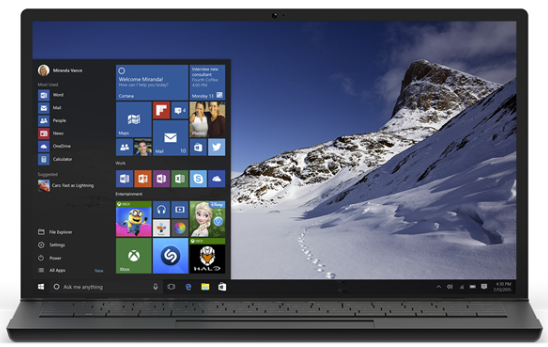 Cortana isn’t just for Space Marines any more: regular Marines and other members of the U.S. military may start using Microsoft’s AI assistant (named after the Halo character), on official machines starting soon.

The U.S. Department of Defense plans to bring Windows 10 to 4 million devices by February 2017. The rollout, announced today, will include laptops, desktops and mobile devices, adding to the more than 200 million devices already running Windows 10 around the world since the operating system launched in July.

The move isn’t just done for the sake of being up to date though; the DoD is worried about growing cybersecurity threats, which are a bigger problem on older systems, especially those that may no longer be getting vital security updates.

“It is important for the Department to rapidly transition to Microsoft Windows 10 in order to improve our cybersecurity posture, lower the cost of IT and streamline the IT operating environment,” DoD chief information officer Terry Halvorsen said in a memo last year.

However, the rollout is just beginning in full force now. With security features like the biometric verification measures in Windows Hello and the anti-malware service Windows Defender, the Pentagon feels that Windows 10 is secure enough for the nation’s military.

But it’s a striking departure from the old way of thinking about upgrades, where many institutions including the military stuck with what worked until the new systems were more thoroughly tested, often upgrading years after the general public.

And it’s not just software that’s getting the DoD stamp of approval today. The relatively new Surface Pro 4 and Surface Book were also approved for deployment in the U.S. military. Again, that means Microsoft’s products have met the Pentagon’s strong security requirements.

The rollout is supposed to be completed by February 2017, but each branch of the military is allowed a limited waiver authority for up to 12 months.