The Seattle-based startup, which developed a mobile email app to help users search for messages and other information, closed its doors last month.

Tipbit CEO Gordon Mangione told GeekWire today that it was a “painful” decision to shut down operations, but noted that the enterprise email business is “incredibly difficult.”

“Companies encourage and in many cases use default email products that come on the phone,” Mangione said. “As a result, we looked at where we were and decided it was best to shut down the service.” 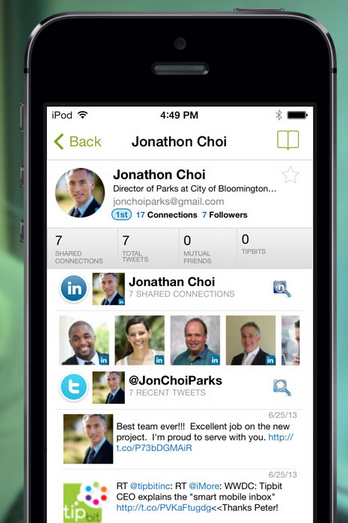 Tipbit’s smartphone app lets users opt-in to have their email folders indexed by the app, essentially creating a personal search engine that the app could query, speeding up the delivery of results.

The service worked with Microsoft Exchange in addition to Gmail, Google Apps, Yahoo Mail, Outlook.com and integrated services including Salesforce, Dropbox and Evernote, in addition to the major social networks.

The app also integrated with calendar, contacts and social networks to bring in additional information about people the user communicated with or met with, such as their latest LinkedIn, Twitter or Facebook updates.

Mangione said it was difficult to convince enterprise customers to move away from the default email app that comes pre-installed on smartphones.

“Enterprises have built up infrastructure around those default email programs,” he noted. “They are more comfortable with employees using default email products on the phones themselves. They don’t want a third party being able to have access to the employee email and would rather have it on the device itself.”

Tipbit had raised a total of $6.5 million from investors including Ignition Partners and Andreessen Horowitz. The company had 11 employees when it shut down and Mangione said they have all landed at new companies.

Mangione added that he still thinks the email search experience is “very much lacking” with our phones.

“If we could figure out a way so that you could continue to use the default email app, but augment it with search capabilities, that may have been our preferred path,” he said. “Unfortunately, there is very little way to extend the default email packages that come on these devices.”

As for Mangione, a former executive at XenSource and Citrix who previously led Microsoft’s Exchange and SQL Server businesses, the entrepreneur said he’ll be working with Ignition on his next adventure.