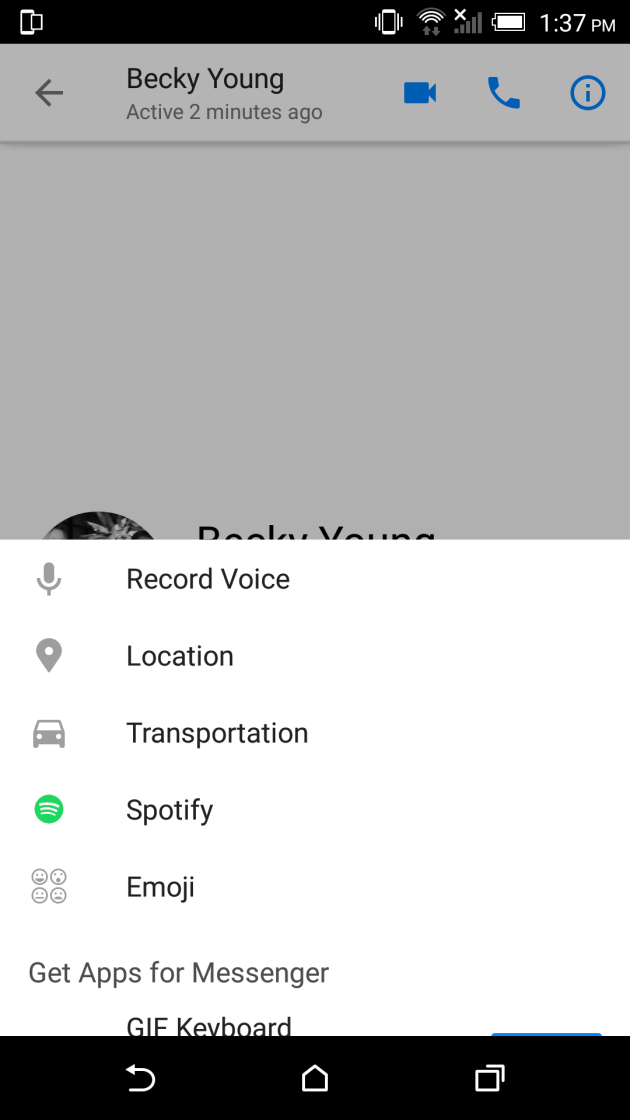 Music has arrived on Messenger.

Facebook announced today that its mobile messaging platform now integrates with Spotify. The new feature, which is rolling out to iOS and Android users, is the first music integration for Facebook Messenger and allows people to share their Spotify songs or playlists directly within a chat box.

Under the “More” tab, where users can also access an Uber ride or record voice, there is now a “Spotify” button that quickly opens the music app and lets you search for tunes. From there, users can pick a song, artist, or playlist and send it via Messenger. When someone clicks on the song, artist, or playlist in Messenger, it will open in Spotify.

“We’re making it easy for you to let your friends know what music you are loving at any moment,” Facebook wrote in a post.

Spotify has established itself as a leader in the music streaming industry, where it competes with Apple, Amazon, Pandora, and a handful of others. The company, which reportedly has close to 30 million paying subscribers, also inked a deal with Amazon last month to integrate its service into the Amazon Echo voice assistant.

The Spotify feature adds another element to Facebook Messenger, which has slowly integrated other applications like ride-hailing (Uber) and home improvement services (Pro.com) into its own platform.

Facebook is trying to turn Messenger into a remote control for our digital lives, similar to what Tencent’s WeChat is in China. When GeekWire traveled to Shanghai and Beijing in November, we noticed that everyone seemed to be using WeChat, which not only lets people send messages to one another, but is also a social media platform and a tool that lets people buy goods, pay utility bills, and hail a taxi ride, among other tasks.