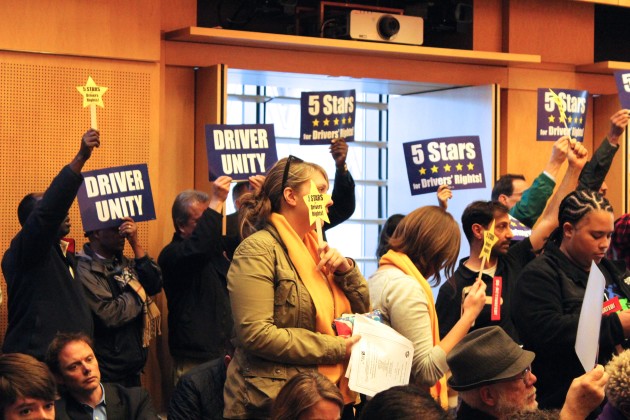 Seattle’s landmark law that lets drivers for ride-hailing companies like Uber and Lyft decide if they want to bargain collectively is set to go into effect in a little more than two weeks.

The city of Seattle is still figuring out parts of the first-of-its-kind law, and yesterday it quietly released final rules for some of the more important aspects of the ordinance. The new rules mostly confirm a set of draft proposals released last month. The final rules released Thursday cover issues like which drivers get a say in whether they want to unionize, working conditions subject to bargaining and how an organization gets certified to represent drivers exclusively. More rules will be released in the coming weeks.

The law, passed last year, gives drivers the ability to band together to negotiate pay rates and employment conditions, among other conditions. The law lets organizations that want to represent drivers get contact information from the ride-hailing companies to reach out to drivers and try and drum up support for collective bargaining.

Currently, these drivers are considered independent contractors and are not protected by traditional labor standards — including Seattle’s $15 per hour minimum wage law. They also do not have collective bargaining rights covered by the National Labor Relations Act.

The most controversial aspect of the law concerns which drivers get to vote on collective bargaining. New drivers who have been with their respective ride-hailing companies for less than 90 days prior to the kick-off of the law on Jan. 17 will not get a vote. Drivers also need to have made 52 trips starting or ending in Seattle during any three-month period in the last year to be eligible.

These eligibility conditions have rankled the ride-hailing companies, which favor giving each driver a vote. Following the release of the finalized rules, Uber’s General Manager for the Pacific Northwest Brooke Steger said in a statement that the law will disenfranchise many Seattle Uber drivers, a group she said now numbers more than 10,000.

The rules also fail to provide basic protections for driver privacy — protections that are essential for a fair and free election. The outcome of this process could have a significant impact on the flexibility and freedom of the more than 10,000 Seattleites who use the Uber app to pay their bills, feed their families or meet any number of other economic needs — no matter how much they drive. We are currently evaluating our options to prevent the City of Seattle from denying rideshare drivers a voice and a vote on their future.

Lyft echoed a similar sentiment, saying in a statement that “the final rules released by the City create an unfair, undemocratic process — disenfranchising nearly 50 percent of drivers who will end up with binding union representation they weren’t allowed to vote on. We strongly urge the Council to revise these rules and ensure the voices of all drivers are heard on this issue.”

The new rules stipulate that drivers will be able to negotiate on a variety of subjects. Here are some of the “mandatory subjects of bargaining” under the ordinance: safe driving and vehicle maintenance standards, pay and hours, how criminal background checks are administered and protocol for disciplining or terminating drivers. Drivers will also get to negotiate with their representative over dues.

Not just any organization can be certified to represent drivers. The city wants nonprofit groups with experience brokering employment agreements. Drivers must be allowed to be members of the organization and able to participate in major decisions.

After the law goes into effect in January, organizations that want to represent drivers must turn in a request to be certified by the city by Feb. 16. The city will decide which organizations are eligible to represent drivers in March, and then those organizations will have two weeks to let the ride-hailing companies know they intend to organize drivers. Ride-hailing companies will be required to turn over driver contact information to organizers in April. That starts a 120-day clock for organizers to gather support from a majority of drivers for collective bargaining.

The U.S. Chamber of Commerce filed a lawsuit in March against the city of Seattle, representing Uber and Eastside for Hire, arguing that the legislation violates several federal laws and would “burden innovation, increase prices, and reduce quality and services for consumers.” A federal judge dismissed the suit in August, but the legal fight is likely far from over.

In the past few months the city has struggled to implement the landmark law. City staff asked for an additional six months from the original September onset date to figure out some of the key issues, but a frustrated City Council Education, Equity and Governance Committee granted a shorter extension to January.