As an online retail giant, Amazon can use its engineering prowess and the vast capabilities of the digital world to track and analyze how customers use its site.

So it’s only natural that the company, in its first brick-and-mortar convenience store, would want to create a real-world version of the same thing.

The new Amazon Go store logs customers in when they walk through the door, knows instantly when they pick an item up from the shelf, automatically tallies what they put in their carts or shopping bags, uses past purchases to improve their shopping experience, and automatically charges their accounts when they walk out — no need for checkout lines — making it nearly frictionless to buy something.

In short, it’s a physical manifestation of Amazon.com.

The 1,800-square-foot store is also a new test of our willingness to trade privacy for convenience in the real world. We already leave digital footprints online. Are we ready for an e-commerce system to follow us down the aisle at the neighborhood market?

That’s one of the fundamental questions to be answered by the new store, unveiled by the company this week in its hometown of Seattle.

For now, Amazon Go is just for Amazon employees, as the company prepares for a public opening early next year. Amazon explained the basics in the video above and an online FAQ. But past patent filings by Amazon engineers and executives, some of whom ended up leading the Amazon Go team, go into much greater detail about their vision for a new type of store.

A store full of sensors 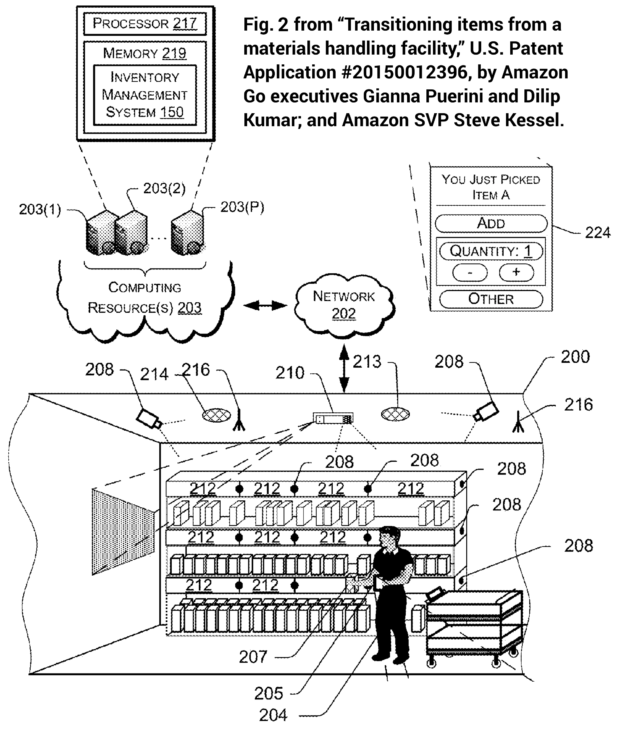 For starters, their vision involves a wide array of sensors.

This diagram appears in a pair of related patents by Amazon executives, which describe a variety of high-tech methods of tracking products, employees and customers through a facility such as a distribution center or a retail store. Here is the description of this chart from one of the patent filings.

Another diagram from the patent filing goes into greater detail. 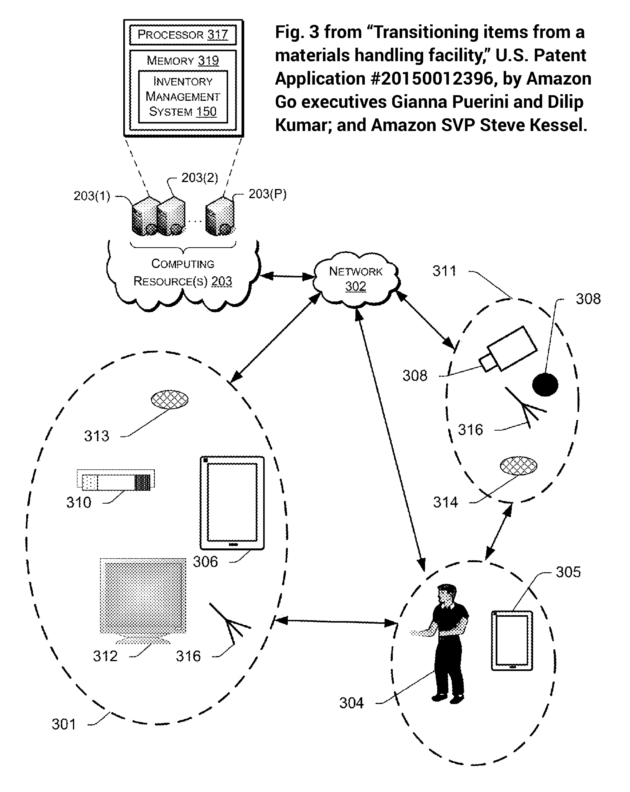 The filing explains the practical benefits of deploying this system of sensors and data in a retail store or a distribution center.

The filing also outlines how the system could follow users through the facility.

Another portion of the filing explains how the system could capture an image of someone’s hand as it crosses the plane of a shelf, analyzing the skin color to help identify the person’s hand, and determine whether the person was removing or placing an item on the shelf.

Of course, this is just a patent filing. It’s not clear which of these approaches the company will be using in the new Amazon store, and which might be reserved for use in an Amazon distribution center. Also unclear are the extent of the customer tracking technology being used in Amazon Go, and the related privacy policies and practices. Amazon declined GeekWire’s request to try out the store this week.

However, the gist of the patent filing matches the Amazon Go FAQ: “Our checkout-free shopping experience is made possible by the same types of technologies used in self-driving cars: computer vision, sensor fusion, and deep learning. Our Just Walk Out technology automatically detects when products are taken from or returned to the shelves and keeps track of them in a virtual cart. When you’re done shopping, you can just leave the store. Shortly after, we’ll charge your Amazon account and send you a receipt.”

Two of the inventors listed on the latest version of patent filing, Dilip Kumar and Gianna Puerini, have updated their LinkedIn bios to note that they are Amazon vice presidents. The third inventor on the latest patent filing, Steve Kessel, is an Amazon senior vice president who returned from a sabbatical last year to lead a “super secret” project, now believed to be Amazon’s high-tech physical retail initiatives.

So who cares if the store’s technology follows you through the aisles? We asked a variety of technology and retail experts whether privacy concerns about Amazon’s approach are likely to create pushback, either in customer acceptance or regulation. Or is it already too late for that?

“It may be too late for that, at least among the younger demographics, although, on the whole, Millennials haven’t shown much concern about privacy issues to date,” said Tom Caporaso, CEO of Clarus Commerce, in an email. “Grocery purchases are also less likely to cause concern than, say, pharmacy purchases might, so consumers could very well choose to use the technology in some places but not others.”

Larry Arnstein, vice president of business development and solutions at Seattle-based RFID technology company Impinj, pointed out one of the realities of the digital economy: “We tend to be willing to give up information to get good service,” he said.

One area where the store could help Amazon is in product recommendations, said Nick Manzo, the Global Omnichannel Lead of product information network 1WorldSync.

“Because the company would know exactly what consumers picked up and put back, or even the walking patterns of customers in store, Amazon would have a whole new set of consumer data to add to targeted promotions and ads,” Manzo said. “For some consumers, this may be a layer of intrusion that sparks a conversation on privacy issues, but for many, the difference in convenience may be worth it.”