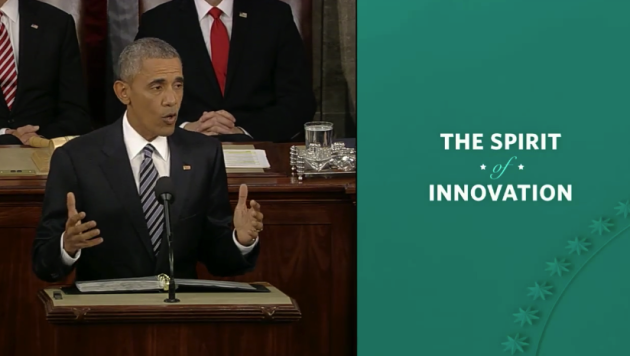 Innovation, science and technology were recurring themes during President Obama’s final State of the Union address on Tuesday night.

Microsoft CEO Satya Nadella was one of the invited guests of Michelle Obama — recognizing the Redmond company’s focus on “expanding access to computer science in K-12 classrooms,” as the White House explained in its announcement of the First Lady’s guests.

Our CEO @SatyaNadella a guest tonight at the State of the Union Address #SOTU pic.twitter.com/VlA010aNXW

During the speech, President Obama’s remarks about education were notable in part because they put computer science education on the same level as math.

“In the coming years, we should build on that progress, by providing Pre-K for all, offering every student the hands-on computer science and math classes that make them job-ready on day one, and we should recruit and support more great teachers for our kids,” he said.

So how close is the United States to offering every student hands-on computer science classes? A new report from Code.org, the Seattle-area nonprofit, puts things in perspective.

The report explains, “Although only 25% of U.S. schools teach computer science and computer programming, the field is growing at a rapid pace. Enrollment in computer science is exploding. Over 10% of all U.S. students in grades K-8 registered accounts to begin coding in just the last 2 years. CS is the fastest-growing AP course of this decade. For the first time, the diversity of participating students is improving, with enrollment growth by women and students of color outpacing enrollment growth by White and Asian males.”

See the full Code.org report here. Obama was the first U.S. president to write code, as part of Code.org’s Hour of Code initiative in 2014.

“In the last two years computer science has been embraced by the largest cities and school districts in the country, with full states taking steps to add the course to school curriculum options, and by Congress, with new federal education law,” says Hadi Partovi, Code.org founder, in an email to GeekWire.

“But at a time when 9 out of ten American parents want their children to learn computer science, most schools still don’t offer it. We need continued bipartisan efforts to give every child access to foundational 21st-century skills in our schools, and are energized by the President’s strong support.”

Here’s an archive of the full State of the Union address.